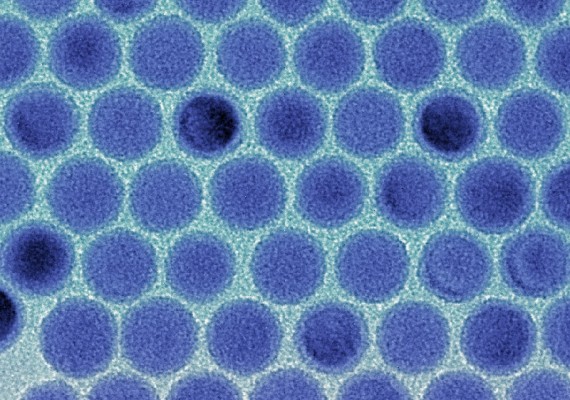 It is well known that one of the main problems with modern electric cars is the problem of energy storage. New better batteries are required to increase the range of electric cars and make them more attractive commercially. A new nanomaterial for lithium ion batteries developed in the labs of chemists at ETH Zurich and Empa could come into play here.

They provide power for electric cars, electric bicycles, smartphones and laptops; nowadays, rechargeable lithium ion batteries are the storage media of choice when it comes to supplying a large amount of energy in a small space and light weight. All over the world, scientists are currently researching a new generation of such batteries with an improved performance. Scientists headed by Maksym Kovalenko from the Laboratory of Inorganic Chemistry at ETH Zurich and Empa have now developed a nanomaterial which enables considerably more power to be stored in lithium ion batteries.

The nanomaterial is composed of tiny tin crystals, which are to be deployed at the minus pole of the batteries (anode). When charging the batteries, lithium ions are absorbed at this electrode; while discharging, they are released again. “The more lithium ions the electrodes can absorb and release—the better they can breathe, as it were—the more energy can be stored in a battery,” explains Kovalenko.

The element tin is ideal for this: every tin atom can absorb at least four lithium ions. However, the challenge is to deal with the volume change of tin electrodes: tin crystal becomes up to three times bigger if it absorbs a lot of lithium ions and shrinks again when it releases them back. The scientists thus resorted to nanotechnology: they produced the tiniest tin nanocrystals and embedded a large number of them in a porous, conductive permeable carbon matrix. Much like how a sponge can suck up water and release it again, an electrode constructed in this way can absorb lithium ions while charging and release them when discharging. If the electrode were made of a compact tin block, this would practically be impossible.

During the development of the nanomaterial, the issue of the ideal size for the nanocrystals arose, which also carries the challenge of producing uniform crystals. “The trick here was to separate the two basic steps in the formation of the crystals—the formation of as small as a crystal nucleus as possible on the one hand and its subsequent growth on the other,” explains Kovalenko. By influencing the time and temperature of the growth phase, the scientists were able to control the size of the crystals. “We are the first to produce such small tin crystals with such precision,” says the scientist.

Using uniform tin nanocrystals, carbon, and binding agents, the scientists produced different test electrodes for batteries. “This enables twice as much power to be stored compared to conventional electrodes,” says Kovalenko. The size of the nanocrystals did not affect the storage capacity during the initial charging and discharging cycle. After a few charging and discharging cycles, however, differences caused by the crystal size became apparent: batteries with ten-nanometre crystals in the electrodes were able to store considerably more energy than ones with twice the diameter. The scientists assume that the smaller crystals perform better because they can absorb and release lithium ions more effectively. “Ten-nanometre tin crystals thus seem to be just the ticket for lithium ion batteries,” says Kovalenko.

As the scientists now know the ideal size for the tin nanocrystals, they would like to turn their attention to the remaining challenges of producing optimum tin electrodes in further research projects. These include the choice of the best possible carbon matrix and binding agent for the electrodes, and the electrodes’ ideal microscopic structure. Moreover, an optimal and stable electrolyte liquid in which the lithium ions can travel back and forth between the two poles in the battery also needs to be selected. Ultimately, the production costs are also an issue, which the researchers are looking to reduce by testing which cost-effective base materials are suitable for electrode production. The aim is to prepare batteries with an increased energy storage capacity and lifespan for the market, in collaboration with a Swiss industrial partner.