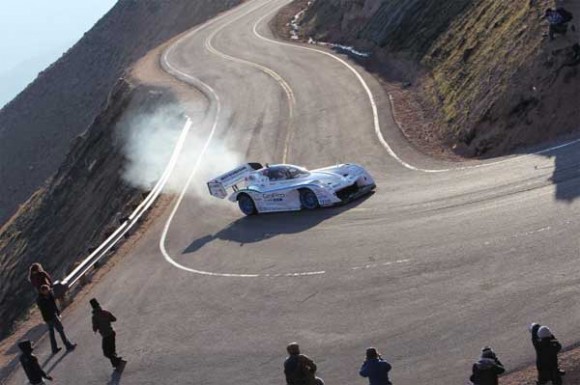 The world renowned Pikes Peak hill climb, a 97 year old race which has seen such luminaries as Mario Andretti and Bobby Unser, has long been a forum for racers, race teams and production companies with the hill being a proving ground for technology and design. Pikes Peak drove superchargers into common acceptance and has long tried the mettle of drivers and designers.  This year, two of the fastest men in race history will be testing electric vehicles at Pikes Peak and may sweep their competitors driving gasoline powered vehicles.  Carlin Dunne who holds the record in motorcycles and Nobuhiro “Monster” Tajima who holds the record in wheeled vehicles will both be racing electric vehicles.

Carlin Dunne who set the record in 2012 riding a 1200 CC Ducati to 9:52 was only a second slower then overall record holder Nobiro Tajima who in 2011 climbed the hill in 9:51.  This year Carlin Dunne will be riding the Lightning electric super bike. Lightning the premier electric racing team holds records at several courses and expects to hold the record at Pikes Peak.  In Time Trials this week, Dunne set lap times in the 4 minute range beating all other contenders and is looking at potentially 9:32 for the course.

Monster Tajima who drove the Toyota E-Runner last year in a disappointing DNF when the car caught on fire had been setting lap time records.This year coming back with an upgraded vehicle at 670 HP is looking to hit 9:30 himself.  Tajima will race against his own record as well as Rod Millen in the Toyota EMG PV 002 racer. 2013 could be the year silent, deadly racers take the crown and even makes a hat trick with 7 viable electric teams at Pikes Peak.