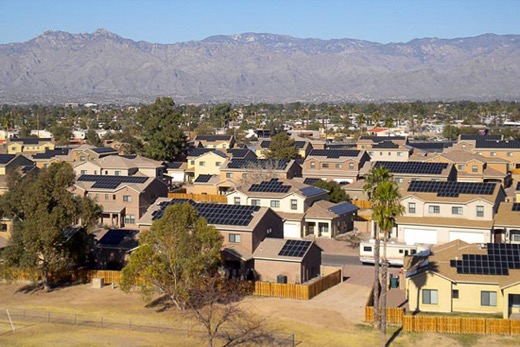 Solar taxes are taking off, especially in states whose fading utilities are afraid of losing their political and economic stranglehold on the energy industry. The latest disgrace is Arizona’s Tucson Electric Power, which is following in Arizona Public Service and Salt River Project’s clumsy footprint by complicating net metering progress with inequitable fees.

“At first glance, it looks extremely unfair,” said Solar Energy Industries Association spokesman Ken Johnson. “What Tucson Electric Power is proposing is that customers are able to offset their energy’s full retail credit, and the exports would be valued at what Renewable Portfolio Standard projects are being paid. No other state does that.”

Doing so would “slice rooftop solar rate benefits,” according to an insightful analysis from the Arizona Daily Star. It noted that, thanks to the decreased emissions of home solar and net metering, TEP’s photovoltaic pioneers pay an average of $15 a month for service. Meanwhile, the utility’s traditional customer base, whose energy comes from oil, gas and other dirty fuels, pay an average of $117. The analysis also noted Sierra Club’s math, which explained that not only are net metering pioneers investing millions in TEP infrastructure by basically building mini-power plants on their houses, but also that “the real subsidy at TEP goes to mines and other industrial customers, who use about 21 percent of the utility’s total electric load, but pay barely 7 percent of its revenues.”

“The other 42 states that have net metering all allow for full retail value,” Johnson told SolarEnergy.net. “Obviously, what Tucson Electric Power wants to do will seriously hurt the solar value proposition and, in all likelihood, scare off many people in Arizona from investing in rooftop solar. Simply put, these types of issues should be settled by state regulators as part of a comprehensive rate case.”

If TEP’s unfair proposal is accepted by the Arizona Corporate Commission, its rambling press release explained, it would not affect customers who have already installed solar systems or those who submit grid connection requests by June 1. But that process is sure to be problematized by recent allegations of political corruption at the Arizona Corporate Commission, which is charged with being too cozy with the Arizona Public Service.

Revelations from a whistleblower inside APS argue that now-retired ACC commissioner Gary Pierce — a Republican who owned a string of automobile dealerships and gas stations before joining the Arizona House of Representatives, for which he pulled in over $360,000 in campaign contributions from the ACC — colluded with APS CEO Don Brandt and steered money targeting two Democratic competitors. Pierce allegedly also offered the whistleblower, his own executive assistant, a promotion in exchange for silence on the matters. It didn’t work.

None of this inspires much confidence that the ACC is capable of fielding TEP’s unfair proposal in an equitable manner. Nor does Attorney General Mark Brnovich’s investigation into Pierce’s alleged wrongdoings, given that the AG is also a Republican as well as a recipient of $425,000 in campaign contributions from APS’ parent corporation, Fortis Inc. Add it up, and you have a one-sided power move against the state’s solarizers, who are, more and more, voting with their roofs.

“Even better, this investment in local solar energy is helping keep rates low for all of us,” she added. “Numerous studies have now indicated that the grid benefits from net metered clean energy systems outweigh the costs. Net metering is compensation for self-generated power that customers are selling back to the utilities — reducing the need for polluting traditional utility power plants and other expensive infrastructure.”

The concept that all of this forward-thinking assistance from the public it is supposedly serving is somehow bad for TEP, APS, SRP or any other utility trying to hold onto the past is ridiculous. From its alleged political corruption to its obvious economic preference for non-solar customers, Arizona’s utilities, and their parent corporations, are putting themselves on the wrong side of the inevitable renewable energy future, and history itself. Whatever short-term costs they may score against solarizers are vastly outweighed by the long-term losses they will incur by making the most bone-headed of maneuvers.

“For whatever reasons, rooftop solar in Arizona is now under assault from one end of the state to the other,” Johnson said. “Without an independent study to determine the true value of solar, the Arizona Corporation Commission would be shooting in the dark when it comes to ruling in a case like this. The fairest way to resolve this dispute is for the ACC to stick to its established rate case procedures. It’s hard to imagine that 42 other states all have it wrong.”

Previous ArticleElon Musk’s next disruption: residential energy storageNext ArticleSolar Power To Become Cheapest Source Of Energy In Many Regions By 2025