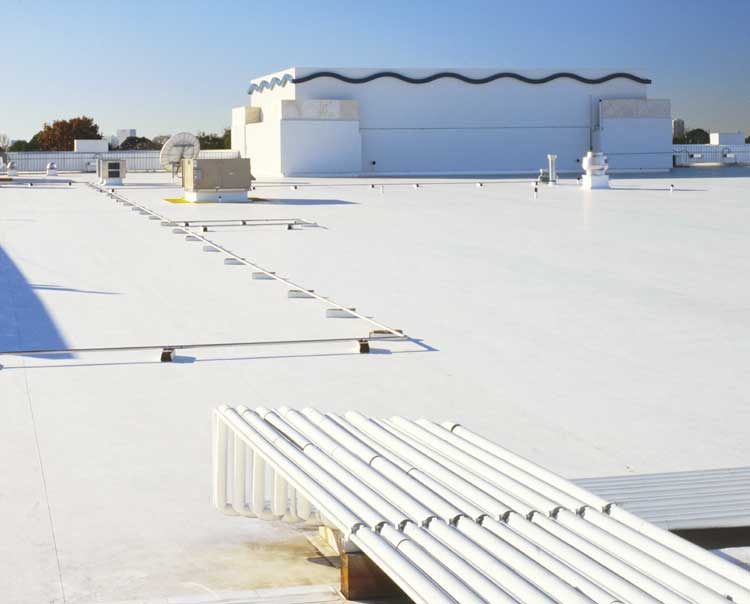 It’s no surprise that white roofs triumph over black ones when it comes to mitigating climate change, but as a recent study points out – on economics at least, white roofs also beat out green roofs.

“Both white and green roofs do a good job at cooling the
building and cooling the air in a city, but white roofs are three times more effective at countering climate change than green roofs,” says Arthur Rosenfeld, scientist emeritus at Lawrence Berkeley National Lab, and co-author of their report that compares white, green, and black roofs based on economic benefits.

The study compares the three kinds of roofs on their cost-effectiveness over a 50-year time span by analyzing 22 commercial flat roof projects. It assumes a 20-year life for white and black roofs and 40 years for green roofs.

While green roofs provide stormwater management and clean the air along with other benefits, they don’t cut energy use as much, the study concludes. White roofs reflect about three times more sunlight than green roofs – they can be 50°F cooler during the heat of summer, keeping building interiors several degrees cooler.

This was clearly demonstrated last spring in Chicago’s
“Battle of the Bulbs” competition when two buildings – one with a green roof, the other with a white roof – competed on which had lower electric bills. The white roof won, saving more than $40,000 in electric bills over the green roof.

And white roofs are cheap – all it takes is a coat of paint, while it costs $10-$35 per square foot for a green roof.

“When we started the study it wasn’t obvious that white roofs would still be more cost-effective over the long run, taking into account the longer service time of a green roof,” notes Benjamin Mandel of Berkeley Lab.

One thing that’s certain is that black roofs have got to go – in addition to being a poor choice in terms of energy bills and climate change, they pose significant health risks during the summer in urban areas.

“In Chicago’s July 1995 heat wave a major risk factor in
mortality was living on the top floor of a building with a black roof,” says Rosenfeld. He hopes the study will influence government policymakers to ban or at least phase out black roofs in warmer climates.

“White roofs win based on the purely economic factors we
included, and black roofs should be phased out,” he says.

But, Berkeley Labs also points to the benefits of green roofs that could make them more attractive than white roofs, even though they cost much more.

The folks in Chicago agree. Thanks to City Hall’s green roof, 60% less water flows through the city’s storm sewers during rainfall events and the plants growing there provide habitat for birds, insects, and other wildlife, as well as absorb greenhouse gas emissions.  Then there’s the aesthetic value of green roofs, which
often double as open space park land.  They also increase the energy production of solar panels.

While cool roofs have been part of building standards in California since 2005, and are used in nearly two-thirds of flat, commercial installations in the West, they have yet to really take off elsewhere.

In Los Angeles – the first city to mandate cool roofs on homes – a study finds the switch will not only reduce the heat island effect, but it can save $30 million on energy bills, cutting greenhouse gases as much as taking 7 million cars off the road for a year.

“Cool roofs are one of the quickest and lowest cost ways we can reduce our global carbon emissions and begin the hard work of slowing climate change,” said Steven Chu, former Secretary of the Department of Energy, as he directed the agency to install them during renovations.

In 2009, Rosenfeld co-authored a study that estimates the world could offset 44 billion tons of carbon emissions by making roofs and pavements more reflective. Another study shows that cool roofs could offset the emissions of roughly 300 million cars for 20 years.

Read the report, “Economic Comparison of White, Green, and Black Flat Roofs in the United States”:

Previous Article3D Printing Can Save Our PlanetNext ArticleEverybody Solar and RE-volv: Crowdfunding Rockstars