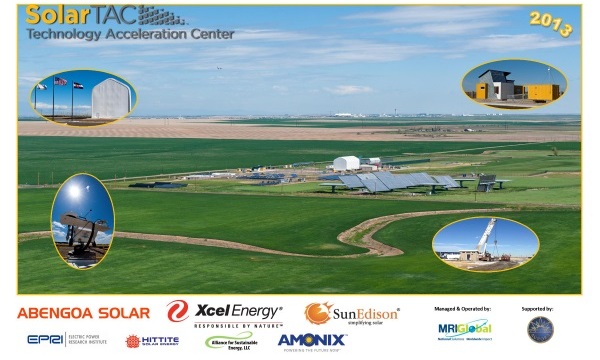 “In a rapidly expanding solar market, there exists a need to fine tune early commercial and near-commercial technologies before deploying them in the field by testing for reliability and optimized performance, and to secure financial backing,” says Dustin Smith, SolarTAC executive director. “SolarTAC was developed to provide a real-world testing environment that can fulfill these requirements and take emerging technologies to the next level.”

The facility’s location in Aurora, Colo. provides more than 320 days of sun each year, which makes it ideal for solar research (especially with its close proximity to the National Renewable Energy Laboratory and the Denver International Airport).

The concept for a solar technology testing facility began in 2007 with Xcel Energy. The public utility, along with other founding members SunEdison and Abengoa Solar, provided the initial funding, while the City of Aurora provided 74 acres and an accelerated permitting process to expedite project development at the site. Non-UL listed technologies can be permitted in six weeks or less. SolarTAC is managed and operated by Kansas-based MRIGlobal, an independent research and development organization that delivers global solutions in energy, health and defense.

Membership is open to all of the solar industry including electric utilities, solar technology developers and solar equipment suppliers. Four levels of membership are available, opening participation to all companies. See the chart above for membership levels.

A variety of projects are underway or in the planning stages at SolarTAC, including a facility to test thermal-storage media, side-by-side evaluations of PV system performance and a test of 2-axis tracking and optics for a CPV system and utility scale batteries. Additional projects include long-term reliability testing of a CPV system, the development of a solar thermal trough system and evaluation of different CPV systems. SPW