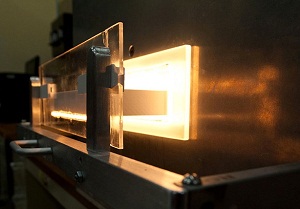 Once photovoltaics are put into operation they can provide decades of power, but there’s a lot of energy that goes into making them, too. The National Renewable Energy Laboratory (NREL) and AOS Solar have developed the Optical Cavity Furnace. It’s a new type of furnace that uses light and optics rather than other sources to create silicon-based photovoltaic cells. The new process uses only half the amount of energy to make conventional PV.

The new furnace uses a series of lamps in a reflective chamber to create temperature uniformity at high-heat levels throughout the chamber. It’s so uniform that when heated up to 1,000 degrees Celsius, the entire furnace only varies by a few degrees. The heat is used to convert silicon wafers into full-fledged photovoltaic cells.

“Its main purpose is to process the wafers into solar cells. We have developed the furnace configurations for major steps used in silicon solar cell fabrication—junction formation, oxidation, and metallization firing,” said Bhushan Sopori, NREL’s principal engineer on the project.

Furnaces now used in the production of silicon-based photovoltaics are thermal furnaces that use radiant or infrared heat to quickly boost the temperature of silicon wafers. However, it takes a lot of energy to heat and cool them.

In the optical furnace, the wafer itself absorbs the energy that otherwise would be lost. NREL likened the technology to a microwave oven, because only the wafers heat up, not the whole container.

The new method reduces the amount of impurities in photovoltaic cells, resulting in a photovoltaic cell that’s about 4 percent more efficient. It’s able to do it partly because it heats cells up at a slower rate allowing them to absorb the light energy and pushing impurities out. The optical furnace also works on both types of silicon wafers, according to Sopori.

“We have done extensive work on multicrystalline silicon and are now working on monocrystalline cells,” he said.

The lab also is working with AOS Solar to develop the first commercial Optical Cavity Oven.

“This will be done at AOS Solar. AOS Solar is in the process of raising funds to build a commercial, 2,000-wafers-per-hour system,” Sopori said. He projected that the first metallization Optical Cavity Furnace could be built in a year.

A number of companies have shown interest in the new furnace, according to NREL.

“Some of the processes can be incorporated into existing lines. For example, metallization firing and oxidation,” Sopori said. “Our junction formation uses a newer, lower cost technology.”

That would require some changes to make it work with existing processes, he said.

Previous ArticleInterview With British Solar King Jeremy LeggettNext ArticleThere is More Than Enough Space in the U.S for Solar