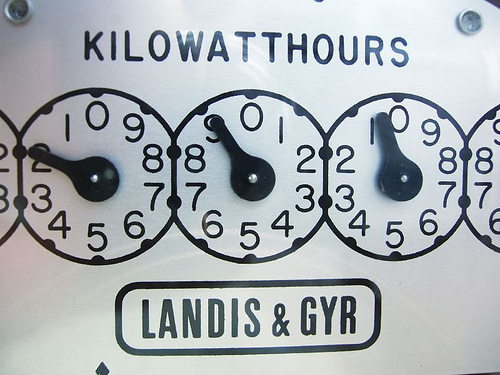 Hello solar drops and droplettes!  Electricity bills can seem quite cryptic to the uninitiated, so we are going to do our best to demystify the bills for our readers.  It is our hope that you will gain a better understanding of your electricity usage, utility rates and schedules, how you can reduce your personal usage and save money.  Once you understand how your electricity rates works, you’ll be able to determine whether or not replacing all or part of your electricity with solar makes sense in your specific situation.

We’ll focus on the basics of the bill page-by-page, focusing mainly on the first and third page because the other pages contain no usage data.  Future articles will address other aspects of electricity bills, some of which were outlined above and others that will be generated directly from questions you may have.  Please post any questions in the comments and I would be happy to answer them in a later article.  Now, grab a copy of your bill to follow along, and without further ado, let’s dive in!

*Please note that the example bill for this article is from Southern California Edison (SCE). Most bills have the similar information, but if there are some serious differences, feel free to ask about them.  I will address all questions in later articles or directly in the comments.*

Page one is your account summary. Most of the important numbers on the bill are on this first page.

The service account number is associated with specific addresses that are under the customer account. Underneath this number and associated address is the rotating outage number, which may be used to access information about scheduled blackouts for your outage group (this information is available online or by phone as well).

Just below the top portion of the bill is the invoice summary of the previous bill amount, your payments, the current balance and any new charges that have accrued in the current billing period, which is listed in the top left-hand corner.

Below the summary is the reading from your meter in kilowatt-hours (kWh). It provides a graph that shows your daily average electricity usage (kWh).  Use this tool to compare your daily usage as it varies month-to-month and season-to-season.

The bill also offers data on your average daily usage by the year, so if you have been making efforts to reduce your usage, those numbers will indicate your level of success in that endeavor.

The simple stub below the graph contains your customer account number, service address and any additional debiting information if you are signed up for automatic payments. Fill out the info on the back of this stub and mail it in if you need to update your contact information with you utility.

That wraps up the first page, but there is one concept that needs to be broken down before we move on. Since this is an article about the basics of understanding your electricity bill, it’s necessary to step back for a second to explain what kilowatt-hours (kWh) are and how they affect your bill.

Let’s keep it simple: say the only electricity you use is a 100-Watt (W) incandescent bulb.  You know, the kind that turns 98% of its electricity into heat and only 2% into light. If you keep that light on for one hour then you have used 100 Watt-hours (Wh).

One kWh can cost somewhere in the ballpark of $0.09-$0.50 per kWh, depending on what tier of electricity you are currently in at the time you are using that electricity, as well as what utility you’re signed up with (ex. PG&E has more expensive rates in the upper tiers than SCE). But now we’re getting ahead of ourselves! Let’s get on with the rest of the bill.

To avoid redundancy, this article won’t cover the second page in detail. Suffice it to say that the second page contains contact information for the utility and provides basic information about rotating outages, payment options, definitions and other information regarding your bill payments.

At the top of page three are the details of your new charges. These are the meat and potatoes of the bill. Just below the header is your rate (also called a rate schedule). There are many rate schedules for residential and commercial rates, the most common types being Domestic, D-CARE, Time of Use, and the Summer Discount Program. These and other rate schedules will be discussed in detail in a subsequent article. Once again the billing period is listed; on this page it’s below the rate schedule. Usually the billing period will be between 28 and 32 days.

The charges themselves are where many people get lost. That’s because there are two types of charges, delivery charges and generation charges. Let me explain: The electricity itself is fairly cheap to create. Consumers are charged slightly over $0.08 per kWh when the electricity is generated no matter how much is used. However, when it’s time for the electricity to be transmitted over the grid from the power plant to a residence or business, about half of the electricity is lost in the delivery, hence the delivery charges. The grid becomes even less efficient over time. It’s over 100 years old, and any repairs to the grid result in increasing prices for electricity.

Delivery charges are broken down into several smaller charges. The main numbers include a basic charge for service at slightly less than $0.03 per day, seasonally tiered delivery charges that start at $0.04 per kWh and increases over $0.25 per kWh in the fifth tier (the highest rates will vary by region and utility provider), as well as a DWR bond charge. The Department of Water Resources (DWR) charges a bond charge on the example bill to repay bonds issued by DWR to cover the cost of buying supplemental power for customers during the energy crisis (this will probably not appear on bills outside of California).

Other contributors to the cost of delivery are listed in the column to the right of the delivery and generation breakdowns that says your delivery charges include:.  These include transmission and distribution fees, nuclear decommissioning fees, a conservation incentive adjustment, public purpose programs charge, and new system generation charges.  You can do your own research to better understand these additional costs, but at a minimum it’s important to understand that they make up over 40% of most electricity bills and they will always be part of the delivery charge as long as the source of electricity is sited miles away from homes and businesses, requiring a grid for distribution which results in efficiency losses during transmission and distribution.

The generation charges are fairly simple compared to delivery. Our example bill includes a DWR energy credit per kWh, balancing out part of the bond charge under the delivery section. Below this credit are SCE’s seasonal charges, shown in respect to which tiers the customer is in at the end of the billing period.

Once again, additional generation charges are listed in a column on the right underneath the extra delivery charges. Our example shows only a competition transition charge.

Below this are your overall energy charges, which also boil down to a single item, franchise fees.  The fees and the competition transition charge are just a reflection of the cost of business for your utility.  By buying electricity from a utility, you are paying for all maintenance, repairs, special programs and incentives, not to mention salaries and pensions.  When any of those costs go up the utility just spreads the cost across it’s many thousands of clients, resulting in increased rates.

The additional information column lets you know what your service voltage, which is normally 240 volts for residences.  It also states the baseline allowances per season.

All of the aforementioned charges are subtotaled, then hit with a state tax of $0.00029 per kWh, which is added to give the total charge for that month’s usage. Below the total is an infographic designed to help customers keep track of their average cost per kilowatt-hour.

Think of each tier as a bucket of a certain size that gets filled up with electricity. Every time you reach the maximum amount of kWhs in one tier, you start filling up the next tier. The rate per kWh increases with every tier. Basically the more energy you use the more you pay.

Tier 1, or baseline electricity, is slightly cheaper during summer months than in the winter. The utility either increases the amount of kilowatt-hours available in the baseline or a portion of the baseline will cost slightly less per kWh than usual.  Keep in mind that the price per kWh in each tier is the sum of the generation cost (which is the same no matter how much you use) and the delivery charges (which increase in every tier). In SCE territory (at the time this article was written) this tier provides electricity at $0.13 per kWh under the Domestic rate schedule.

Tier 3 provides 70% of baseline, about 210 kWh for this bill (note that our example bill was charged right when baseline was transitioning from winter to summer rates) at $0.24 per kWh.

Tier 4 is the same size as baseline, however electricity in this tier costs over double the baseline price, in this case $0.28 per kWh.

Tier 5, which is the most expensive rate, reaches $0.31 per kWh for SCE or $0.40 and higher for some other utilities. Rates are not reset until the beginning of the next billing period, so heavy users may reach tier 5 in two or three weeks in which case they pay a premium for a huge bulk of their electricity. Tier 5 is infinite, so unlike the other tiers it won’t “fill up”, which at least means that the electricity won’t get any more expensive. For homes that reach tier 5 consistently, efforts should be made to conserve energy. Alternatively, it’s possible to generate a portion of energy production on-site through solar panels, windmills, geo-thermal or hydroelectric sources. Such alternatives are the equivalent of buying your own power plant in order to buy down the cost of electricity over time.

In the interest of time and space, pages four through eight won’t be detailed here. Usually they will contain information about programs, tips, and news specific to the utility.  If you have questions about your bill or would like to see something addressed in a following article, leave a comment and it will be answered.  Hopefully this helped a few of you out there understand the basics of your bills. Thanks for reading. Catch you next time!