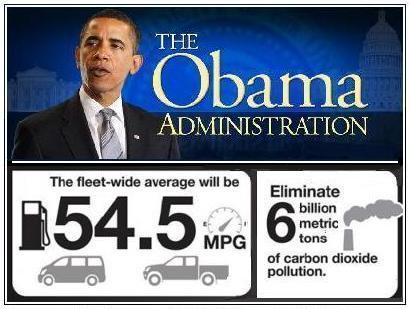 New vehicle standards have been issued by the U.S. Department of Transportation (DOT) and the US Environmental Protection Agency (EPA). The Obama Administration has finalized new standards of 54.5 mpg that will be implemented by 2025.These new vehicle standards in concert with previous Obama administration standards will almost double the fuel efficiency of future vehicles as compared to new vehicles currently on our roads today. The previous Obama administration standards for cars and light trucks for Model Years 2011-2016 raised average fuel efficiency to 35.5 mpg by 2016.

Described by President Obama as “the single most important step we’ve ever taken to reduce our dependence on foreign oil.” This new standard is not only good for the environment, it is good for national energy security, good for Americans looking to save on gas, good for automakers and good for everyone that breathes the air.

These moves will serve as a catalyst for new innovation and help increase the adoption of electric and hybrid vehicles in the US.

This will save consumers more than $1.7 trillion at the gas pump which is a savings amounting to $8,000 over the life of a model year 2025 vehicle.

The standard reduces US oil consumption by 12 billion barrels or 3.1 million barrels per day by 2030. It also reduces carbon pollution by almost 6 billion metric tons. The reduction of 570 million metric tons in 2030 is equivalent to taking 85 million of today’s cars off the road or shutting down 140 coal-fired power plants.

The new standard is also a winner for automakers as it increases their profits and creates jobs. It is anticipated to create 570,000 new jobs across the nation between 2017-2025.