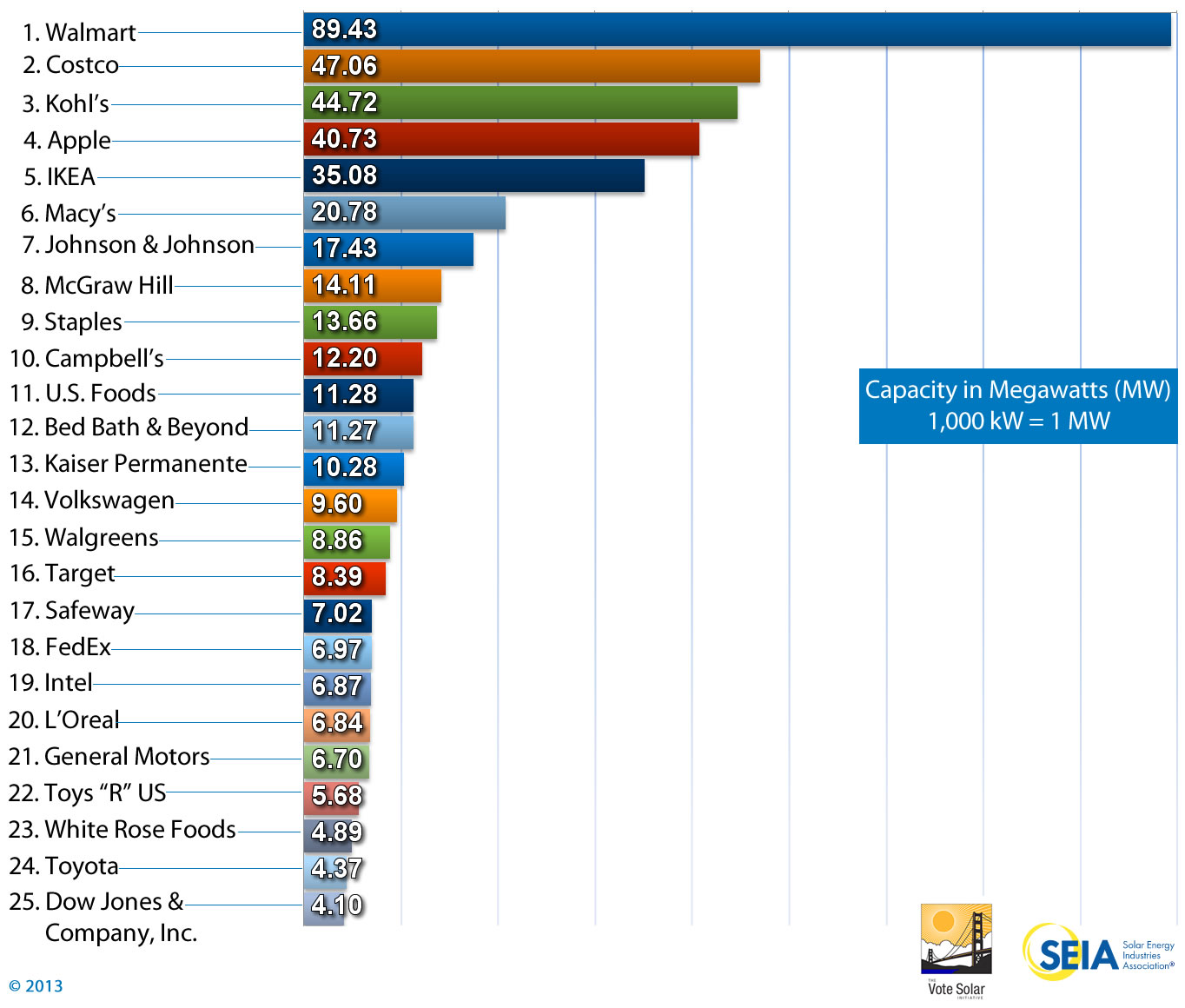 The new Solar Means Business report out today (Oct. 15) from the Solar Energy Industries Association (SEIA) and the Vote Solar Initiative found that among the top 25 corporate users of distributed solar energy use increased by 33 percent in just one year, with the top 25 users of local solar having more than 445 megawatts of solar in action, up from 300 megawatts in 2012.

“The top 25 corporate users named in the Solar Means Business report reads like a Who’s Who of the most successful corporations in America,” said SEIA Executive Director Rhone Resch. “These brands are leading the way in reducing our nation’s dependence on foreign energy sources.”

Second in terms of number of systems installed is Walgreens, which now has 156 solar arrays, the report found. However, Walgreens stores are usually much smaller than Walmart or Costco stores are. As such the company is fifteenth in terms of capacity with 8.86 megawatts of solar installed.

Overall the capacity and number of installations lists looked relatively similar to last year’s results with one notable exception, Apple. The company didn’t even place on last year’s list and this year, thanks to the 40.73 megawatts—most of which (if not all) is at its North Carolina datacenter—the company jumped to fourth on the list.

Resch observed that retailers installed the most solar capacity, but added that auto manufacturers, pharmaceutical companies and the food services industries are all looking to lower operating costs through solar power. “As of this past August, the total commercial solar deployment was 3,380 MWs at almost 33,000 facilities. This represents a 40 percent increase over last year alone.”

The businesses are going solar in an effort to reduce their energy costs. For instance Walmart’s Vice President of Energy Kim Saylors-Laster, said that the company’s solar arrays have already saved the company roughly $3 million in utility costs in the U.S.

The effects can also be larger than just at the businesses, however. “We think the consumer facing brands in the report can help to lead more consumers towards solar adoption as well,” said Jim Walker, co-founder of The Climate Group and Director of International Programs & Strategy. “This is part a wider trend we’re seeing, we’re seeing more companies like Ikea and Apple and others now setting pretty big, ambitious renewable energy targets.

“We’re working to build this group. This is a great resource, a great indicator [that] highlights the leadership of companies that are doing the work,” Walker said. His organization also is working with companies and looking at how to harness their work and social media to encourage more people to install residential solar, he said.