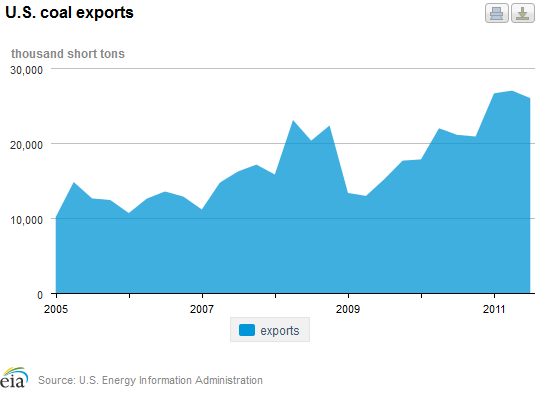 For the full year of 2011, the US exported 107,259 thousand short tons of coal. This was the highest level of coal exports since 1991. More impressive: exports recorded a more than 25% leap compared to the previous year, 2010. (see data here, opens to PDF).  Additionally, this was also a dramatic breakout in volume from the previous decade, which ranged from 40,000 – 80,000 thousand short tons per annum.  The below chart, from EIA Washington, does not capture the full year, though it certainly portrays the trend. Nota bene: this chart tracks the quarterly volumes of coal exports: In an early 2010 post, Can the US Significantly Increase its Export of Coal?, I wondered whether a weaker US economy, partially kicked off oil, would have to source more of its energy from coal—thus putting a cap on any increase in coal exports. Or, whether the same economy, transitioning in part to more natural-gas-fired power generation, would possibly find a way to free up more coal for export. We may now have our answer.