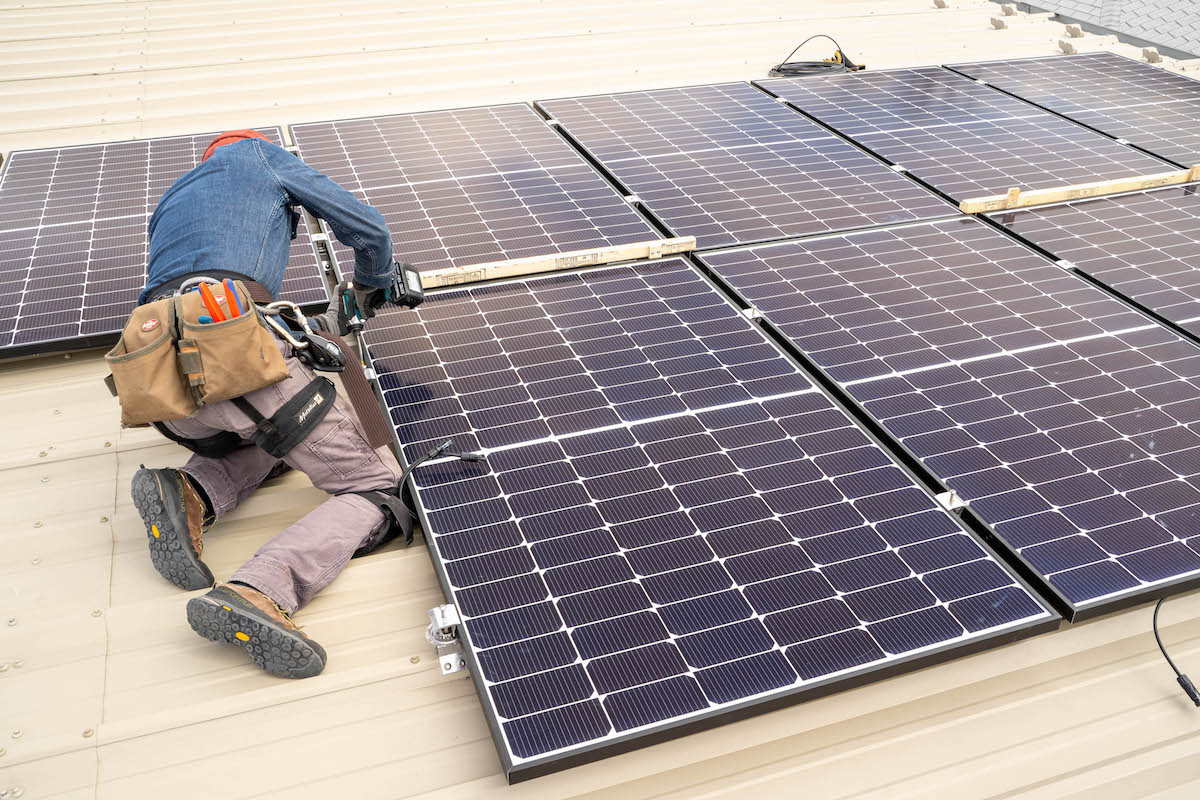 Most accomplished solar contractors are knowledgeable and experienced in solar photovoltaic (PV) design and installation from an electrical perspective, but few have in-depth knowledge of the various roofing systems out there, their benefits and drawbacks. Let’s talk about metal roofs today.

Metal roofing has some attributes that are often overlooked as compared to alternative roof types.

The metal roof provides an ideal platform for mounting rooftop solar for these primary three reasons:

When mounting solar PV to metal roofing, essential criteria such as the method/engineering of attachment should be considered to provide permanence for building owners and ease of installation for solar contractors.

Done the right way, the integrity of both the roof and solar PV system are preserved, and code compliance is maintained to achieve the

When mounting PV on metal roofs, it is important to ensure that continued roof durability and warranties are not jeopardized. Metal roofs maintain their value and longevity for decades, but only if their design integrity is carefully preserved.

General speaking, mounting rooftop PV should always be consistent with the design principles of the host roof, which vary according to the specific metal roof type.

Further, a PV array on a rooftop is exposed to the environmental forces of wind, snow, rain, hail and even earthquakes. These forces can be complex, making secure attachments of PV crucial. PV arrays improperly designed and installed can become airborne during a wind event and pose a serious threat of personal injury or property damage.

Therefore, skilled design, engineering and production of these components are required. A working knowledge of metallurgy, sealant chemistries, metal roof types and other variables are also critical to a long-lasting solar/metal roof combined asset.

Both methods result in different energy outputs from a given module or number of modules. These options may have differing roof inter-row spacing, structural engineering factors and cost implications, so initial cost and ROI should be analyzed individually when considering and comparing the two options.

When PV modules were at their highest cost per watt and lowest efficiencies, tilted systems were the norm to achieve optimal sun angle and were also demonstrably financially prudent. Solar array design was driven primarily by the high cost of the PV module, hence achieving optimal sun angle using tilted mounting systems was worth the added costs.

The next consideration concerns further detail of the actual flush-mounting method.

As demonstrated in Figure 1, a typical rail-mounted system utilizes aluminum or light-gauge coated steel rails mounted above the seams or ribs of a metal roof.

This method normally orients the rails traversing the seams or ribs of the south-facing metal roof.  Most module producers specify the “grabs” (hold-down clamps) for the module engage the module along the long dimension, resulting in modules with “portrait” orientation to the roof slope. In high wind areas, additional rails are sometimes necessary to provide another module attachment point (Figure 2). Continuous rail allows neighboring modules to be within an inch or less of each other, which may maximize power density.

The offset above the base roof surface (usually 7” to 9”) allows easy access during installation and extra space for microinverters, optimizers and rapid shut-down equipment.

In climates prone to snow accumulation, the forces acting on the surface of the module create an eccentric loading (or moment arm) at the rails’ attachment points, increasing the forces applied to the attachment components. This effect is increased by the offset dimension (height off the roof), snow load and roof slope. These variables must be considered in the design of the system. The disadvantages of this configuration include structural design complications, the resulting additional material and labor costs (over rail-less mounting), higher collateral loads and the (perceived or real) negative aesthetics of a system raised above the roof.

Another version of a flush-rail PV mounting system is a flush “short-rail” (aka mini-rail or micro-rail), where short sections of rail are mounted on metal roof ribs at locations, as needed, to mount solar modules in portrait or landscape.

These short-rails are installed parallel or perpendicular to ribs, depending on module orientation and are sheet-only attachments when used on face-fastened roofs. While a short rail may save material costs and lower collateral loads when compared to continuous rails, the method of attachment should be carefully scrutinized.

Many products simply use one or two sheet metal screws in the top of the roof panels’ ribs. This method puts the fastening in direct withdrawal and yields very low pull-out values in light-gauge sheet metal.  In contrast, fastening to the side of the rib wall puts the fastening in shear rather than direct withdrawal and is generally preferred (Figure 4). Installation is somewhat labor-intensive, mostly due to the number of pieces that must be individually located.

Solar modules may also mount directly to the seams of a standing seam metal roof or to the ribs of a face-fastened metal roof, eliminating the rail and related components entirely. Instead, the seams or ribs inherent to the metal roof serve as the mounting rails. The modules are now installed in landscape orientation (Figure 3), still enabling recommended anchorage at the long side.

This method is similar to the flush-rail mounted system; however lower in profile (usually 4”- 5¾” above the plane of the roof). This mounting method can provide a more uniform load distribution to the roof and/or roof structure with as little as 15% of the weight (collateral load) of rails. Cost savings can be dramatic, especially in regions experiencing high-wind exposure as the third rail is also obviated.

Another advantage of this method is that the roof is replete with ribs or seams, so there is increased module placement flexibility. The downside, when compared with flush-rail mounting, is that module layout may be marginally less space-efficient. Space loss of 2%-5% compared to flush-rail mounting is not unusual. Any loss of power and energy density should be balanced against the rail material and labor cost savings in the financial analysis.

With increasing popularity, the metal roof is the ideal host for mounting solar PV due to its extended service life. Alternative roofing types will expire long before the life of the PV system, leading to costly disassembly of the PV array, re-roofing and re-assembly.

Solar contractors should know about roofing alternatives and their service lives to bring added value to their customers. When it comes to attaching solar modules to metal rooftops, using conventional rails has been the traditional method. Yet, familiar concepts don’t necessarily deliver the best outcomes; the advantages of rail-less solar module mounting solutions(for example, S-5! Solar Mounting) are increasingly well known.

Because of significant cost savings, time savings, ease of installation and flexibility of module layouts, simplified and low-cost logistics and a greater return on investment, rail-less is gaining traction—fast. As more installers and contractors experience these benefits firsthand, these innovations will continue to be a go-to solution for metal rooftop solar mounting.

For information, videos and webinars on this topic, please visit www.s-5.com to learn more about the key factors to consider when mounting solar on your metal roof or check out the Metal Construction Association for a variety of white papers.

He began ground-breaking innovation of penetration-free ancillary attachment solutions in 1991 and holds 60+ U.S. and foreign patents. Together with his son, Dustin, they co-invented, a rail-less direct-attach solar solution that provides a simple, secure method to “lay & play” PV modules with tested, engineered, cost-saving, attachment to the only roof type that outlasts the solar—the metal roof.