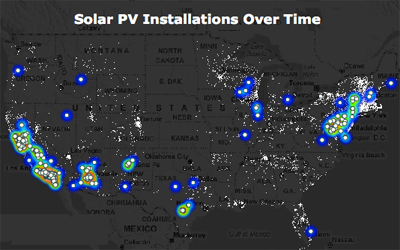 With a solar system installed every four minutes in the U.S., keeping track of the bright spots on solar’s local landscape can be a tough job.

We wanted to know the answer to a simple (or simple-seeming) question: What are the hottest cities for solar in the U.S.? The first thing we found is that we were asking the wrong question — rather than individual cities, the metric we found is the installed solar capacity per capita of metropolitan areas (using cities as a unit is considered to be problematic, since large installations located near individual cities can skew the data). We were also curious know what common factors contributed to solar’s success, and what were the individual standout factors contributing to just one metro area alone?

Thankfully, the National Renewable Energy Laboratory, the federal government’s innovation center for renewable energy research, keeps a tally of just the data we were looking for. It’s accessible to the public on its Open PV Database.

So who’s winning the solar horse race? The table below spells it out. (Note: for clarity’s sake, we truncated the names of the Metropolitan Statistical Areas in the list below; we hope you get the gist of where we’re talking about…)

Ken Johnson, a spokesperson for the Solar Energy Industries Association in Washington, D.C., noted that the estimates should be considered minimums for each metro area, since the NREL database only captures about two-thirds of the total installations.

Fresno, Calif.: the solar capital of the U.S.?

Johnson set the record straight. The more than twofold difference between No. 1 Fresno and No. 2 Phoenix, he said, had to do more with the peculiarities of the data, the size of the projects, and the Fresno area’s small population.

Since the area has more open space suitable for large-scale projects compared to others on the list, he said, many major solar projects (greater than 1 MW) have been installed in the Fresno metro area.

“When this is combined with Fresno’s relatively small population (just over a million in the metro area — roughly a quarter of the size of the Phoenix metro area), strong solar resources, proximity to thriving and mature solar economies (in San Francisco and Los Angeles), and strong state policy, it stands to reason that Fresno would be near the top of this list,” Johnson said.

Standout factors among the rest of the top 5

“San Francisco’s presence is driven primarily by its role as the headquarters for many of the country’s top players in the solar market,” he said. “Similarly, Phoenix plays a large role in the solar industry and sees much in the way of competition among companies.”

Though NREL’s installed capacity data does not distinguish between residential and non-residential installations, Johnson said that leaders for distributed generation solar are similar to the overall rankings.

With California as the runaway leader, the New York, Boston and Philadelphia metro areas are also leaders in installed distributed generation capacity — though “perhaps not in distributed generation capacity per capita,” Johnson said. “These areas have high electricity prices, fairly established markets (at least in New Jersey) and strong commitments to solar growth by state governments in Massachusetts, New York, and occasionally, New Jersey.”

Boston (currently ranked as the no. 8 by installed capacity per capita among major metropolitan areas) will grow, as a result of strong policy support in Massachusetts and the amount of companies moving into the area, Johnson predicted.

“The Washington, D.C., area might be a place to watch as well — especially if proposed policy changes in Virginia come to fruition,” Johnson said.

By Kristine Wong, originally published on our sister site,SolarEnergy.net.

Original Article on One Block Off the Grid