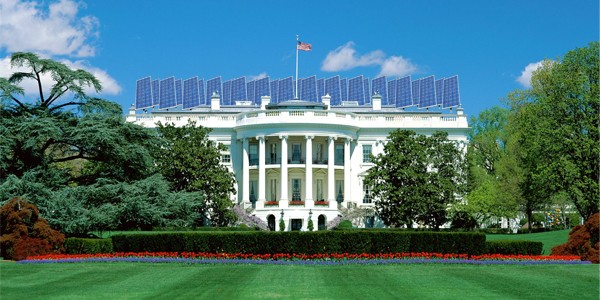 During the oil crisis of the late 1970’s, Jimmy Carter installed 32 solar thermal panels on the White House to set an example for Americans. At the dedication ceremony, Carter stated, “In the year 2000 this solar water heater behind me, which is being dedicated today, will still be here supplying cheap, efficient energy…. A generation from now, this solar heater can either be a curiosity, a museum piece, an example of a road not taken or it can be just a small part of one of the greatest and most exciting adventures ever undertaken by the American people.”

A few years later, Ronald Reagan took the panels down almost as soon as he took office. The panels languished in a warehouse for many years collecting dust and not seeing the light of the sun. Many years later, half were moved to Unity College in Maine where they produced hot water until 2005. Now, you can find some of the panels in museums around the world.  Just as Carter predicted, the solar panels did supply cheap efficient energy for years AND they ended up in a museum as a historical relic.

Sadly, no President brought solar back to the White House until now. President Obama just reinstalled solar panels on the White House as both a practical and symbolic gesture to tout his climate action plan and the promise of solar in America for creating renewable energy and jobs. “The President is basically doing what Americans all across the nation are doing right now, they are making a conscious choice to look for renewable energy, like solar, as the cheaper, cleaner, and preferred energy source for their homes and families,” said Minh Le, the Director of Solar Technology in the Department of Energy.

Dr. Ernest Moniz, the U.S. Secretary of Energy said, “Solar panels on the White House, I think, are a really important message that solar is here, we are doing it, and we can do a lot more. I am very bullish on the future of solar energy as a key part of our clean energy future.”

The solar panels on the White House roof are just the beginning of an ambitious plan to quickly increase solar energy adoption in the U.S.  The President recently released anumber of initiatives to increase solar, increase jobs, and increase the quick adoption of solar across the country.These initiatives include:

Additionally, the President has secured commitments from over 300 companies, builders, and other groups to increase the amount of solar they install. From Yahoo to Ikea to Wal-Mart, companies and multifamily and affordable housing managers will be installing solar on their buildings across the nation. The Home Depot will create residential solar learning centers at over 1,000 stores and Google announced a $1 million prize to create the next generation of power inverters.

These initiatives will build off previous ones that have been successful; solar has been expanding rapidly in the U.S. Every four minutes a homeowner or business in the United States is installing solar, and last year over 23,000 new jobs in solar energy were created. This is an increase of 20% in solar jobs, and as the White House stated on their blog, these are jobs that can’t be outsourced. At the same time, solar accounted for over ¼ of all new power generation capacity in the country.

The solar panels on the White House are an amazing symbolic step for solar, but the President’s impressive initiative will drive solar to new heights that we haven’t seen before. Like Dr. Moniz said, we should all be bullish on the future of solar in America.

Dara Olmsted Silverstein runs Stanford Residential & Dining Enterprises’ Sustainable Food Program. Prior to that, she worked at the Harvard Office for Sustainability, focusing on renewable energy for one year and behavior change for the other seven. When in Boston, she wrote for the Boston Globe’s Green Blog, but since moving to California, she has parlayed her energy into volunteering as an editor for Kiva and writing for Mosaic. Dara has a BA from Harvard and an MA from Tufts. Follow her on Twitter @dolmsted.