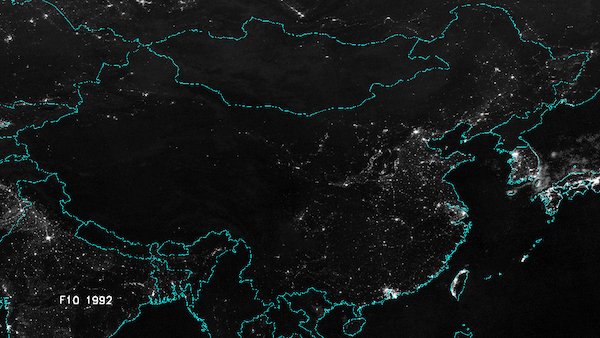 As people are coming to understand, Asian economic growth over the past two decades—despite its great adoption of oil—essentially runs on electricity, most of which is supplied by the burning of coal. Here is the night sky over Asia twenty years ago, as captured in a still photograph from a film loop provided by NOAA’s national geophysical data center. (see: NOAA -Nightime Lights of China 1992-2010): Recently, in the past three months, a consensus has begun to form that China’s use of coal may have just slipped past the fattest part of its growth curve. That may be true. But as you can seen on the 2010 photograph below, China is not the only “country” in Asia that has seen its demand for electricity advance strongly, since 1992: It’s understandable for people to be encouraged by recent trends in global coal consumption, mostly in the United States. If China’s rate of coal consumption growth is also about to slow, that too is encouraging. The problem however, is that China would be slowing its rate of growth from a very, very high level of absolute demand. Further, as you gaze across other regions of southeast Asia in the above photos, global coal consumption is less about “country” and more about population. 1.2 billion people in the world are still unserved by electricity. A good portion of them live in India, for example, where you will notice the “advance of nighttime” lights has also been quite strong.

While there is certainly a possibility that Non-OECD countries will adopt more wind and solar—owing to the relative simplicity of those technologies—we need to be sober about current trends. The great trajectory of coal underway the past decade has a number of competitive advantages, especially the phenomenon known as path dependency. This is why I say the great news for clean energy, on a global scale, does eventually arrive. But, not until later in the century. Before then, the world unfortunately is transitioning even harder to fossil fuel energy, of the dirtiest kind.