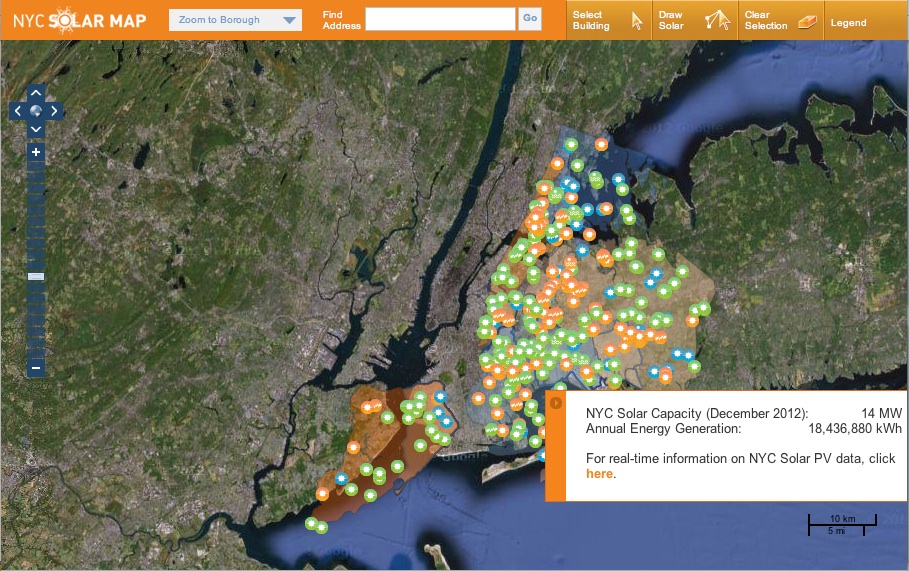 Things move fast in the city that never sleeps and solar’s been keeping pace. By the end of 2012, the amount of rooftop solar photovoltaic installations in New York City had boomed to 14 megawatts from 5.5 megawatts at the end of 2011—an increase of 8.5 megawatts in a year. That’s according to recent data from the City College of New York (CUNY) data, which shows that New York City’s aggressive program to get more solar and renewable energy in the city, as part of Mayor Michael Bloomberg’s initiative to reduce the city’s carbon by 30 percent by 2030, is working.

CUNY’s Sustainable CUNY is helping lead the effort to get more solar and other renewable energy online in the Big Apple. It partnered with the Mayor’s Office of Long Term Planning and Sustainability, NYC Economic Development Corporation, New York State Energy Research and Development Authority (NYSERDA) and Con Edison in 2007, in an effort to make the city more sustainable. At that point, the city only had about 1 megawatt of rooftop solar installations, and a handful of installers. Now the city has more than 90 installers in the city, according to Sustainable CUNY.

The cumulative 14 megawatts of installations, which are viewable via CUNY’s NYC Solar Map, have added roughly $116 million to the city’s economy and the opportunities for lower-cost installations keep coming up, spurred by the development of the industry. “The supply chain of services that provide support to the solar industry includes engineers, architects, and electricians,” said Sustainable CUNY. “The improvements and growth in the NYC market have also attracted companies that offer solar leasing and third party purchasing agreements, providing opportunities for New Yorkers to install solar for relatively small upfront costs.”

Since the original partnership, Sustainable CUNY and its partners have introduced new rebate and incentive programs, and the map (which allows users to check out other installations throughout the city, as well as determine how much electricity a building or address could produce. Since launching the partnership, NYSERDA launched a ‘Standard Offer’ and the NY-Sun Competitive PV Program for large scale installations, New York City has offered the NYC Property Tax Abatement for solar, the state has introduced Solar Empowerment Zones, and the city and states are working to make it easier to go solar by changing technical, permitting improving net-metering requirements.

The collaborative effeorts have thus far been successful. CUNY said in April 2012 that the city surpassed its Solar America City goals three years earlier than anticipated and it anticipates that the amount of solar will continue to grow.