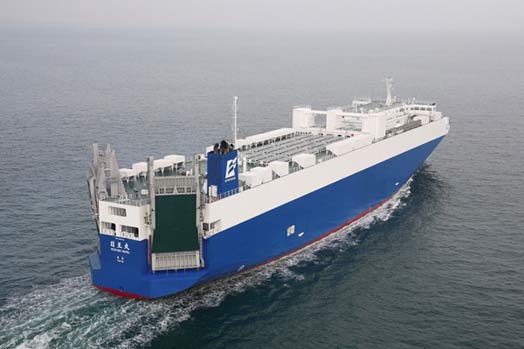 Nissan has married solar-power to auto shipping. It recently began using the “Nichiomaru”, a cargo ship outfitted with more than 200 solar panels and a hybrid diesel engine, to transport autos up and down the coast of Japan.

Nissan claims the Nichiomaru will use 1,400 fewer tons of fuel and produce 4,200 few tons of carbon dioxide as a result of the solar + hybrid diesel combination.

The solar-diesel hybrid ship is part of Nissan’s environmental action plan, which it calls the “Nissan Green Program 2016.” Nissan is aiming to reduce carbon dioxide emissions not only coming out of the tailpipe of the car, but also in production, distribution, and sales.

No word that we can find anywhere online about whether the cargo ship will carry Nissan LEAFs or not, though it would be great if it did.

Now, Nissan, how about using similar solar-hybrid diesel ships to get all-electric LEAFs to the U.S., Europe and the rest of the world, where, ideally, they’ll run more and more on electricity generated by renewable energy sources such as wind and solar?