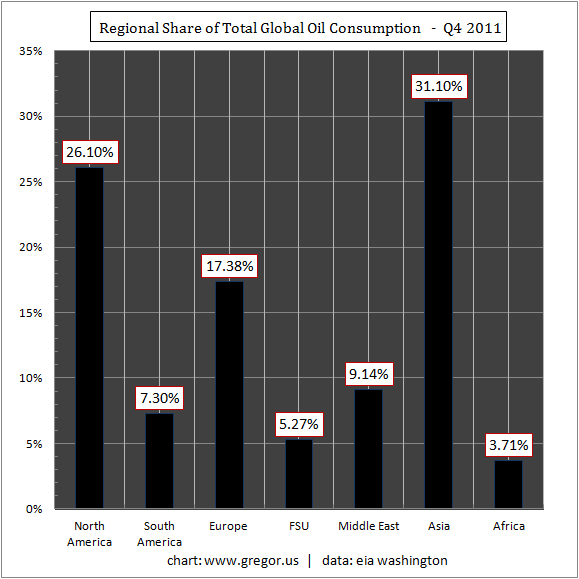 Over the past decade, Asia’s transition to the leadership position in global oil consumption is well known. Starting in 2002, OECD countries slowed their consumption growth for oil and subsequent to 2005 actually saw their consumption decline. This process freed up limited oil supplies to Asia, which now accounts for 31% of total global oil use, as of the latest data. | see:  Regional Share of Total Global Oil Consumption (as of Q4 2011). Less discussed is the emergence of new oil demand from the Middle East and especially Africa. While oil demand from younger populations in the Middle East is subsidized, and offers the prospect that future subsidy removals could slow demand, Africa’s capability to hit the world with new demand looks particularly intriguing. With roughly 1 billion people on the continent, the trajectory of future African demand could follow the same path of other emerging Asia with a ferocious insensitivity to price rises as new users come onstream, consuming only a little oil individually. Moreover, as you can see in the chart, African demand accounts for less than 4% of world demand, even though it contains over 14% of world population. In other words, in a world of flat supply, in which crude oil production has been trapped below 74 mbpd of production since 2005, Africa could easily add 2-3 mbpd of new demand over the next several years. If not more.

A small amount of petrol is a life-changer to a new user, adopting short-trip motorized transport for the first time. There are myriad reasons to watch Africa, and many who are involved in everything from agricultural development to mobile communications already do. But Africa as an emerging source of oil demand, the kind that could rapidly escalate and catch the world by surprise, is another reason to study this emerging continent closely.