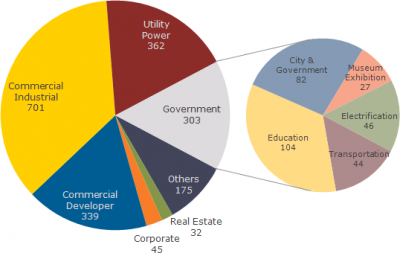 China’s solar market is undergoing a change that sees much more photovoltaics being installed for on-site generation purposes. The growth in the segment, now the largest segment of China’s photovoltaics market, comes as the number of the country’s overall solar installations are increasing sharply, perhaps slightly reducing pressure for lower prices for PV internationally.

The number of non-residential building-mounted PV applications in China soared to more than 700, according to NDP Solarbuzz’ latest “China Deal Tracker” report. However, the largest overall increase was the 58 percent increase in ground-mount applications. The tracker looked at more than 1,000 applications for solar projects larger than 50 kilowatts in China. Among other things, it found that China’s corporate PV market will outpace its utility PV market in 2013. “The growth of commercial installation is driven by A: Upstream manufacturers moving into downstream project development, and B: The trend of growing demand for distributed PV systems,” said Solarbuzz Analyst Ryan Lian.

In all Lian anticipated the Chinese market will see 4 gigwatts to 5 gigawatts of new installations in 2012. He anticipated that some of the local demand will help reduce the pressure to lower pressure on PV manufacturers internationally. “Strong domestic demand will certainly help to digest capacities in China, but exports will continue to be very important,” he said.

The growth of the non-residential market in China may also offer a greater opportunity for other photovoltaic companies and suppliers to gain a foothold in the market. Solarbuzz said that dominance of the utility segment in the Chinese PV market made it hard for overseas PV companies to compete with China’s domestic PV manufacturers and systems providers. The growing share of commercial offer new opportunities for module, inverter, and other balance-of-systems component suppliers, the company said.