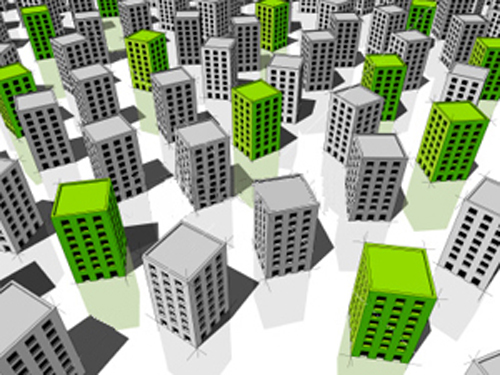 In spite of tight credit for buyers, record foreclosures and falling values, a real estate home is still a dream for most of the Americans. Many aspire for the dream home. According to several recent studies it has been seen that the real estate and the green building is set to experience boom in the coming five years and beyond. By a study it is seen 72% of the owners see their house being made in the near future. But unlike the earlier years when the dream was just a huge mansion, the current dreams are that of a green, energy efficient house made of sustainable material. And in some cases, a renovated house with eco friendly home products and energy efficient appliances are the requirements. There is an increased consensus and the concept of dream home has evolved in the past five years.

Many environment conscious home owners seek to purchase energy efficient appliances and lower the carbon footprint. They also add in solar panels to offset the energy costs. For 50% green equipments are all time favourites according to Home Horizons 2012 study. Also 27% state that energy efficient house is the reason that they wish to buy a new house. Now people pursue small, environment friendly and energy efficient homes.

Though the green homes are preferred and produce smaller carbon impact, they have acquired the reputation of being expensive. However, there is a class of people who are willing to pay a little extra for green real estates. Later these places convert into higher sales prices depending on the local market. There are also some green certified real estate agents or realtors who help in locating for energy efficient green homes. Hence the green estate is up for grabs.

Also in the commercial sector adoption of green building materials, high vacancy rate and government incentives are motivating a strong growth in the country with reference to building value and efficiency.

In 2009, USGBC (the United States Green Building Council) had undertaken a study which had projected the green construction to contribute around $554 billion to the economy. It was also seen in that study, that green buildings are helping saving the owners money. The estimation study between the years, 2000 to 2008 showed that green construction and renovation helped in $1.3 billion energy savings. Forecasts suggest the savings to rise to $6 billion between 2009 and 2013.

Commercial space owners adopt green retro fits because the high performance green building space experiences lower vacancy rate and higher premium as compared to the traditional spaces. This has been confirmed by the report on Energy Efficiency Retrofits for Commercial and Public Buildings. This market driver has proved to be steady till commercial buildings have been retro fitted, unlike other government policies which come and go often and on. In terms of green real estate investment it implies greater opportunities.

Not only in terms of energy savings green real estate have benefits otherwise also and thus is up for grabs. Tenants staying in such green buildings have been seen to be more productive compared to counterparts staying in traditional places. They also experienced lesser sick days. According to study, green real estate spaces were given higher rental, as high as 13 percent more than regular and lower vacancy rates, i.e. around 4% less than average. Green real estates’ are beneficial for owners as well as tenants seeking for lower costs and higher productivity.

Rob Watson is the pioneer of green building and architect Anne Johnson stated that green buildings are the thing of tomorrow and in the near future, LEED certification cycle; existing buildings will overtake new construction when investors and owners realize the advantages of green spaces.

The corporate America has already taken steps towards the green real estate. Goldman Sachs, IBM Corp, JP Morgan Chase and Toyota Motor have made the move to green buildings. The corporate world is really caring. Many construction companies have also taken up building and renovating buildings according to the green standards. According to Tata McGraw Hill report, such places bring around 3% higher rents and 7.5% increase in the building’s value. The fastest growing area in the already growing commercial building industry is the use of sustainable construction. Around 5% new US commercial construction received the U.S. Green Building Council’s Leadership in Energy and Environmental Design (LEED) certification in the past few years. The increase in energy efficient appliances, green standards makes the country move in an environment friendly direction.

To take advantageous decisions, strategic policies should be formed. Though, the green trend is in its infancy stage but that is bound to change in the near future. This green real estate boom is really up for seizing.

The post is written by Jason Phillips. He is a freelance writer and guest blogger. He is a Philadelphia resident with a passion for good food, good music and filtered water. His writes on topics varies from technology, beauty, green and smsf property investment. Photo by Diana Parkhouse