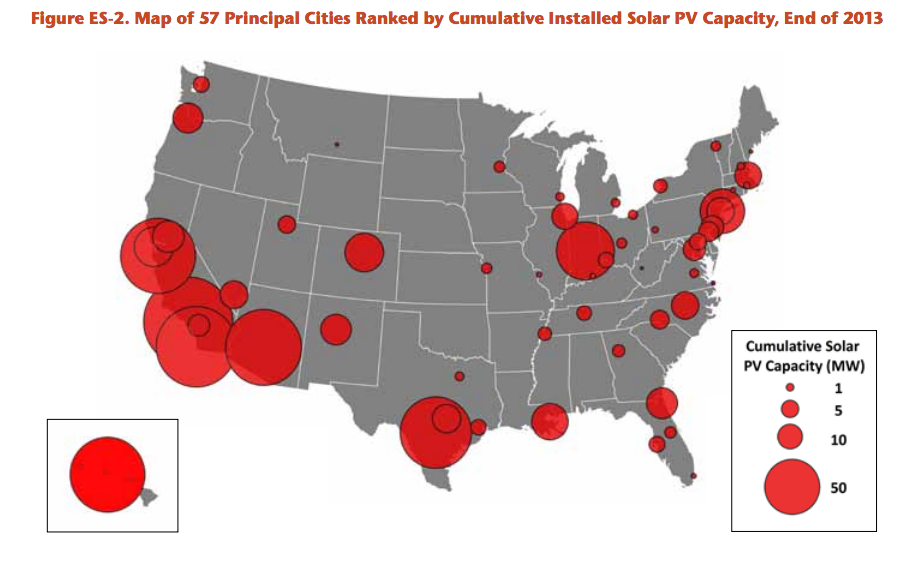 Who’s the most solar of them all? When it comes to U.S. cities, more than one can lay claim to the title, depending on how you slice it. Yesterday’s release of a report on solar cities had several municipalities proudly proclaiming their solar contributions.

The truth is, the more solar we install in our cities, the more we all win. But if a little healthy competition spurs more solar development, then we’re all for it.

The Environment Massachusetts report Shining Cities: At the Forefront of America’s Solar Energy Revolution, ranked 57 U.S. cities based on both installed capacity and per capita solar.

The findings? The top 5 cities by total installed capacity are Los Angeles, San Diego, Phoenix, San Jose, and Honolulu. Sure, those are all in sunny areas. Yet the fact that cities like Indianapolis, Portland, and Boston show up in the top 20 once again shows that policy can trump sunshine as a solar resource.

That’s also evident in the report’s look at some smaller cities that have “taken noteworthy steps to promote the growth of solar power” by adopting favorable policies. This is an especially inspiring section of the report, because it shows just how much can be done at the local level when cities decide to take action.

Other inspiring facts: There’s over 200 times as much solar PV capacity installed in the U.S. today than in 2002, and much of that has been installed in cities. The top 20 cities account for 7% of the country’s installed PV solar, though they represent only 0.1% of the land area.

For those promoting local power generation over remote solar farms, this is good news. With so many pluses to local generation and ownership — like local jobs and other economic benefits, plus minimizing the need for new transmission lines — it’s refreshing to see so much solar being sited in urban areas.

What helps promote solar in cities? The report found that these factors are crucial:

Rosana Francescato is the Communications Director for Sunible.com, an online portal that’s radically simplify the home solar buying experience. She also combines her passions for solar power and community as a community solar advocate. Rosana is on the board of Women and Cleantech and Sustainability and the steering committee of the Local Clean Energy Alliance. She has hands-on experience installing solar with GRID Alternatives, where she’s been the top individual fundraiser four years in a row. She’s excited about new ways for the 75% to participate in solar and has invested in several Mosaic projects. Follow Rosana @SolarRosana.