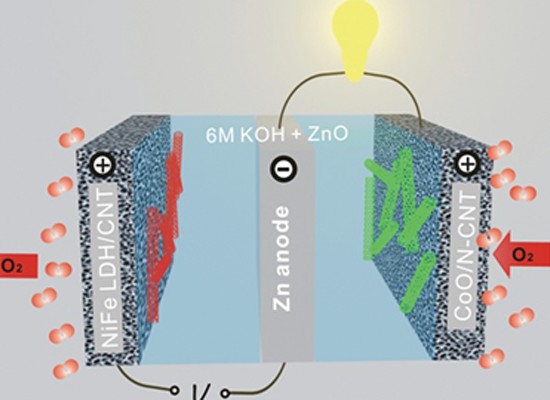 A new zinc-air battery developed by the Stanford scientists could prove to be a low-cost to lithium-ion technology. This battery has higher catalytic activity and durability than similar batteries made with platinum and other costly catalysts. The results of the study were published in the journal Nature Communications.

“There have been increasing demands for high-performance, inexpensive and safe batteries for portable electronics, electric vehicles and other energy storage applications,” said Hongjie Dai, a professor of chemistry at Stanford and the lead author of the study. “Metal-air batteries offer a possible low-cost solution.”

According to Dai, lithium-ion batteries have attracted the most attention, despite their limited energy density (energy stored per unit volume), high cost and safety problems. “With ample supply of oxygen from the atmosphere, metal-air batteries have drastically higher theoretical energy density than either traditional aqueous batteries or lithium-ion batteries,” he said. “Among them, zinc-air is technically and economically the most viable option.”

“Zinc-air batteries are attractive because of the abundance and low cost of zinc metal, as well as the non-flammable nature of the aqueous electrolytes, which make the batteries inherently safe to operate,” Dai said.

“Primary (non-rechargeable) zinc-air batteries have been commercialized for medical and telecommunication applications with limited power density. However, it remains a grand challenge to develop electrically rechargeable batteries, with the stumbling blocks being the lack of efficient and robust air catalysts, as well as the limited cycle life of the zinc electrodes.”

High-performance electrodes are necessary to catalyze the oxygen-reducing reaction during discharge and oxygen production during recharge, he said. In zinc-air batteries, both reactions are sluggish. In recent years, Dai’s group has used nanotechnology to develop novel electrocatalysts with higher catalytic activity and greater durability than conventional electrodes made with platinum, iridium and other precious metals.

For the Nature Communications study, the research team created electrode catalysts made of cobalt oxide, a nickel-iron compound and carbon nanomaterials. “We found that these catalysts greatly boosted battery performance,” Dai said. “We achieved record high-energy efficiency for a zinc-air battery, with a high specific energy density more than twice that of lithium-ion technology.”

The novel battery also demonstrated good reversibility and stability during long charge and discharge cycles over several weeks. “This work could be an important step toward developing practical, rechargeable zinc-air batteries,” Dai said.