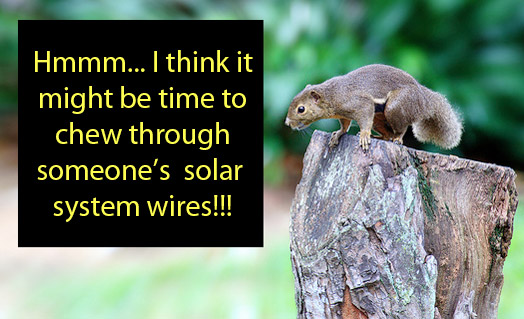 So, what do a home solar system, squirrel/critter guard (more commonly known as chicken wire) and way too much yard work have to do with one another?

Table of Contents hide
I. Neighbors have squirrel guard
II. Do only leased solar systems get a squirrel guard?
III. Keeping ‘Mr. Teeth’ at bay
IV. What do you think?
IV.I. Share:
IV.II. Related

In my case, quite a lot, unfortunately.

Three years ago, when REC Solar installed our 5.59 kW home solar system (which has been working great, having pumped out about 25,000 kWh of electricity), I had no idea that squirrels represent a threat to a PV system (think gnaw, gnaw, gnaw on your panel wires), or that squirrel guard was an option to prevent squirrel disaster.

No one at REC Solar talked to me about squirrels and squirrel/critter guard. Our squirrel-guard-less home solar system — with perfect, and, unfortunately, easily accessible nesting/wire chewing space underneath. [Photo By Christof Demont-Heinrich]

Then, a year after our system went up, our neighbors had a comparable solar PV system installed on their roof. They did a Sungevitiy lease.

Sungevity must insist on protecting its investment as much as possible, because the solar installer (Namaste Solar) who put in our neighbors’ system placed squirrel guard around the entire thing.

As soon as I saw the squirrel guard, I became paranoid about our un-protected system, and, to be honest, felt a bit gipped that REC Solar hadn’t done squirrel guard for us. Our neighbors’ solar system with squirrel guard around the edges. [Photo By Christof Demont-Heinrich]

Do only leased solar systems get a squirrel guard?

This feeling become more acute when I saw an REC Solar system go up in July of 2012 in Denver in which REC did in fact add the squirrel protection. Of course, that was a leased system, not a system owned by a homeowner (I know, because I talked to the REC Solar workers installing that system in Denver). This makes me wonder if only those who lease their home solar (we bought our system) get automatic squirrel guard protection — but that’s a slightly different topic.

Back to the topic at hand: ‘Sammy’ Squirrel — my daughters call all squirrels ‘Sammy’ for some reason ;-)

Have we had any squirrel problems?

Not yet. I happen to think a big reason for that is that we’ve never have any squirrels on our roof. And I think this is largely due to me cutting back the tree pathways that could lead ‘Sammy Squirrel’ directly onto our roof (sure, Sammy could climb directly up our house, but he’s unlikely to do so because it would be too much effort).

Of course, this means I’ve performed a considerable amount of hard labor (even a bit of dangerous labor – I’m climbing trees in some cases) to trim the trees back around our house in a serious way, such that, hopefully, it would take a flying squirrel, not a regular squirrel, to be able to reach our roof.

Of course, I would have preferred to have a squirrel guard installed around our home solar system to begin with, as this would have saved me a huge amount of tree trimming over the past few years (to be fair, I would have had to do a little trimming simply to keep branches from growing through our window screens).

Am I too paranoid about those ugly rodents with the giant teeth and bushy tails? (Sorry, I’m not a big fan of squirrels.)

I’m not sure, though I do know one of the bushy-tailed critters gnawed his way through the wiring on my outdoor weather station (located on a backyard fence), which no longer records wind speed as a result of Mr. Teeth’s ridiculous “work” (I have no idea what motivated the squirrel to gnaw the wiring).

It could be even if squirrels had easy access to our roof, they might not chew into our solar PV wiring.

Then again, it could be that they would destroy it – reading blog entries like ‘Solar owners fear squirrel apocalypse’ certainly doesn’t help me in terms of my squirrel paranoia.

In the end, I’ll be damned if I’m going to take any chances. So I’ll be out there, year after year, sawing down large tree branches around our house. On the other hand, I’m so sick and tired of having to attack our backyard trees again, and again, and again.

You can learn more about tree trimming at treeserviceremoval.com

What do you think?

Is my hard work in making it as difficult for squirrels to jump from trees in our yard directly onto our rooftop actually a big reason that, knock on wood, we haven’t had a squirrel chew into our home solar system yet?

That’s me in the middle of a 10-hour job sawing back branches near our house. I’m sawing them in order to eliminate any possible tree pathways onto our roof and protect our squirrel-guard-less home solar system. I wish REC Solar had told me about squirrels and installed a critter guard around our 5.59 kW system when they put it up in June 2010. That would’ve saved me 30 to 40 hours of tree sawing/pruning/disposal work over the past couple of years. [Photo By Christine Demont-Heinrich]