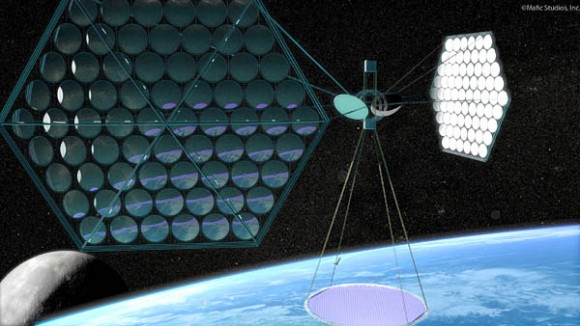 A couple common criticisms of solar power here on our beautiful planet are that it becomes useless at night and not all places receive high amounts of solar insolation.  That is to say that the Mojave Desert in California is a more attractive candidate for photovoltaic power than putting solar panels on roofs in Berlin, Germany.  Though it is important to clarify that just because a region receives less solar irradiance, it doesn’t mean that solar energy doesn’t work in less sunny places.  Check out this amazing image below for further comparison.

But what if we never needed to worry about global differences in irradiance levels, the Sun setting on our solar panels, cloudy days minimizing the Sun’s energy, or any other type of atmospheric disturbance negatively impacting our solar energy harvesting?  Well, Japan is planning on developing a space-based solar platform that will collect energy from the Sun’s rays 24-hours a day/365 days a year, with ZERO atmospheric interruption, and then beam down this energy to be used as electricity here on Earth, effectively erasing the “weaknesses” of solar power on Earth.

What is Space-Based Solar Power?
The concept behind a Space Solar Power System (SSPS) is the deployment and usage of a satellite to capture the Sun’s radiation, convert it into electricity, and send it to Earth to be used as electricity. The two main theories that have been floated as a means to send electricity back to Earth from a high orbit of 36,000 kilometers (approximately 22, 369 miles) are laser beams and microwaves.  The reception of these beams and/or microwaves would present further challenges such as avoiding harm to living creatures by beams/microwaves and building large receptacles that could measure as much as three kilometers across.

If this sounds futuristic and cutting edge, it might surprise you to know that the idea for SSPS was first proposed by the American scientist Peter Glaser in 1968.  So why are we hearing about this idea now, all these years later?  Though NASA and the U.S. government decided back when Glaser came up with the concept that it was too costly and that implementation and development was not worth the expense, the Japanese space agency JAXA nowadays seems to think the opposite.  By 2030, they plan to have a SSPS up and operating, helping to overcome the removal of nuclear energy from the Japanese energy production portfolio following the Fukushima nuclear disaster.  The project will produce about 1 gigawatt of energy, approximately the same amount as a mid-size nuclear power plant.

Developing the necessary technology and deploying it successfully will require at least billions of dollars and countless manpower hours, but Yasuyuki Fukumuro, the man in charge of research planning for the SSPS project at JAXA, believes “Japan currently has the most advanced technology to [develop a SSPS].”  Japan certainly has the motivation to overhaul its energy infrastructure, and I for one am glad they are looking at revolutionary concepts in renewable energy and not fossil fuels.