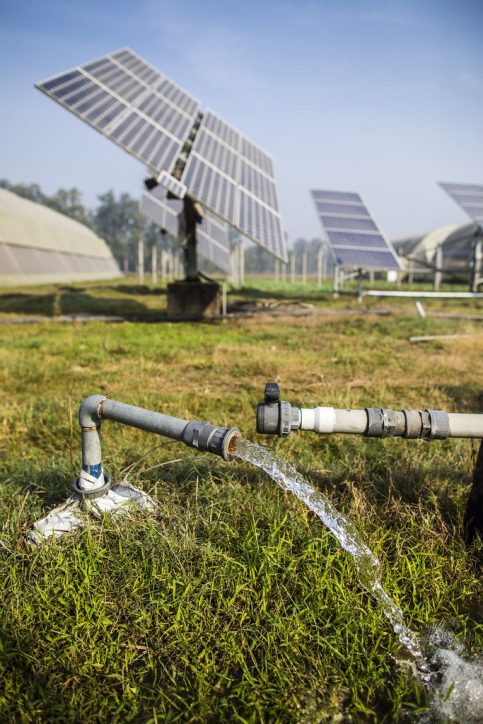 The concept of a solar water pump system is still relatively new. However, like all other water pumping systems, the mechanics are quite similar. It relies on the basic principle of positive displacement and kinetic energy, which is used to move water from one point to another. Like any other mechanical system, energy needs to be put into it for it to work.

WHAT IS SOLAR WATER PUMPING SYSTEM

As explained above, a solar water pumping system is a mechanical system, which draws its energy from the sun. It uses the sun’s energy to drive mechanical bits, which then move water from a source, which could be a river, storage tank, or an underground well, to a set destination. This destination could be an agricultural field or a storage tank for use within the home. Here is a video that describes how it works.

The idea to use nature as a source of energy to pump water has been around for over a thousand years. Before the solar water-powered pump was invented, Dutch engineers had been using windmills to pump water for over 1000 years. Using the wind proved to be quite reliable when it came to pumping water. It was so effective that the Dutch managed to recover over half of their country from the sea, just by using the wind’s energy to pump water out to sea.

Solar water pumping was invented in the 70s. At the time, the system was quite basic, and it paired solar panels to a DC/AC water pump. Since then, it has gone on to be perfected. Today, the solar water-powered pump can be found in different industries such as the agricultural sector, industrial sector, and domestic settings.

A major benefit of using solar water-powered pumping agricultural fields is that most irrigation needs to be done during the dry season. This is often the season of the highest solar intensity with clear skies. Consequently, there exist optimal conditions to harvest solar energy at a time when it is needed the most.

A solar pump system is made of three basic components. These are the solar panels, solar pump inverter, and water pump. At its most basic, the solar water-powered pump is an electric pump, which is powered by electric energy that is harnessed using solar panels.

The first component is the solar panels, which gather the sun’s energy and convert it into electric power. These panels have to be optimally positioned to ensure they receive as much of the sun’s rays as possible. In some instances, a tracker may be installed to ensure that the panels are often facing an optimal direction to receive the sun’s rays. This energy is then sent to the solar vfd.

The solar pump controller is a device used to control the solar pump and keep it from stalling when the sun’s rays are weak. Some advanced controllers have features such as a terminal for the float switch where the pump can be shut off when the water tank is full. Additionally, they may feature protection from overvoltage.

Using the solar pump controller, the operator can adjust the pump pressure, flow, frequency, operational times, and more. These controllers often feature a solar pump inverter in advanced systems. The use of solar inverters is often necessary when the solar pump motor is an AC motor. Pump controllers often come with advanced features needed to operate AC solar pump motors. These features include networking communication capabilities that enable off-site supervision as well as the ability to make operational adjustments.

The water pump is another important feature of any solar water pumping system. Pumps come in different configurations. The three most common are the submersible, circulator, and booster pumps.

The submersible pump is often used for solar water pump systems that draw water from deep wells or boreholes. On the other hand, the circulator pump is often used to circulate water to keep it warm and to ensure a continuous water supply. Finally, the booster pump is used to provide the pressure required to move water from a storage tank to the entire facility.

Solar water pumps can work in any region of the world where there is adequate solar insolation. They are particularly suited for off-grid, rural areas where introducing the grid would be too costly. It makes them the perfect solution for most of South America, South Asia, SE Asia, and Africa. These regions all have high solar insolation and low connectivity to the grid. However, a solar water pump system can be installed in almost all habitable regions of the world.

Besides providing water for a home, a solar-powered water pump can be used to provide water for livestock. It can be an especially useful solution for cattle ranches in southern Africa, the Americas, and Australia. Instead of driving cattle long distances to access water, it can be continually pumped to conveniently-situated watering points. It is already common to use solar water pumps in these regions, where they are used to pump water through up to 5 kilometers of pipelines.

Solar water pumps can also be used to water small farms, vineyards, and gardens. The most economic configuration for a small garden is to pump water directly to a gravity tank and then distribute it using gravity flow.

There is no limit to how big solar pumps can be made. However, it is often the case that using them in small installations is most economical, where the use of fossil fuel systems would not make sense. Some of the smallest solar water pumps can run on 150W of PV and they can lift water from as low as 200 feet below ground at a rate of over 5 liters per minute. On a 10-hour sunny day, such a system can lift up to 3400 liters of water. This is enough to water a small orchard, a small herd of cattle, or several small family units. These are mainly from DC solar pump system if you only need small water flowers. AC solar pump systems are more popular since it has larger water flowers to meet various water demands, what’s more, their performance is more stable.

WHAT ARE THE ADVANTAGES OF SOLAR PUMP SYSTEM?

One of the benefits of using a solar pump system is that it lets you utilize low-yield water sources. With a slow solar pumping system, you can potentially cut the cost of installing long pipelines. Since the length of the pipes does not affect the energy needed to pump water, the water can be pushed over long distances at a low cost.

Another benefit of using a small solar pumping system is that it does not require any specialized skill. Anyone with basic literacy skills can read the simple instruction manual needed to set up a small solar pump. It is especially useful in rural areas where finding specialized experts and equipment would be a challenge.

IS IT WORTH FOR FARMERS TO INVEST SOLAR WATER PUMPING SYSTEM?

When installing a solar water pumping system, one of the factors that may discourage farmers is the high upfront cost. However, when you look at the benefits they will receive, it is worth it. For instance, a solar water pump does not produce harmful pollutants, which end up in the soil and crops. And it can bring great harvest for farmer easier.

What’s more, the ROI (Return On Investment) of installing a solar-powered water pump system is attractive enough. For most areas around the world, normally the farmer only needs 3-5 years can earn back its investment.

Besides that, a solar water pump allows farmers to have a positive impact on climate change. One of the most affected industries by climate change will be farming. This is because unpredictable weather patterns often affect crop output. By making a positive contribution to the fight against climate change, farmers can help protect future generations of farmers.

HOW MUCH DOES A SOLAR PUMP COST TYPICALLY?

There are many different quality solar panels and solar pump inverters in the market. Their prices are much different. Is it mean should you choose the lowest cost for solar pump system components? Of course not, if you choose the cheapest products, it means you have a high risk to get not reliable products because you get what you paid normally.