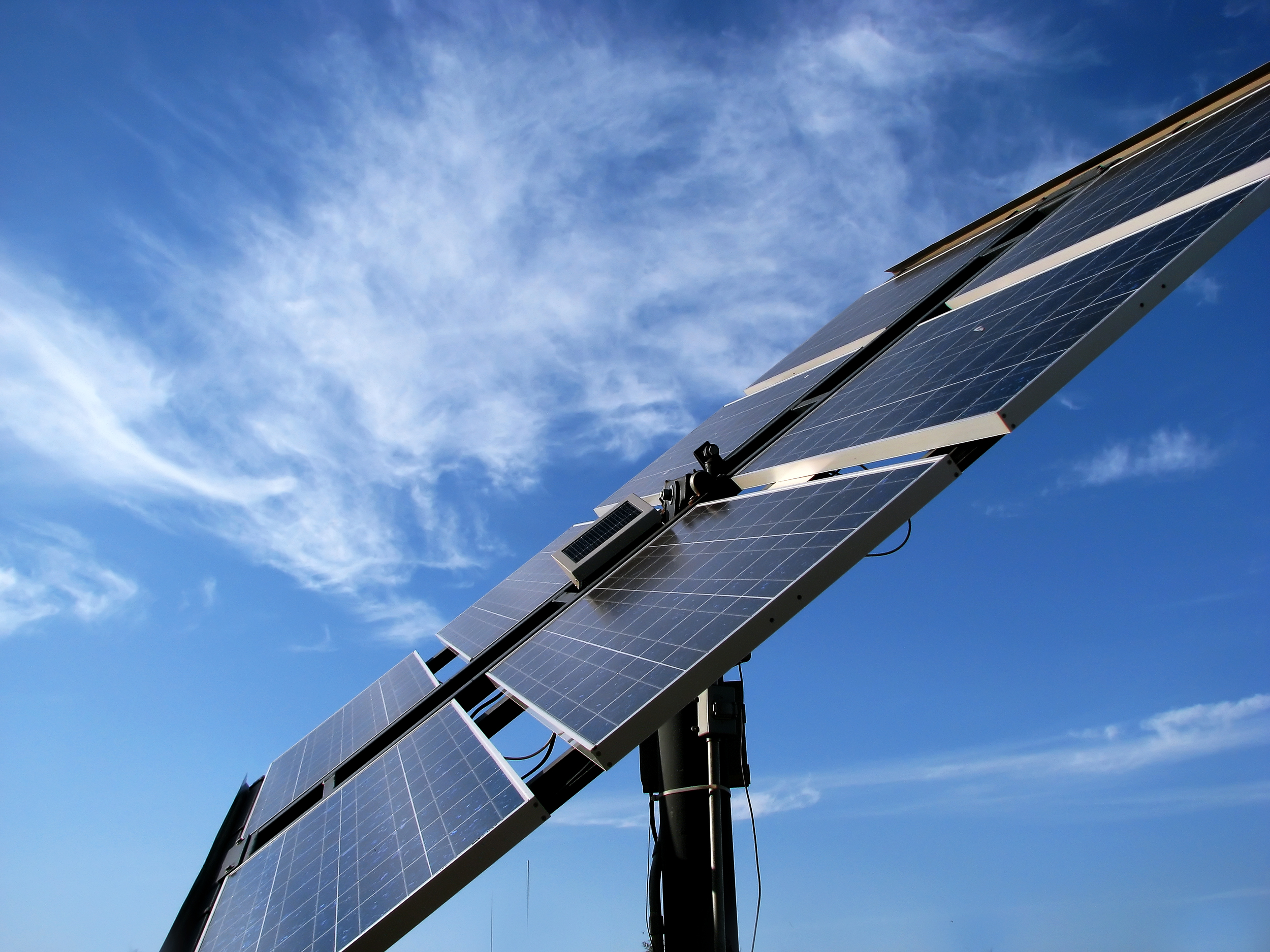 Solar trackers are a type of device with photovoltaic (PV) panels, which accurately tracks the path of the Sun throughout the day.

Typically, a solar tracking system adjusts the face of the solar panel or reflective surfaces to follow the movement of the Sun.

The movement of solar trackers increases the solar energy output by up to 40% than standard panels.

Solar trackers are increasingly used in both residential and commercial-grade solar panels due to improved and more efficient solar trapping technology.

In this article, we will talk about different types of solar tracking systems and their advantages and disadvantages.

Solar tracking systems can be classified by the mode of their motion.

There are axes for a moving surface: two horizontal axes and one vertical axis.

The surface can be rotated around each axis (tilted) to get the right angle for receiving the maximum sunlight.

When movement or adjustment of the surface happens by rotating around one axis, it is called single-axis tracking.

On the other hand, when the rotation of the surface happens around two axes simultaneously, it is called dual-axis tracking.

Single-axis trackers usually move from the east to the west and follow the Sun’s direction.

Single-axis trackers have only one angle that is used as the axis of rotation. This type of tracker can increase electricity production by more than 30%.

These trackers provide an efficient, simple, and low-cost way to improve the functioning of solar installations.

Also, these trackers can optimize the performance of the Sun during the summer and spring seasons, when the Sun is in a higher position in the sky.

The usefulness of single-axis trackers, however, drops as they move farther towards the North. It is because the variance of the solar angle is higher between the summer and winter seasons.

Also, the performance drops during the other times of the year for the horizontal position of the Sun. At higher latitudes, vertical axis trackers work better.

This way, solar arrays or panels can track the position of the Sun during winter as well as summer.

Now, let us talk about different types of single-axis trackers such as horizontal, vertical, tilted, and polar aligned.

Horizontal single-axis solar tracker rotates from east to west throughout the day on a fixed axis which is parallel to the ground.

This type of tracker is considered the most cost-effective tracker geometry in many applications.

Single-axis horizontal trackers can follow the Sun’s movement from the morning to evening across the sky.

An HSAT structure may be supported at many points along the rotating axis and therefore requires less complexity and less material for construction than other tracking geometries.

The horizontal tracking geometry is more preferred as it reduces the structural material requirements by keeping the modules at a relatively low profile to the foundation.

Also, no special connection is needed to rotate the system about its center of gravity.

This type of single-axis solar tracker is similar to the HSAT. However, the device is installed at a certain tilt.

HTSATs are tilted upward and toward the south or the northern hemisphere and rotate the panels from east to west throughout the day to track the Sun’s movement.

Because HTSATs are more complex, they may be expensive. Also, the potential requirement to have a concrete foundation adds up cost.

Generally, HTSATs is not scalable, which means the mechanical components are not shared between units. Due to this, the cost per panel may not be lower in larger arrays.

Vertical single-axis solar trackers or VSATs rotate from east to west following the Sun throughout the day.

These systems are often installed in high-altitude or mountainous locations.

The profile of VSATs is not parallel to the ground, because of which it is easier for these trackers to maintain a consistent angle of solar incidence when the Sun is lower in the sky.

This is particularly beneficial in northern latitudes, for example, between 40° and 55°. However, unlike planar horizontal arrays, vertical field layouts need to accommodate the taller profile of the vertical tracker and spread units out to avoid self-shading and energy losses.

As a result, vertical single-axis trackers tend to have a relatively lower power density per acre.

This type of tracker is similar to a horizontal, tilted single-axis tracker. The only difference is that the tilt is parallel to a horizontal position and rotates on a vertical axis.

In VTSTATs, structural requirements are higher, and as a result, more steel and concrete are used compared to a horizontal array.

Installation of a solar tracking system may require some additional parts and gears to add to the solar panel system, and they require maintenance from time to time as well.

Dual-axis trackers have two rotation axis degrees, which are called the “primary axis” and the “secondary axis.”

The rotational axis can move downwards or upwards to adjust with the angles of the Sun throughout the day.

Dual-axis tracking allows for the most accurate orientation of the solar device and is said to provide 40% more output through energy absorption. However, these solar trackers are more complex and expensive.

Typically, dual-axis tracking is used to orient a mirror and redirect sunlight along a fixed axis towards a stationary receiver.

As these trackers track the sun’s path vertically and horizontally, they help obtain maximum solar energy.

Azimuth-altitude dual-axis trackers can solve both issues. However, these trackers can be expensive and add nearly $3,500–$6,500 to the solar installation cost.

The function of dual-axis trackers depends on vertical and horizontal pivots, which are controller-guided similar to solar telescopes. These are quite costly, and their usage is generally limited to solar energy systems of commercial grade.

The accurate tracking of dual-axis solar trackers is also used in a focused solar application, such as mirrors that direct sunlight receivers and convert sunlight into heat.

Other Types of Solar Trackers:

Passive solar trackers use a compressed gas fluid with a low boiling point that rotates to one side or the other to make the tracker move in response to an imbalance.

As this type of orientation is not precise, it is not suitable for certain types of concentrating photovoltaic (PV) collectors but works fine for common PV panel types.

Active trackers, on the other hand, use motors and gear to direct the tracker by a controller, responding to the solar direction.

Because the motors consume energy, they need to be used when it is necessary.

Solar trackers, be it single-axis or dual-axis, can help generate the optimum level of solar power.

This is why it is important to decide which type of tracker is suitable considering various factors, including the terrain, climate, and the type of solar panels that are being used.

If you are a solar installer, depending on the budgetary constraints of your client, the terrain and climate, and the lifespan of the system, you need to consider the key factors to make the right decision.

Now, when it comes to the future of the solar tracker industry, it seems pretty bright. In 2018, the estimated size of the global solar tracker market was $2.92 billion, according to the Grand View Research.

The market is expected to expand at a CAGR of 14.1% by 2025 due to the growing demand for solar cells or photovoltaic cells. This growth rate is expected to continue in the coming years.