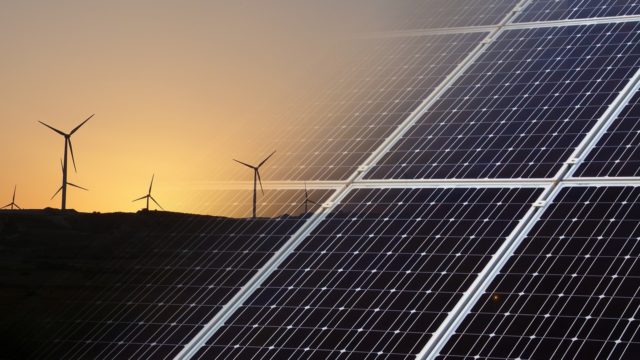 In our current time, the majority of the world relies heavily on fossil fuels like coal, oil, and natural gas for energy. And though technically, they do provide us with sufficient energy, using them is not really a good idea in the long run. This is because fossil fuels are non-renewable, which means that they draw on sources that will eventually run out. And once these finite sources finally dwindle, they will be too expensive or too environmentally damaging to get back.

Table of Contents hide
I. Solar Power vs. Wind Power: Compare and Contrast
I.I. How Do They Work?
I.II. What Are Their Advantages?
I.III. What Are Their Disadvantages?
I.IV. Where Do They Work Best?
I.V. How Efficient Are They?
I.VI. Which Is More Efficient?
I.VII. How Much Does It Cost to Build a Wind Turbine or Install a Solar Panel System at Home?
I.VIII. Which Is Cheaper in Terms of Cost Per kWh?
II. Takeaway
II.I. Share:
II.II. Related

That is why, as early as possible, we have to find another way to generate energy without using fossil fuels. In other words, we need to start using energy that is renewable. Thankfully, our planet actually has a lot of renewable sources of energy. And two of the most popular right now are solar energy and wind energy.

But what are the differences between these two? And — if it’s possible to answer this question — which one is the better option?

How Do They Work?

True to their names, solar energy and wind energy generate electricity by using the sun and the wind, respectively. That is the easy way of describing the two of them. The way they actually work is a little more complicated than that.

To begin with, solar energy generates electricity either through the sun’s heat or the sun’s light. The former makes use of the Concentrated Solar Thermal systems (CSP), which concentrate the radiation of the sun to heat a liquid that will then be used to drive a heat engine and drive an electric generator. Meanwhile, solar energy can also produce electricity through light and the technology of Photovoltaic (PV). Simply put, solar PV cells absorb light, which then knocks electrons loose. Then once those loose electrons flow, a current is created, which is then captured and transferred into wires, effectively generating direct electric current.

Wind energy, on the other hand, is actually another form of solar energy. It is caused by a combination of three concurrent events: 1) the sun unevenly heating the atmosphere, 2) irregularities of the earth’s surface and 3) the rotation of the earth. The way wind power works is that it uses wind turbines to convert the kinetic energy from the wind into mechanical power. And then, that mechanical power can be used for specific tasks like grinding grain or pumping water, or a generator can convert it into electricity.

What Are Their Advantages?

Solar energy has the following benefits:

As for wind energy, the following are its advantages:

What Are Their Disadvantages?

Solar energy has the following disadvantages:

For wind energy, the main disadvantages are:

Where Do They Work Best?

Since the sun is pretty much everywhere, then it’s safe to say that solar energy can work anywhere as well. At least, generally speaking. However, it should be noted that there are some places that are more exposed to the sun than others. So, even though the sun is everywhere, there are still particular places that are more ideal for solar panel conversion. These places are usually those that are located near the equator.

Meanwhile, the wind is not as reliable and available and the sun is. So, when it comes to wind energy, geography matters a lot more. Wind turbines require environments that are almost barren of large windbreaks and buildings. There should be no tall growth or structure that can interrupt the steady flow of wind. And aside from that, some areas don’t allow the construction of any type of structure beyond a certain height. So, basically, wind energy is restrictive in terms of where they can be constructed.

That said, wind power systems are reported to do very well in the Plains states. Coastal areas, at the tops of rounded hills, open plains, and gaps in mountains are other ideal places where wind energy might work the best.

How Efficient Are They?

For solar energy, it actually depends on the technologies used. As mentioned earlier, solar energy either makes use of the CSP systems or PV. Between the two, CSP systems are more efficient because they can store energy through the use of Thermal Energy Storage technologies (TES). In other words, even without the sun — like during nighttime or during cloudy days — they can still generate electric power. This is unlike the PV systems since PV systems aren’t capable of producing or storing thermal energy since they use direct sunlight, not the sun’s heat. So, with PV, only a small number of energy can be converted into power — around 14% to 22%.

In other words, yes, generally speaking, solar energy is pretty efficient. But that would depend on the system that you choose.

As for wind energy, wind turbines can convert nearly half of the wind hitting them into electrical power. The efficiency is measured based on the actual amount of kinetic energy that’s converted. And for wind turbines, the ultimate conversion rate is estimated to be about 60%. The reason why the ultimate conversion is about 60% and not 100% is because if a turbine could absorb 100% of the wind’s energy, the blades of the turbine would automatically stop turning.

Which Is More Efficient?

For a lot of homeowners in the United States, solar energy is the much-preferred choice. But for the increasing number of commercial entities, the preference is more inclined towards wind power.

The one strong benefit of wind over solar for your home is that wind turbines aren’t fully dependent on the sun. So, it can generate power 24 hours a day. Furthermore, the wind is considered more efficient than solar because these systems use less energy, release less carbon dioxide, and yet still produce more overall energy. One single wind turbine can generate the same amount of electricity in kilowatt-hours as thousands of solar panels.

But just because wind turbines produce more energy doesn’t make wind energy the undefeated winner. Solar energy, through the CSP systems, can also be used even without the sun. The only problem is between CSP and PV, PV is more popular because it’s the cheaper option.

How Much Does It Cost to Build a Wind Turbine or Install a Solar Panel System at Home?

It’s difficult to determine the average cost to install a rooftop or ground array solar system because it changes every now and then. A variety of factors always alter the cost, and these factors include the type and number of panels being installed, the area of the country where it will be installed, local pricing and installation fees, and incentives. That said, the unsubsidized monthly cost for financing a rooftop array for an average of 2,000 square foot home can range between $87 and $219 a month for materials and installation costs.

As for wind energy, a typical American home would need a small turbine that can generate at least 5-kW. In order to buy and install a wind system large enough to power an entire home, the cost is about $20,000. But this price can still change, depending on the size of the home, the type and height of the system, and any other extra related costs.

Which Is Cheaper in Terms of Cost Per kWh?

Meanwhile, for solar systems, you will need a 7 kW system to produce the same amount of power. And the national average cost of installing solar is 3.08 per watt, thus making the cost of a 7 kW system $21,480 before the 30% tax credit.

So, in a way, both wind and solar energies are alike in terms of initial costs to get a set amount of kWh of electricity per year. However, you should take note that wind has far higher ongoing maintenance costs than solar. It also only has a 5-year warranty typically. What this means is that over the life of a wind system and solar system, the actual cost per kWh with solar is less than half the lifetime cost per kWh of wind for small-scale systems.

With this, you can say that solar is the clear winner for residential applications.

In this day and age, it’s becoming more and more important to find alternative ways of generating energy without damaging the environment. It’s a blessing that renewable sources do exist, and we can use them. Two of the most widely popular renewable sources are the sun and the wind.

Both solar energy and wind energy have the same goal of producing energy in a way that is clean and efficient. But despite their similarities, they do have their own lists of differences and of benefits and disadvantages. Generally speaking, solar energy seems to be more superior than wind. But that doesn’t make it the clear winner. This is because, for some places, wind energy might actually be a better fit than solar.

Basically, both solar energy and wind energy are good alternatives for the production of energy. They can be useful in their own time and place. So, whichever a customer will end up choosing, it won’t really matter much. Because both of them are trusted and approved, so everyone will get their money’s worth.