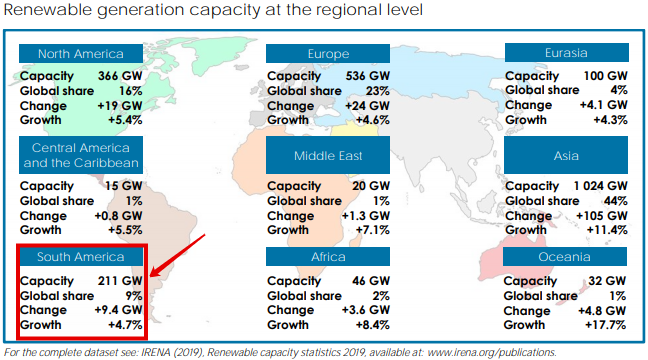 Globally, the pace of PV installation is likely to go up to 125 GW per year from 2020, according to a report by Wood Mackenzie.

It seems that Latin America is going to have a significant contribution to the continuous global solar capacity expansion.

The renewable energy capacity in the world has increased by an average of 8% during the last decade. A significant part of this growth has taken place in Latin America, which was $54 billion between 2012 and 2015.

Energy policies and energy trade dynamics vary in different Latin American countries. Despite that, most countries have been able to scale up solar energy due to deploying floating solar technologies.

Different drivers steer the expansion of renewable energy in Latin America. The countries that are leading the way in solar energy are Mexico, Brazil, Chile, Honduras, Peru, Argentina, and other countries.

Together these countries account for nearly 77% of the total energy consumption and approximately 75% of the total renewable energy capacity in Latin America.

Among Latin American countries, Mexico looked the most promising in 2018. The energy capacity of the country in that year was 2,555 MW.

After the deregulation of the energy sector in 2014, Mexico has been on the fast-track to generate renewable energy and meet the country’s target of 35% clean energy generation by 2024.

The Aura Solar I, in La Paz, Baja California state has one of the largest solar power plants in Latin America.

Also, the Villanueva Solar plant is another large plant in Mexico that had 310 MW installed capacity by mid-2018.

Mexico has an aim to reduce carbon dioxide emissions by 50% in 2050.

Brazil reportedly has the cheapest solar energy market in Latin America with a rate of $16.95/MWh. Earlier, Mexico used to offer solar energy for $18.93/MWh.

Brazil is one of the emerging countries when it comes to expanding solar capacity. The country’s installed renewable energy capacity accounts for more than 52% of the total renewable capacity in Latin America and consumes 6% of the total energy.

Just like Mexico, Brazil has also set a target to bring down its carbon emissions by more than 40% by 2030.

Chile is another Latin American country that is leading the solar energy revolution in the region. The government aims to move away from the country’s dependence on fossil fuels, which still account for 55% of electricity production.

During the last decade, Chile has invested nearly $7 billion in renewable energy, with more than 80 solar projects that are in progress.

The solar power plant in the Atacama Desert is the largest in South America. Shortly, the plant is expected to generate 196 MW of solar energy.

By 2035, Chile plans to produce 65% of its electricity from renewable sources, a percentage that will increase to 70% for 2050.

Honduras has been on an accelerated path of generating solar energy capacity.

The country has surpassed other leading countries such as Uruguay and Argentina, in terms of total solar PV capacity.

Earlier in 2016, the PV plants in Honduras accounted for 10.2% of the country’s electricity, and it was the first country in the world to achieve that feat.

In 2018, the total solar energy capacity in the country was an impressive 345 MW, more than the countries like Argentina and Uruguay.

According to the Ministry of Energy and Mines (MINEM), the demand for renewable energy is likely to grow at 10% per year, which is supposed to get a boost by industrial growth.

The government in Peru has set energy targets that renewable energy will meet 60% of the total consumption by 2025.

According to the government reports, since rolling out the “2005–2030 Energy Plan,” the public and private investment in renewable energy in Uruguay has been 17% of GDP or nearly $7 billion.

In 2018, Uruguay’s total solar energy capacity stood at 248 MW. The future potential to generate solar power in the country is encouraging, considering that the country receives 1700 KW/m2 of sunlight a year on an average.

Currently, 50% of its energy comes from renewable sources. These days, Solar PV power is being implemented on a large-scale.

Uruguay has put a strong emphasis on providing solar energy in rural areas; especially rural schools that are far from the grid. Also, the aim is to make hospitals, public buildings, sports clubs, and hotels energy-efficient.

Currently, Argentina is committed to becoming solar energy efficient. A good example is the Jujuy city, which is completely reliant on the supply of solar energy.

In recent years, the government in Argentina had invested $1.8 billion in producing clean energy, and there is a drop in greenhouse gas emissions by 30%.

A decade back, the renewable energy market was almost non-existent in Latin America. In 2007, total installations in the region were just 30 MW.

Over the years, Latin America has emerged as one of the leading regions in installing solar capacity, which went up to 537 MW,

The countries in Latin America that have witnessed substantial growth in solar energy are Brazil, Mexico, Chile, Peru, Honduras, Uruguay, and Argentina.

Other countries have relatively small but growing solar energy markets that have the potential to grow into prominent markets in the coming years.

Again in 2017, Latin America had the largest solar trackers market. In 2018, the region’s global shipments reached 20 GW, an increase of nearly 30%.

Latin America still meets a small part of global renewable energy demand. However, markets are expanding rapidly, and large corporations are investing in the region seeing its energy growth potential.

Another report by GTM Research states that the solar energy market in Latin America is about to see exponential growth. The forecast indicates that the installed capacity of solar PV energy will be 41 GW between 2016 and 2021.

At the end of the current decade, Latin America may represent 10% of the global demand for PV  energy.

This growth statistics prove how the solar energy market in Latin America has matured and attracted investors from all over the world.

What are the reasons behind the surge of the solar industry?

The main reason behind the surge in the Latin American solar industry is the governments’ decision to move away from fossil fuels, and adopt solar energy.

Subsequently, on July 26, 2016, Ecuador signed the agreement to join hands with other countries to push solar energy growth.

The agreement set ways to bring down greenhouse gas emissions through more adaptation of renewables, and make the ecosystems more resilient to combat global warming.

Now, these countries have the objective that by 2050, 20% of the energy will be produced from clean energy sources.

In recent years, Latin American countries have rolled out solar-friendly policies. These policies have paved the way for the solar energy market in the region to become a mainstream energy source.

In Latin America, the three most promising markets for solar installations include Brazil, Mexico, and Chile. These countries have gradually restored financial stability after a period of recession.

More involvement of companies in the solar energy sector is likely to become a critical factor in the region’s financial growth.

Some of the regions in Latin America get high irradiation, which is ideal for generating solar energy. For example, the Solar Belt in Baja California, Mexico, and Sertão in Brazil get irradiation between 1,600 and 2,250 kWh/m2 per year.

This favourable climate condition has a high potential to grow solar energy in these regions and can meet all of South America’s energy requirements.

Economic Index of the Solar Industry in LATAM

Large companies are investing in the region, boosting the expansion of the solar energy market. As mentioned earlier, the top country that added maximum in 2018 was Mexico (2555 MW).

One of the reasons for the substantial growth in Latin America has been due to the grid connection of several large projects. Another reason was a significant spike in projects under the net metering scheme in Mexico.

Much of the added solar capacity in Latin America has taken place through large-scale solar power purchase agreements (PPAs). Many PPAs were announced in 2018, which made Latin America one of the leading continents with substantial solar plants in the world.

In Latin America, investment in solar energy is rising for several reasons.

A report by National Geographic shows that countries such as Mexico, Uruguay, Brazil, Costa Rica are having positive trends towards increasing reliability in solar energy.

Particularly, Costa Rica was the first country that ran all the energy-powered operations entirely on renewable energy for 300 days in 2017.

Also, from a commercial point of view, large global companies are investing and driving renewable energy goals. For example, Google has made a significant investment in renewable energy, and the company receives 100% of its energy from the El Romero plant.

In recent years, Latin America has seen a boom in the solar PV market.

It is a clear indication that the region is going through a transition from dependence on fossil fuels to renewable energy, particularly solar energy.

The photovoltaic boom in Latin America seen from country to country. The figures reflect the clear rise in photovoltaic solar energy in this region.

When it comes to solar energy production, Mexico has Latin America’s largest solar project in Coahuila. This plant is likely to provide solar energy to millions of homes in Mexico with a capacity of 3 GW.

Brazil is the second country after Chile to go beyond the 1 GW of PV solar capacity.

Chile has installed PV solar capacity of 2.1GW, which indicates a remarkable rise of solar energy boost in recent years.

Argentina has a record of 135 renewable energy projects worth $7,200 million.

In Bolivia, at the end of 2018, a 60-MW solar plant was opened in Uyuni. Earlier, another project of 5 MW solar energy plant was started in March.

The contribution of renewable energy to the electric mix only reaches 3%, and the government announced that by 2028, there could be between 143 and 239 MW of solar.

The Latin American region, with its rapid growth of the solar energy market, has become one of the major contributors to the global solar market.

All of these factors have combined and put Latin America one of the major solar energy markets in the world.