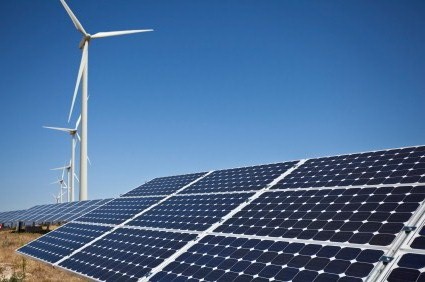 Not only did solar installations soar in the US this past quarter, but solar surpassed wind as the top renewable energy investment worldwide in 2011, according to twin reports from the United Nations Environment Programme (UNEP) and the Renewable Energy Policy Network for the 21st Century (REN21).

Solar attracted almost twice as much investment as did wind, jumping 52% to $147 billion, led by booming rooftop PV installations in Italy and Germany. Small-scale PV also spread in countries like the UK and China and there were significant investments in large-scale concentrating solar projects in Spain and the US.

On the other hand, it was a mixed bag for solar venture capital
and stocks on the public markets have been crushed because of falling subsidies and the impact of oversupply and low prices on manufacturers.

Investments in renewable energy rose 17% to a record $257 million, a six-fold increase from 2004 and 94% higher than 2007, the year before the world financial crisis took hold, according to UNEP.

Although last year’s 17% increase was much smaller than the 37% growth recorded in 2010, it was achieved at a time of rapidly falling prices for renewable energy equipment and severe pressure on fiscal budgets in the developed world.

In 2011, renewable energy supplied 16.7% of global energy consumption as 118 countries implemented targets, more than half of those in developing countries.

Excluding large hydro, renewable energy accounted for 44% of all new generating capacity added worldwide, up from 34% in 2010. 40% of new capacity was in wind and 30% in solar PV.

Solar panel prices dropped 50% and onshore wind turbines by close to 10%, bringing the price of these technologies closer to grid parity with fossil fuels.

In fact, rooftop PV is already competitive with retail daytime electricity prices in Germany, Denmark, Italy and Spain, and the state of Hawaii.

In China, solar grew 17% representing $52 billion in investment, but the US came very close to that with its 57% leap to $51 billion, as developers took advantage of expiring incentives.

India also showed impressive growth of 62% to $12 billion in investment and Brazil grew 8% to $7 billion.

The top seven countries in renewable energy capacity (excluding large hydro) account for 70% of the market: China, US, Germany, Spain, Italy, India and Japan. Europe has 37% of that capacity.

In Europe, solar was the most installed energy source, renewable or not, increasing 63% to 21.9 GW, more than wind and natural gas combined, according to the European Photovoltaic Industry Association.

In 2011, European nations installed 75% of global capacity and if solar and wind installations remain stable in 2012, they would supply enough electricity to compensate for closing Germany’s nuclear reactors.

In fact, US-based First Solar announced it would postpone closing its German plant because demand has remained so strong.

Expired incentives in the US and feed-in tariff cuts in Europe are widely expected to surpress growth there in 2013.

China will be the biggest solar PV market in 2013 and its largest manufacturers are ramping production to meet expected demand.

Even with the world supply glut, Suntech plans to increase shipments 27% and Yingli Green Energy 37% from 2011 levels, according to Bloomberg.

Japan, the world’s sixth largest market, is also headed for a boom. It could install 4.6 GW in 2013 – it’s solar feed-in tariff goes into effect July 1.

But “In almost every year you look, forecasters’ cost-reduction assumptions and demand forecasts are too conservative,” Daniel Guttmann, head of renewable strategy at PricewaterhouseCoopers, told Bloomberg.