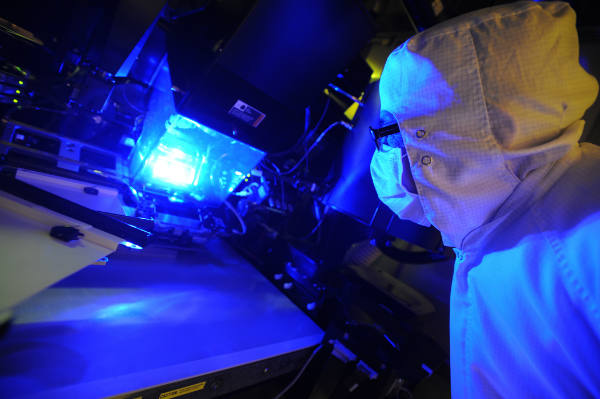 You don’t hear this too much these days with all the silicon photovoltaic manufacturers suffering from an overheated market, but Solar Junction may face shortages of its mullti-junction gallium arsenide PV cells for concentrating PV (CPV) systems even as the company ramps up production. Most recently the company received an order of 5 megawatts from SolFocus.

“I think demand is really close to supply for Solar Junction,” said SolarJunction Vice President of Technology and co-founder Vijit Sabnis. The company is basically already sold out for 2012. “We have more demand for solar cells than we can pump out today.”

The company is bringing up its cell manufacturing capacity to 40 megawatts towards the end of 2012 or beginning of 2013. “Even at that capacity, we won’t be able to keep up with demand,” Sabnis said. “We have orders in 2013 of several megawatts per month. That’s going to eat up stock quick.…One customer quoted a monthly rate that would outstrip our production for the year,” he said.

The company is transitioning from a research and development company to a high-capacity manufacturing facility on a track that doesn’t exceed market demand, according to Sabnis. CPV is just really taking off, going from small commercial projects in the range of 100s of kilowatts to utility-scale projects in the 10s of megawatts over the past year.

SolFocus, for instance, has numerous single megawatt projects, Sabnis said. Some of Solar Junction’s cells from the recent purchase may end up in those projects. however, SolFocus also is in planning stages for a 450 megawatt CPV project in Mexico. “We are hoping to be a large part of that,” he said.

At this point Solar Junction’s cells sell for about 20 cents per watt. The company is supplying them to multiple CPV manufacturers, which take the minute PV cells and use lenses to increase the amount of sunlight that hits each cell, sometimes by up 1,000 times. “We’re working with probably a dozen CPV companies,” Sabnis said. The companies also interested in roughly a dozen more up-and-coming PV companies but Solar Junction still needs to learn more about them and help them with the transition to installing CPV systems.