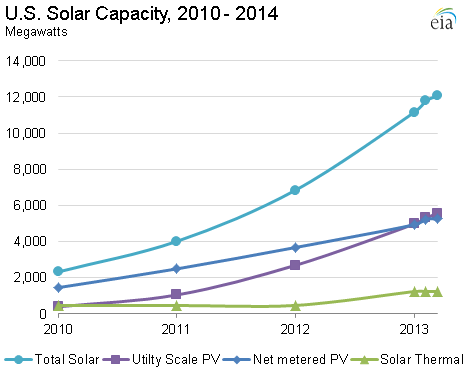 That’s according to information released by the Department of Energy’s Energy Information Administration (EIA) yesterday (April 22). The EIA reported that since 2010 the number of solar installations has grown 418 percent to 12,057 megawatts (1.3 percent of the nation’s energy capacity) by February 2014 from 2,326 megawatts in 2010, a nearly 10,000 megawatt gain.

“The U.S. solar capacity has moved quickly from a relatively small contributor to the nation’s total electric capacity into a one of comparative significance,” said EIA’s Glenn McGrath. “Much like the wind sector growth, which grew tremendously from 6,456 megawatts in January 2005 to 60,661 megawatts to January 2014, solar capacity is quite clearly up and coming.”

The results show that solar installers are busy across all sectors of the solar industry. For the majority of the time the net-metered market, which largely includes the residential solar market and commercial market, led all aspects of the solar industry. But that changed in 2013 when utility-scale solar exceeded the capacity of net metered solar reaching 5,564 megawatts.

The EIA reported that net-metered solar arrays increased at an annual rate of about 1,100 megawatts and now total 5,251 megawatts. “Although sunny California has the largest net metered solar capacity (38% of the total), abundant sunshine is not the only growth factor for this sector. Net metered applications are typically incentivized through various state level programs. New Jersey and Massachusetts together represent an additional 21% of the total net metered solar capacity,” McGrath found. He added that net-metered PV systems are evenly split between residential and commercial applications.

While PV in the utility and rooftop sects led the way. Solar thermal or concentrated solar power (CSP) started rising as two large projects came online. “The thermal solar sector expanded significantly in 2013 when three large plants, Solano, Genesis and Ivanpah, went on line adding a total of 650 MW of capacity,” McGarth said. “Solano is a particularly distinctive application in this sector due to its storage capability that extends the daily operating period and cushions sudden drops in output due to interruptions from passing clouds.”

In terms of utility-scale solar power California led the way with nearly half (49 percent) of utility solar or 2,702 megawatts. Arizona was second highest with 17 percent (960 megawatts).