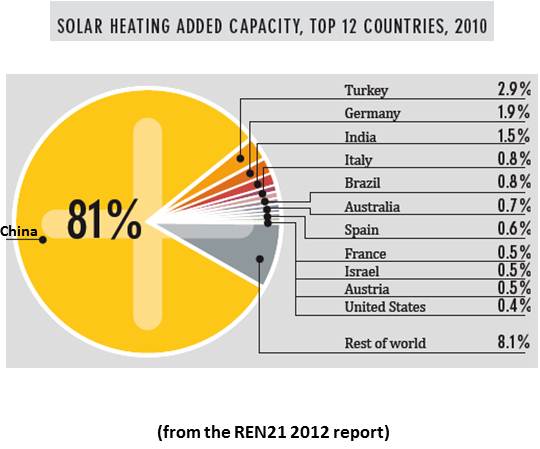 The crowds swarming this year’s Intersolar North America at San Fransicso’s Moscone Center did an unusual thing. After combing the aisles and aisles hosting the photovoltaic (PV) and concentrating solar power (CSP) technologies’ booths, they wandered over to the two aisles dedicated to solar thermal and stayed to ask questions.

What they found was lots of sophisticated versions of a solar technology that had its first U.S. patents filed in the 1890s. There are several modern kinds of solar collectors serving several purposes and different temperatures. Some are flat-plate collectors, some are evacuated tube collectors. Some have copper tubes that carry heating fluids like glycol. Some carry plain water. Some are in closed systems; some in open-loop systems. Some have plastic pipes. Some carry pumped water, and in some, the water follows gravity.

Around the world, the industry is booming. The global cumulative installed capacity in 2010, according to the most recent numbers from the Solar Electric Power Association (SEPA), was some 185 gigawatts-thermal. China led with 118 gigawatts-thermal installed.

Yair Katz, Quality Assurance Manager for Israeli SWH system manufacturer Chromagen, explained that his fossil-fuel-poor country, in order to cut its electricity consumption, instituted a law in 1980 requiring SWH systems on all new residential buildings. As a result, Israel is the per capita global leader and has more systems installed than the U.S.

The U.S. SWH industry is growing at 6 percent annually, according to recent SEPA statistics, but had only a 2.3 gigawatts-thermal installed capacity in 2010.