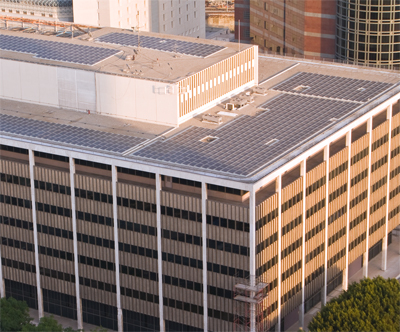 When it comes to rolling out solar across the rooftops, Los Angeles is the city to watch. With 100 MW of installed solar capacity to distribute among building owners who can sell back the energy to the grid, the city’s Department of Water and Power is currently implementing the largest solar feed-in tariff program in the U.S. How is the program progressing, and what sort of lessons has it learned that other cities can apply to their own initiatives?

A recently released evaluation of the first year of the feed-in tariff program (also known as Clean LA Solar) provides some insight. The study was commissioned by the Los Angeles Business Council Institute and conducted by UCLA’s Luskin Center for Public Affairs.

To get a handle on its performance in the first year of the estimated 3-year program, Luskin Center researchers J.R. DeShazo and Alex Turek interviewed Clean LA Solar administrators, solar developers and property owners about their experiences during the initial two phases. LA’s Department of Water and Power is tasked with deploying 20 MW during each six-month phase to qualified applicants.

What’s been going on

Since its launch one year ago and allocation of 40 MW of rooftop solar capacity (via 20-year contracts to each participant), Clean LA Solar is on track to meet its 100 MW goal by 2016, according to the evaluation, and has accomplished the following:

“Although the first and second tranches [phases] were successful, this study highlights an opportunity to make the process more user-friendly and cost-efficient in the future,” said LA city councilmember Mitchell Englander.

What could be done better?

Researchers identified opportunities for improvement. These include:

Clean energy advocates such as Environment California‘s Michelle Kinman says the program’s success so far is reason to start looking ahead on how the city can commit to an even larger goal of adding on 500 MW to the program to reach a 600 MW of total installed capacity by 2020.

“We want to start now on ramping it up,” said Kinman, clean energy advocate for the Los Angeles-based nonprofit organization. “It’s just scratching the roof of LA’s full power potential.”

Echoing the evaluation’s findings, Kinman said that the city needs to send a signal to developers of a continued and expanded commitment to solar, otherwise they may feel compelled to invest elsewhere.

Environment California is working with the LA Business Council and a coalition of other organizations to get the city to source 20 percent of its power — 1200 MW — from solar by 2020. The timing couldn’t be better, as Los Angeles is currently considering its future energy mix, thanks to a resolution passed last April which commits to being coal-free by 2025, two years ahead of a state mandate.

But while Los Angeles mayor Eric Garcetti, local and state officials and an array of organizations and community leaders have endorsed the call, the city has yet to formally sign on.

“Rooftops of office buildings, warehouses and apartments within the Los Angeles basin are proving to be outstanding sites for solar power plants,” said Brad Cox, chairman of the LA Business Council Institute. “With about 10,000 acres of rooftops in Los Angeles, we think the sky is the limit for the [Clean Solar LA] solar FiT program.”

The post How L.A. is Implementing the Nation’s Largest Solar Feed-in Tariff appeared first on One Block Off the Grid.