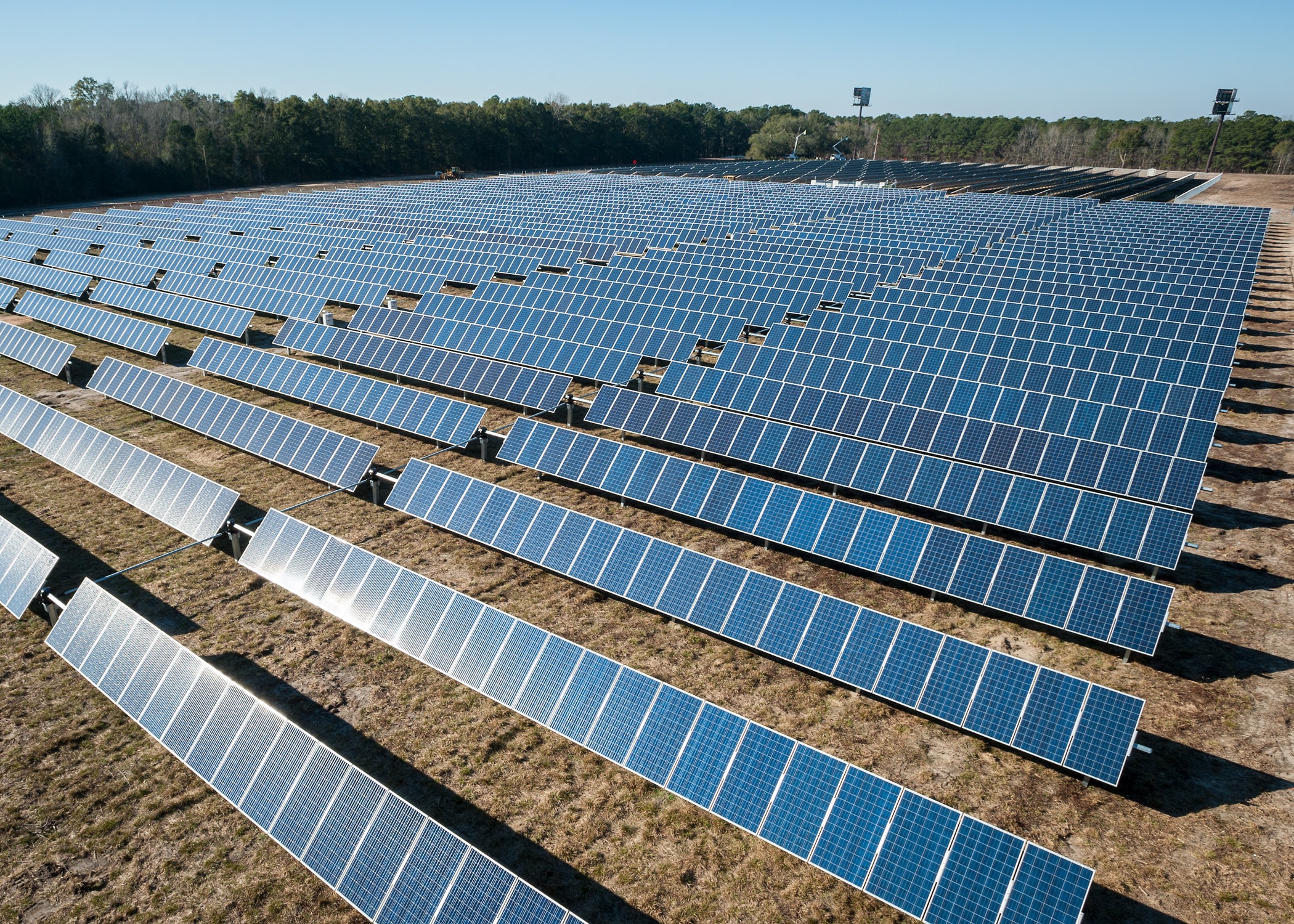 If you are in the solar industry, you may have already known that solar farms or plants can last 20 to 25 years!

Even more important is, after becoming that old, these farms will never be abandoned; rather, they would be fully functional and productive.

Besides, the installed solar panels can last 40 or 50 years! It sounds like an eternity. That is the beauty of natural energy like solar power.

Another interesting fact is that California, in the US, has brought about a revolution in the country’s solar industry.

California ranked No.1 in solar installations with 3.3 GW installed in 2018, and it receives nearly 14% of its electricity from solar.

Let’s take a look at the list of the largest solar farms in the United States here:

Solar Start has 1.7 million solar panels spread out in more than 13 square kilometres in Kern and Los Angeles Counties, California. That is nearly the size of 142 football fields or 4 times the size of Central Park!

The project is divided based on two separate installations — Solar Star 1 and Solar Star 2. The first one has a capacity of 314MW and the second one has 265MW.

Overall, Solar Star generates 579 MW of energy, which is enough to provide electricity to almost 255,000 households.

Here are a few more facts about the Solar Star project, collected from the California Energy Commission:

The Solar Star project was started in 2013 and completed in 2015. After it was completed, the farm has more than 1.7 million solar panels, was already producing more than 170 MW to the California grid.

Solar Star has completed its fourth year in June 2019, and it is still the largest solar farm in the country in terms of power generated. Other solar farms that are closer to Solar Star do not have the same kind of efficiency per area, based on their location and technological prowess.

The solar farm is spread out over the area of more than 15 square kilometres and provides enough power for 160,000 homes.

The capacity of the Topaz solar farm is 580 MW, and when operating at full capacity, it produces enough electricity to power nearly 180,000 households.

A study by the BHE shows that the production capacity of Topaz farm is enough to displace around 407,000 metric tons of carbon dioxide annually, which is equivalent to taking 77,000 cars off the road.

The solar modules in the Topaz solar farm are mounted together on panels that are supported by steel columns. The structure holds the modules about 5 feet (1.5 meters) above the ground.

Rows of panels are laid in a way that appears like large geometric shapes and is defined in part through access roads and stream beds.

The northernmost part of the solar farm, which is nearby to a transmission line, was the first to have been built.

The economic benefits this farm provides include an estimated $417 million in positive impacts, such as property and sales tax revenues for the County, wages from direct/indirect employment, induced spending and supply chain revenues.

The Ivanpah Solar is a concentrated solar thermal plant in the Mojave Desert and stretches five square miles. It is located at the base of Clark Mountain in California.

The $2.2 billion facilities were developed by BrightSource Energy and Bechtel. The largest investor in the project was NRG Energy which contributed $300 million.

The solar farm has a total capacity of 392 MW. It has deployed 173,500 heliostats, each with two mirrors focusing solar energy on boilers placed on three centralized solar power towers.

The first unit of the solar plant was connected to the electrical grid in September 2013 for an initial synchronization test.

The facility officially opened on February 13, 2014, and in the same year, it became the largest solar thermal power station in the world.

Many people, however, have also criticized this project for disrupting animal habitats and even “frying” birds that fly too close to the hot towers.

Nearly 300,000-plus mirrors that have been installed at the Ivanpah Solar Electric Generating System capture sunshine almost 330 to 350 days per year.

The steam generated from the heated water towers spins turbines that produce enough to provide electricity to 140,000 households in California.

The Agua Caliente Solar Project has been set up in Yuma County, Arizona.

This solar farm is built on an earlier distributed agricultural land, 65 miles on the White Wing Ranch. That piece of land was chosen after a thorough search on the availability of solar resources.

The project required minimal new transmission infrastructure due to its strategic location. The construction of the project was completed in April 2014 and has a capacity of 290 MW.

The $1.8 billion solar projects were originally initiated by NextLight Renewable Power, which was acquired by First Solar in July 2010. In August 2011, NRG Energy took over the project from First Solar.

The 2,400-acre facility can produce enough electricity for 230,000 households at peak loads.

When the Agua Caliente farm went live, it claimed the title of the largest solar farm in the world. Also, the project was named ‘Project of the Year’ by Excellence in Renewable Energy Award in February 2012.

The Crescent Dunes Solar Energy Project is a concentrating solar power (CSP) farm that is constructed near Tonopah in Nye County, Nevada, US.

The farm is spread over 1,600 acres of public land administered by the US Bureau of Land Management. It has been designed for an operational life duration of 30 years.

This solar farm, with the capacity of 110MW, is the first utility-scale solar power plant in the US, which is fully integrated with energy storage technology. It is also the largest solar power facility in the world with storage. The cost of the project was $1 billion.

Later, on February 2012, the project reached a major construction milestone, when the deployment of the central receiver solar power tower was completed. The 540 ft-tall tower is the tallest solar power tower in the world.

The commissioning phase of the project began in February 2014 after the construction was completed in 2015.

The plant is capable of generating nearly half a million megawatt-hours of emission-free electricity every year and can provide power to approximately 75,000 households.

The investors in this project include SolarReserve, the Spanish engineering and construction company ACS Cobra, and the Spanish banking firm Santander.

The Desert Sunlight Solar Farm is located about six miles north of the community of Desert Center. The capacity of this solar farm is 550 MW.

The co-owner of the solar farm are NextEra Energy Resources, GE Energy Financial Services, and Sumitomo Corporation of America.

Construction on the project started in September 2011. The farm provides support to California in its efforts toward generating one-third of its energy from renewable resources.

There are 8.8 million cadmium telluride (CdTe) modules in the farm produced by the US thin-film manufacturer First Solar.

The project also created around 440 construction jobs over a period of 26 months, providing wages and benefits to workers.

Construction of this solar began in January 2010. It was completed in less than a year, and the plant went live in December 2010. The cost of building the project was $141million.

The solar farm started producing solar electricity after the installation of the first 8MW block of solar panels in 2010. The project achieved a major milestone by erecting 775,000 solar panels.

In March 2011, the solar farm was officially dedicated by the Nevada governor, Boulder City mayor, and the president and chief executive officer of Sempra Generation.

Copper Mountain Solar Facility produces emission-free electricity to power almost 14,000 households. It is owned and managed by Sempra Generation, which is a subsidiary of Sampa Energy, San Diego.

The local, state and federal governments will receive $135 million in new revenue from this project during the lifetime of this project.

Also, during the project, nearly 350 construction jobs and five full-time jobs were created.

The solar farm was named ‘Solar Project of the Year’ by Renewable Energy World in March 2011.

Construction of the project began on September 2011, and full commercial operations started in October 2013. The total estimated cost of the project is nearly $1.6 billion.

The solar farm covers approximately 4,700 acres of grazing land in the Carrizo Plain. Overall, solar arrays, facility buildings, and substation comprise 30% of the project site. The remaining land is preserved and used for the conservation of species in the area.

The site of the farm also has an abandoned gypsum mine, which was cleaned up and restored for operations.

The reason for choosing this specific location was due to its flat topography, abundant solar resources, and proximity to existing transmission lines.

The electricity produced by the project is enough to fulfill the annual electricity requirements of almost 100,000 homes.

The CVSR facility requires minimal water for periodic cleanups and has a water recycling plant. It will reduce hazardous greenhouse gas emissions by almost 336,000 tonnes per year.

Also, this solar ranch is likely to contribute nearly $315 million for the economic development of the region. It has created more than 700 jobs during the period of construction.

The construction of the solar ranch was completed on February 20, 2013, and the first 100 MW came online. The total investment on the project was approximately $1.36 billion.

The Antelope Solar Ranch has nearly 3.8 million solar panels. The panels are attached to metal racks, and they do not rise above eight feet from the ground to resist the high wind speed.

The plant has the capacity to provide electricity to almost 75,000 homes.

During the development phase of the project, it created 400 construction jobs and 15 operations and maintenance jobs.

The project will reduce 140,000 tonnes of carbon dioxide emissions per year, and will contribute to California’s goal of generating at least 33% of its electricity from renewable energy sources.

The construction of the project has been in three phases, out of which two phases were completed in 2018. The total capacity of the farm is 594 MW.

The solar farm is spread over 801 hectares of almost barren farmland and has more than 3 million solar modules that rotate on a north-south axis and track the path of the Sun.

During the construction of the project, a technology called “DuraTrack HZ,” has been implemented. It is a durable tracker, which is specifically designed for providing stability and support for frameless thin-film module applications.

When fully operational, this solar farm will be one of the largest single-axis tracker solar power plants in the world.

The generated electricity by the farm is enough to power 72,000 homes in the San Diego Gas & Electric (SDG&E) service territory.

Also, the project will bring down nearly 356,000 tonnes of carbon dioxide annually, which is equal to displacing almost 15 million trees per year.

At the peak construction period, the project created more than 700 direct jobs in the area.

Solar farms are capable of producing solar energy at large-scale. These projects are also ideal for reducing greenhouse gas emissions and creating a significant number of jobs.

Solar farms, however, need a lot of space, and the cost of constructing such huge is quite high. In addition, the maintenance of solar farms is another hassle. In China, an average of 30% of the solar output is wasted due to infrastructure issues.

One of the proposed solutions to deal with the issue is developing super grids that can take energy from solar farms and distribute it to larger metropolitan areas.

Despite some of the mentioned issues, the number of solar farms in the world will grow, and it is a positive sign.

Besides producing a substantial amount of solar energy, these farms will increase the “green zones” in different parts of the world from the environmental perspective by reducing carbon emission in this otherwise polluted planet.