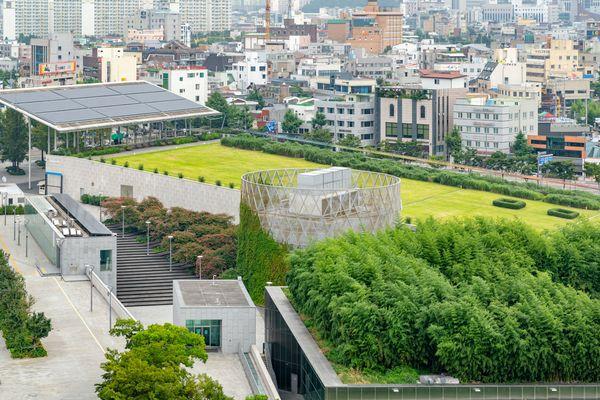 South Korea is an undoubtedly technologically advanced country. As a result, the country’s technological infrastructure is something others ought to model.

Their excellence in the field extends to renewable energy, which shows no slowing down despite the ongoing COVID-19 pandemic. They also plan to boost their renewable energy mix to 20% by 2030 and 42% in 2034. Are these numbers significant? For a country still incorporating renewable energy use, that’s pretty impressive.

Part of that renewable energy shift is solar power. We’ll discuss how South Korea’s been doing in that department by showing some relevant statistics. This article will also share some issues that challenge their solar energy efforts.

​​Even on the solar energy front, the pandemic hasn’t made a dent in South Korea’s renewable energy efforts. The country did not enforce a total lockdown, letting economic activities continue. This move helped increase their renewable capacity while battling the virus.

According to Korean Energy Agency statistics, South Korea launched solar power plants amassing up to 2.82 GW until Q3 of 2021. The government aims to reach 30.8 GW by 2030, which will meet their 20% target of total energy generation through renewables.

The country’s solar energy segment has a bright future ahead of it. South Korea’s installed capacity was 14,575 MW as of 2020. It surpassed 2019’s number, which stopped at 11,952 MW. South Korea’s solar power market is also expected to hit a compound annual growth rate (CAGR) of over 5.5% within the next five years.

In recent news, the South Korea Energy Agency launched the first of two PV tenders planned for the year last June. The agency announced its plan to allocate 2,000 MW across four project categories. These categories include the following:

Specific projects will get a fixed rate under a 20-year contract. This contract will fall under the country’s renewable energy certificate (REC) scheme, which will result in sale of electricity to local power distributors. KEA will prioritize projects relying on solar PV modules with low carbon footprints. The chosen projects will be revealed on August 19, with the final contracts awarded in October.

You can take all these news and numbers as signs of solar power growth in the country, which, judging by the figures, won’t stop anytime soon.

How did the country’s foray into solar energy come about?

South Korea’s history with solar power began during the 1970s. University laboratories were the first home of the country’s research and development of solar PV technology.

This continued well into the 1980s, pushing their efforts on technology development to further national competitiveness. During this decade, the country attempted to diffuse alternative energies around solar thermal and waste energy but didn’t succeed. However, that setback didn’t stop them from pursuing alternative energy further. Progress came in from the Promotion Act on Alternative Energy Development, enacted in 1987. 1988 saw the launch of a full-scale R&D activity to advance PV technology.

As the 1990s rolled in, PV installation in South Korea was quite low (2 MW) due to high costs; the lack of market perception and preparedness also contributed to the low capacity. However, this began to change when the country realized that the progress made by alternative energies emitted by technologies like solar PV devices has potential for commercialization. To this end, the government amended the Promotion Act on Alternative Energy Development to the Promotion Act on Alternative Energy Development, Use, and Supply in December 1997. It was done to build a legal foundation for the diffusion of new and renewable energies (NRE) and further development.

The act was amended again in 2002 to expand its scope to support the mass deployment of renewable energies. The amendment also included support for a Feed-in-Tariff (FIT) mechanism, which the solar PV sector started benefiting from in 2004. As a result, South Korea’s solar PV installations experienced an increase in the following year.

2005 also saw the government suggesting a particular solar PV diffusion plan via the 2nd Basic Plan for New & Renewable Energy Technology Development & Dissemination. By the time the 3rd plan rolled out in 2008, they had worked to include effective NRE deployment into it. In the same year, they also introduced a national plan to reduce carbon and green growth while seeking more growth opportunities via green technology development.

Solar gadgets aren’t a strange sight to see in the country. This is especially true in Seoul. Since the Solar City Seoul project’s 2017 launch, the capital’s efforts to make solar energy a more accessible option continue.

After exceeding their 2019 target of installing 357 MW of solar panels for 285,000 homes, they now aim to increase that number to a million. The project also plans to set up solar PV systems on every municipal site and boost the solar industry by hitting the 1 GW mark on installed solar PV capacity by this year. So don’t be surprised if you see tons of solar-powered houses and public buildings while walking around the Land of the Morning Calm.

Seoul’s other solar energy projects are just as noteworthy too. The city’s solar-powered landmarks hope to follow Freiburg, Germany’s footsteps and become a solar city. As of 2020, the city government is transforming Gwanghwamun Square into a solar street by fitting its benches, trash cans, and lights with solar panels. They also aim to turn Jamsil Hangang Park and World Cup Park into a solar road and square, respectively. In addition, they plan to have the Magok district run on renewables by using solar energy to make the district 30% self-sufficient in the energy department.

Is Seoul the only one all-in with the solar shift? The answer is no. The rest of South Korea isn’t far behind in its efforts.

One example is the Hapcheon Dam in South Gyeongsang province. What look like giant flowers are 92,000 floating solar panels shaped like plum blossoms! Locals requested such an arrangement for added visual appeal. The panels use technology specifically suited for water and greatly resist humidity and heat.

Developments like the Hapcheon Dam panels show that developed nations with land scarcity can contribute to giant renewable energy efforts. MOTIE (Ministry of Trade, Industry, and Energy) Renewable Energy Division officer Choi Jae-hong believes that using water over land for such projects is cost-efficient. In an interview with Bloomberg Law, Choi says that building solar power plants on land is difficult due to the high demand for it for other projects. Choi also reasons they want to build their projects in low-demand locations to avoid wasting resources.

Another impressive breakthrough? Back in September 2021, BlackRock Assets (BRA) poured in a 100 million investment into Brite Energy Partners—a South Korean solar energy company. The company plans to use the investment for building small-scale solar projects in different parts of the country, along with the funding of the acquisition.

If you think it’s impossible to find solar panels in the middle of the road, think again. This 20-mile bike highway generates electricity and protects cyclists from the heat. The highway runs from Daejeon to Sejong and has enough supply to power its electric vehicle charging stations while carrying its lighting system simultaneously. In addition, underground tunnels under the panels provide entry and exit points for cyclists, shielding them from both sunshine and traffic.

South Korea’s increasing environmental awareness plays a huge role in the steady implementation of solar energy. Furthermore, the government’s insistence on upholding the Paris Climate Accords will help this slow and steady transition become more common as the country continues its path towards a cleaner and greener future.

It’s safe to assume that solar energy has made a dent in South Korea. But just how much has it affected the country?

The initiatives and policies mentioned above have positively impacted the South Korean economy. The rise of PV firms helped create many employment opportunities, jumping from 716 to 13,651 jobs from 2004 to 2010. Sales and domestic exports also experienced a significant boost during the same time frame, going from 56 to 71 times. This is because domestic production helped meet increased demands. And because the country created the domestic market for it, South Korea became more capable of exporting PV products from 2008 onwards.

South Korea’s progress in the solar power department is significantly ahead of the solar energy statistics in the Philippines and other neighboring Asian countries. However, it doesn’t come without its challenges.

Fossil fuels are still atop South Korea’s energy mix. Per Korea Energy Economics Institute (KEEI) February 2021 data, it comprises 82.5% of the said mix. Although they plan to shut every coal plant down by 2029, the country still has a 7.3 GW coal-fired power plant in its construction pipeline.

Including solar panels in a “what to sell on Amazon FBA” list is great. However, selling them online can only do so much to speed up a nationwide transition to an alternative energy source. And sadly, South Korea still has a long way to go to embrace solar energy fully.

Former South Korean President Moon Jae In made significant strides in fulfilling ambitious renewable energy plans. Among those accomplishments include the country’s Green New Deal and Emissions Trading Scheme. But, while they’re great, the climb towards a greener nation may be steeper than expected.

The country, unfortunately, remains one of the world’s leading coal importers and carbon producers. In addition, the country also has coal power operations lined up for construction. So as long as they’re committed to coal, they should not be surprised to find themselves on the losing end of the low carbon technology race.

As shocking as it may be, not everyone is on board with going green. People residing in rural areas are against the shift because such projects (especially large-scale ones) threaten their lands and communities. We can’t blame them for their reactions; who wouldn’t feel angry if there’s a presence threatening to ruin their livelihood?

Policymakers have resorted to delaying or rejecting projects due to tensions between communities and energy companies. As of writing, 123 of South Korea’s 226 municipalities have regulations restricting land availability for solar projects.

Challenges aside, solar power in South Korea has a bright future ahead of it. It leads the country’s renewable energy investments, with 2022’s forecast investment amounting to $5.1 billion as of writing.

Local PV module giant Hanwha is currently working on a 63 MW floating plant on Goheung Lake in South Jeolla. The project is expected to provide clean power for 90,000 households.

Another solar floating plant is in the works as well. Only this time, it’s in the North Jeolla province and is under SK Group— the country’s third-largest conglomerate. Ammasing 200 MW, this solar project will use around 2.5 million solar panels and will be South Korea’s biggest floating solar plant. This one lies along the Yellow Sea, constructed inside the Saemangeum seawall. It’s expected to power around 1 million households and reduce the country’s carbon dioxide emissions by 1 million metric tons.

Solar power isn’t a strange energy source in South Korea. The statistics shown above indicate that it has a future in the country. However, the transition and implementation are not smooth processes since they have problems that need addressing.

Feel free to ask questions or raise comments about this post below. We’ll be glad to hear from you.

Jayce is the managing director of Seller Interactive, a company designed to help brands grow their business online. As an expert in content marketing, Jayce has worked with top brands such as GoDaddy and Toyota. Whether you need a hand with Amazon listing optimization service and Amazon PPC management, Jayce is the expert that will get you results.