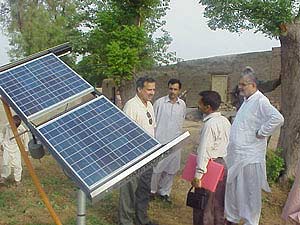 Pakistan is a energy deficit country like most other South Asian countries with inadequate investment  in the electricity sector and the distribution infrastructure. The cause of the energy crisis in the country is due to massive corruption and misgovernance, a theme which will be familiar to  citizens of India as well.

Pakistan has been looking at investments from the Chinese power companies in the hydro and wind sectors to boost electricity generation. However these investments take time and some may never come to fruition. That being said, Pakistanis are now turning towards cheap Chinese solar panels to beat the high electricity tariffs and dependence on expensive diesel generators and UPS systems.

Note Diesel is not only expensive but also environmentally very harmful. UPS which is generally made of lead acid batteries is not great either with short lives and maintainability problems. Small Cheap solar panels enough to power a couple of lights and fans can be now be bought with small investments of $400-500 which is within reach of most citizens.Though problems exist such as cartelization and corruption in buying solar panels, it still is becoming a feasible economic alternative to fossil fuel sourcs.

Importers of solar energy panels told The Express Tribune that unbearable energy outages, high tariffs and heavy expenses on generators and Uninterruptible Power Supply (UPS) had left consumers with no option but to turn to alternative energy, particularly solar panels. They said Chinese solar panels were much cheaper compared to panels imported from Germany which were very expensive and did not come within the range of consumers.

In a bid to promote alternative energy, the government has scrapped duty on import of solar energy systems. Khawaja Cotton Industries Chief Executive Officer Muhammad Amjad Khawaja said he invested Rs5 million to install solar water boilers, but after this the gas bill dropped 40 per cent. He also installed solar energy panels at his home at a cost of Rs90,000 and his electricity bill fell almost 60 per cent.

I have always predicted that solar energy growth has been vastly underestimated by analysts and policymakers.The fact that it is already starting to compete with fossil fuel sources in third world countries shows the massive growth potential.

Solar Energy is currently the amongst the costliest form of energy generation and except in niche applications is not economic without some sort of government subsidies. However growth in solar energy has been one of the fastest in the past decade upwards of 50% CAGR as costs have declined and technology improved manifold.

Solar Energy forms just 0.1% of the the total energy supply of the planet currently and analysts and decision makers don’t think that Solar Energy can form a big chunk in the future as well. However I differ strongly in that aspect. The main reason for my very bullish opinion on Solar Energy is based on the simple fact that Solar Energy is the only form of Energy whose costs are declining rapidly on a secular basis.

In a world facing the prospects of “peak commodity”, solar energy remains vastly abundant and it remains up to human technology to capture it at the lowest costs.

**Abhishek Shah is a computer engineer (NIT Warangal) and MBA (IIM Calcutta) by education with interests in technology, renewable energy and finance. He also writes about globalization, poverty, income inequality, corruption, and macroeconomics.  By day, Abhishek works as an analyst with a green and technology focused investment fund.
Solar Energy In Pakistan Gets Competitive originally appeared in Green Chip Stocks. Green Chip Review is a free 2x-per-week newsletter, is the first advisory to focus exclusively on investments in alternative and renewable energies.