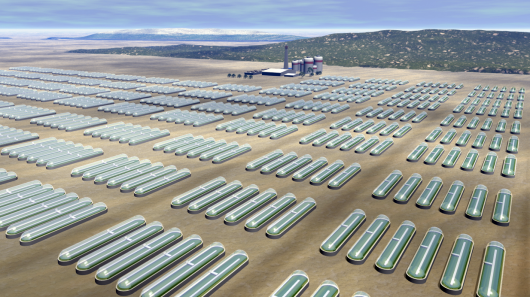 Researchers at the University of Colorado, Boulder (CU-Boulder) have dreamed up a radical approach to mainstreaming hydrogen fuel production.

Hydrogen could be the ultimate clean energy source for powering cars and homes, but the costs associated with it are still enormous.

CU-Boulder’s idea is far away from commercial viability, but it is intriguing. The scientists propose using a massive solar-thermal system to drive the chemical reaction, simplifying the process of splitting water into its primary components, oxygen and hydrogen.

“We have designed something here that is very different from other methods and frankly something that nobody thought was possible before,” says CU-Boulder Professor Alan Weimer, research group leader, and a member of the university’s chemical and biological engineering department. “Splitting water with sunlight is the Holy Grail of a sustainable hydrogen economy.”

The design (pictured below) uses an elaborate system of mirrors to concentrate solar energy onto a point at the top of a central tower several hundred feet tall, heating it to temperatures as high as 2,500 degrees Fahrenheit.

The tower acts as a conduit, redirecting the heat into a reactor chamber filled with metal oxides – a combination of iron, cobalt, aluminum and oxygen. This, in turn, causes a chemical reaction that releases the oxygen from the compound.

The next step involves the “addition of steam to the system — which could be produced by boiling water in the reactor with the concentrated sunlight beamed to the tower — it would cause oxygen from the water molecules to adhere to the surface of the metal oxide, freeing up hydrogen molecules for collection as hydrogen gas,” the team notes.

One big difference between CU-Boulder’s approach and conventional methods is that both reactions can happen at the same temperature, which saves considerable time, say the researchers.

“The conventional approaches require the control of both the switching of the temperature in the reactor from a hot to a cool state and the introduction of steam into the system,” says Charles Musgrave, an associate professor who is part of the research team. “One of the big innovations in our system is that there is no swing in the temperature. The whole process is driven by either turning a steam valve on or off.”

The amount of hydrogen produced for fuel cells or for energy storage would depend on the amount of metal oxides used, the number of working towers designed into the solar-thermal system, and how much steam is introduced, says the research team.

Weimer is also the executive director of the Colorado Center for Biorefining and Biofuels (B2B2), an arm of the Colorado Energy Research Collaboratory that works with industry and public agencies to commercial renewable energy technologies.

CU-Boulder’s research is supported by the National Science Foundation and the US Department of Energy.