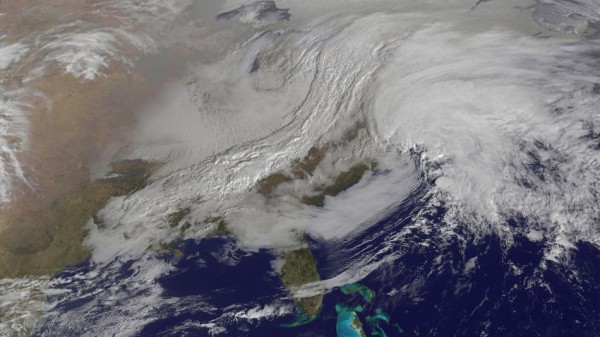 Those living in the Northeast of the United States are well aware that Snowstorm Nemo (What’s with all these silly names?!) is looming and after the devastation of Hurricane Sandy, everyone is scrambling to make sure they are prepared for the worst.

Extreme weather always opens the door for a candid conversation on whether our weather is Mother Nature’s will or a by product of climate change. And rightfully so: Data shows that the quantity of rain or snow that falls in the top one percent of the heaviest storms has risen nearly 20 percent.

Fortunately, the scientists with The Union of Concerned Scientists have shared an informative breakdown on the correlation between the winter storm and the planet’s changing climate. And their verdict, is clear:

NASA and NOAA plus research centers around the world track the global average temperature, and all conclude that Earth is warming. In fact, the past decade has been found to be the hottest since scientists started recording reliable data in the 1880s. These rising temperatures are caused primarily by an increase of heat-trapping emissions in the atmosphere created when we burn coal, oil, and gas to generate electricity, drive our cars, and fuel our businesses. Hotter air around the globe causes more water evaporation, which fuels heavier precipitation in the form of more intense rain and snow storms.

At the same time, because less of a region’s precipitation is falling in light storms and more of it in heavy storms, the risks of drought and wildfire are also greater. Ironically, higher air temperatures tend to produce intense drought periods punctuated by heavy floods, often in the same region.

These kinds of disasters may become a normal pattern in our everyday weather as levels of heat-trapping gases in the atmosphere continue to rise.

UCS climate scientist Brenda Ekwurzel explains, in an emailed statement to The Huffington Post, that:

Rising ocean surface temperatures already have increased the temperature and moisture content of the air passing over the United States, setting the stage for heavier snow and rain storms. Global warming has increased the risk of dumping heavier precipitation — as rain or snow — over most land regions that experience storms.In the U.S., the region that has experienced the highest increase in heaviest precipitation is the Northeast over the last half century. According to NOAA, the Northeast saw a 74 percent increase in the amount of precipitation that fell during the heaviest rain and snow events between 1958 and 2011.

“The choices we make today can help determine what our climate will be like in the future,” the scientists write. “Putting a limit on heat-trapping emissions, encouraging the use of healthier, cleaner energy technologies, and increasing our energy efficiency are all ways to help us to avert the worst potential consequences of global warming, no matter what the season.”