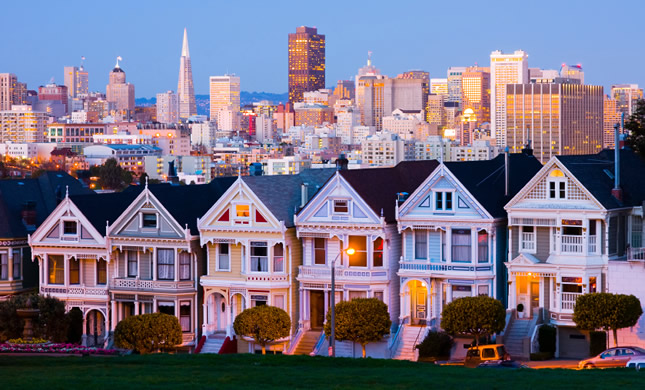 San Francisco says it is closing in on the goals of its 2004.

Climate Action Plan and released its strategy to meet the more stringent goals it set for 2025.

This “shows that it is possible to reduce the harmful emissions that cause climate change at a citywide scale,” says the website, providing a model for other cities to follow.

As of 2010, the City has cut greenhouse gas (GHG) emissions 14.5% below 1990 levels across the building, energy, transportation and waste sectors, even as it has expanded its economy (measured by gross domestic product) 40% and its population by 11%.

Indeed, electricity demand went up 11% from 1990-2010, but GHG emissions from buildings still went down because of the decreasing carbon intensity of the electric grid.

The city’s new downtown regional transit hub, which is under construction, will be topped by a green roof that has bicycle and walking paths, a playground, café, a cultural center and a 1000-person amphitheater: 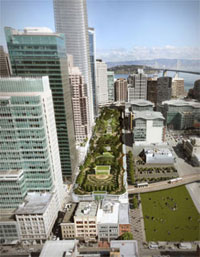 Part of the reason for this progress is that San Francisco took on the challenge of addressing climate change early, back in 1996, when it released its first Sustainability Plan. By 2002, the state of California had its Renewable Energy Portfolio Standard, and the city was among the first to require its 60-plus city agencies to develop and track Departmental Climate Action Plans. Agencies track vehicle and building energy use, water use, waste disposal and purchasing.

Also in 2002, San Francisco set the goal of achieving zero waste by 2020, with an intermediate goal of 70% by 2010. As part of its commitment to the US Conference of Mayors, it developed the 2004 Climate Action Plan. Also, two dirty power plants have been closed.

The city also plans to expand forest cover to 25% of its land area.

And it is one of 10 cities to announce it is divesting from all fossil fuel investments. Another great initiative is CleantechSF, which is supporting growth of the cleantech industry.

San Francisco is part of the growing coalition of cities worldwide that are fighting climate change on the local level in the absence of federal action. Known as the C40 Cities Climate Leadership Group, the largest 40 cities in the world are members.