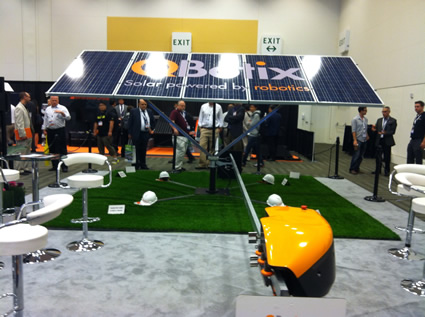 Last week was Intersolar North America 2013 (IS for short) in San Francisco and we were there – here is our first take on who was Hot and who was oh, so, not at the show (and Recom, we mean you).

Any time you come to a tradeshow – whether IS or SPI – part of the task in reporting back is to get a gestalt for the show as a whole.  One sense of that comes from raw numbers – we were told that the number of exhibitors was roughly half of the all time high, dropping from nearly 1,300 to less than 600 at this event.  And certainly there were some major players missing in action such as module makers LG Electronics and SunPower, and microinverter king, Enphase Energy.  (We understand that it has always been their strategy to pass on IS as “too local” in favor of SPI – but the rumor is that they will be passing on a booth at SPI this year as well!)  Of course, Enphase proved that it is possible to make a splash at a show without a booth (see below) but we wonder if this is the start of a trend toward major downsizing of these events?

Aside from the numbers, here was our gut-check on the expansiveness of the show – where were all the bags?  In years past it seemed that every major booth was giving out branded shopping bags that attendees could use to gather info from all of the other booths (and to carry home groceries thereafter!).  This year – no bags, other than the clumsy paper version provided by IS when you registered.  Without a proper bag we kept our acquisitions to a minimum – I kept one handout, from storage system manufacturer Stem (more on that in a later post) and lots of business cards.  Meaning my flight home was the lightest ever.

In many ways, Enphase Energy was the star of this show.  Not only did they utilize the posh, Four Seasons Hotel to roll out their 4th Generation microinverter product along with some very cool upgrades to their Enlighten data visualization service (about which we will devote an entire post later in the week) but they also played host to two of the major events at IS – all the while not staffing a booth on the exhibit floor.

The IS Tweetup – hosted by Tor Valenza (aka SolarFred) and co-sponsored by Enphase and Solar Power World – was a huge hit.  The room was packed and we were able to see lots of old friends, connect with some new ones whom we had only known via social media previously, and have a very tasty meal. [Shoutouts to Nick Carter (who runs a cool site devoted to our favorite synthesis of EV & PV), Jon Semingson (of MRI Network) and Adam Gerza (who has the awesome gig of being a solar guy charged with directing governmental affairs for Sullivan Solar Power).]

Then Tuesday evening, Enphase was one of the hosts at the annual Summer Solarfest party.  Again, this is one of those events where lots of networking takes place and people exchange catch-up information – like who has gone where and other fun rumors.

We were able to talk with a number of Enphase folks during both of these events and it really helped to have a greater understanding of the company’s strategy going forward.  And then, just like that, they were gone!

We suspect more companies are going to adopt this approach – eschew the booth in favor of more closely targeted events where you can connect with the people you most want to during the show opportunity.  While there is certainly more bang for the buck from that approach – and no doubt that matters a lot to a recently gone public company still trying to reach profitability – but there is the downside of not making that serendipitous connection.  Given that we got hooked on Enphase by just such an occurrence at a small data monitoring conference years ago, we would hate to see those opportunities slip away.

While the exhibit floor was definitely not as Hot as in years gone by, there was another floor that was as Hot as ever – and that was the one found at the annual Solar Battle of the Bands.  Thanks to a miracle ducat from the folks at Quick Mount PV – shoutout to Ron Jones – we were able to attend this year’s sold-out event.  The action ranged from way cool blues…

…to the hottest of the hot!

The crowd loved it!

Great to see industry folks hang out a bit and enjoy the many talented people in this biz.

How Cool is This?

As you walk the floor a common question that colleagues ask each other is – what is the coolest thing you have seen on the floor?  When a show covers so much floor space – module makers on the first floor, inverters on the second and racking/BoS folks on the third – it is easy to overlook something.  Well we found what was the coolest thing at the show, hands down – the folks from QBotix – Solar Powered by Robotics.

Imagine a utility-scale array of dual axis trackers.  Lots of motors and controllers out in the field to wear out over time – big expense to install and maintain.  If you were going to come up with a different solution and were willing to go way outside the box, what might you dream up?

The QBotix solution is to get rid of the motors and electronics on the trackers themselves – leaving only a series of sealed gears connected to flanges on the base.  Now introduce a robot – that yellow device on the rail in our picture – and program it to follow that rail from tracker to tracker throughout the array.  When it arrives at one it stops, engages the gear box flanges and spins them, repositioning the array for that time slice.  Then on it goes to the next, repeating that process, until every tracker in the array has been adjusted.  It then parks itself (where it recharges!) and then repeats the process so that the array is re-aligned every 45 minutes.  Now how cool is that?

So far the company only has a couple of relatively small test installations.  But their booth was the hit of the show, always with lots of folks standing in awe at the creativity behind this concept.  We don’t know if this will ultimately prove to be a viable solution to the dual axis tracking problem, but we certainly do salute their innovative approach.  We will keep an eye on these folks going forward.  Nicely done!

Besides trying to track down what is cool, the other question that folks ask while wandering the floor is what is the worst thing you have seen.  Alas, that is a question worth asking given the pattern of seeing tacky, outright sexist displays that are passed off as marketing.  That pattern plunged to new depths this year when the geniuses at Recom – a module manufacturer headquartered in Greece – came up with the brilliant idea of putting women in cages to advertise their products.  Seriously.

(Apparently this was Recom doing it on the cheap – in Munich their cage wasn’t just simulated with cheesy looking bars, it was a much more complete cage elevated above the show floor.)

So what is the connection between solar modules and women in cages?  Besides none, of course? Apparently their modules are named after a Leopard and a Panther so the obvious marketing choice is to highlight those products by putting women wearing torn clothing in cages.  Obvious, that is, if you are a sexist idiot with the maturity of a high school sophomore boy – with apologies to sophomore boys everywhere.

Lest you think this was just a momentary lapse in judgment, there is this from their website (which no, I’m not linking to):

The most elegant girls welcome you to the Recom experience.  See the most extravagant booths, listen to the best music and join us in a place where reality become unreal.  You can’t miss us from every large international industry trade fair around the world. Come and admire the innovative approach to our booth design, unique to each fair.

Seriously.  Who the hell are these guys?

Well, thanks to LinkedIn we were actually able to track down their Managing Director, Hamlet Tunyan.  You can email him at: [email protected] and let him know what you think of his sexism pretending to be marketing.  I hope his mailbox melts down.

That’s it for this slice of IS – next up will be the poseurs and the player in the solar storage debate.