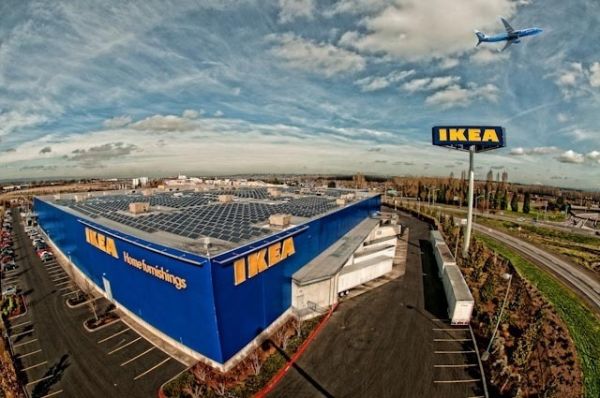 It’s a bright week for the solar industry when two major retail chains announce their support of solar energy initiatives, so much so that they’re winning awards and setting new solar records! The international home products company IKEA recently reported its fourth solar PV installation in just one week, more than the store has ever achieved in the past. The mecca of easy-to-assemble living is aiming to have solar energy powering 89 percent of its stores by year’s end. With four locations come online within days of each other, that’s certainly a reachable goal.

Meanwhile, earlier this summer, Kohl’s department stores announced that it will be increasing its solar energy output by 25 percent, adding solar panels to 30 of its stores nationwide. What many may not know is that Kohl’s is currently the nation’s retail store leader in renewable energy purchases, buying 1.5 billion kilowatt hours of power per year. These come from more than 150 solar PV installations across 13 states. Each installation provides 20 to 50 percent of that store’s energy, according to reports.

This total output is more than double second-place Wal-mart, and well ahead of IKEA. But with only 39 stores nationwide, IKEA has far less ground (er, roof space) to cover before it can declare itself 100 percent solar- and wind-powered. (Wind turbines provide renewable energy in many of IKEA’s international locations.)

IKEA, too, practices sustainability in all of its locations, including the use of sustainable cotton and certified wood in many of its products. Initiatives in 2011 increased energy efficiency in IKEA stores through upgrades heating, ventilation, air conditioning,and lighting systems.

Solar & Sustainability Go Hand in Hand
We’ve often said that solar is just one piece of the sustainability puzzle. Whether energy efficiency or solar comes first, it doesn’t matter. Like these retail giants, it usually takes one small step. Your solar installation, originally pursued to save money, may lead to eco-consciousness in your household. Or maybe you want solar because it’s the right thing to do for the planet and those lower electric bills are the bonus. Either way, solar and sustainability work best hand in hand.

In reports, both IKEA and Kohl’s acknowledged the money-saving benefits as well as the global importance of solar power and energy efficiency. The Internet has been abuzz with this good news, which can only help national solar outreach efforts. As passionate solar advocates and those who are always solar-curious, we can only hope other companies see what these industry leaders already recognize. If we have to look at strip malls, we’d love to see aerial views of their rooftops populated with solar PV panels. And, as solar becomes commonplace in retail arenas, more and more homeowners will recognize the benefits as well.

So, who will win the retail solar race? We can’t guess, but it will be fun to find out! If large companies can save on a large scale with a solar PV installation (we’re talking savings of hundreds of thousands of dollars), imagine what a difference cutting $100 or so off an electric bill can do for families who just wish they had a little bit more money left over at the end of the month?!