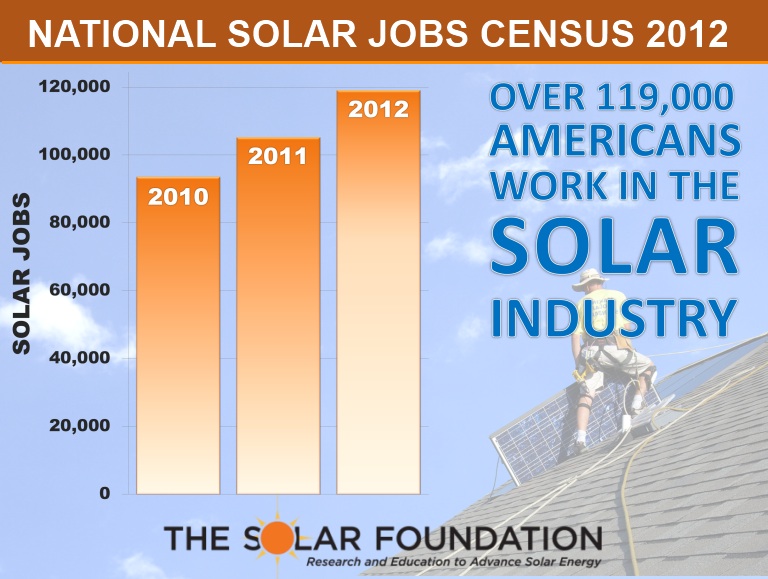 The U.S. solar energy industry is outpacing the job growth in all areas of the economy, according to non-profit group the Solar Foundation. The organization reported that the solar energy field added jobs at about eight times the rate of the rest of the economy in the 12 months (September 2011 to 2012). Nearly 14,000 solar workers were added, boosting the solar workforce by 13.2 percent, asserted this Washington-based non-profit organization. The employment growth rate in the total economy was 2.3 percent in the same period, as reported by the U.S. Bureau of Labor Statistics.

“The solar industry has grown at significantly higher rates than most other industries in the past several years, making it one of the foremost creators of new jobs in the United States,” said Andrea Luecke, The Solar Foundation Executive Director. “These new solar industry jobs are sustainable, cannot be outsourced and play a critical role in our country’s economic recovery.”

Falling solar equipment prices is cited as the primary driver of jobs growth in this solar energy field. Solar panel prices have dropped 29 percent from October 2011 to October 2012.

With the staggering drop in price for solar panels and equipment and the robust (and growing) workforce, does that mean that solar energy is anticipated to become a leading source of energy for American citizens? With these internal and external economic factors on solar’s side, the answer is clearly: YES. In fact, U.S. developers will install around 3,300 megawatts of solar panels this year, nearly double the amount installed in 2011, according to a study released by the Solar Energy Industries Association and GTM Research.

Higher production rates, more panel installation, and a growing workforce…. The future of solar is looking brighter than ever.