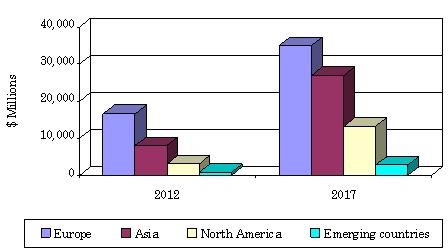 I’m happy to announce the publication of my most recent report, Global Markets and Technologies for Photovoltaic Systems, by the research company BCC Research.

You won’t be finding it in your local bookstore–the purchase price is $4,850, although you can get bite sized chunks at a much lower price. The report has actually been in the post-production process for some months, now and I felt it useful to sit down and read what I had written.

If the caveats I put in the report are included, it stands up pretty well. The photovoltaic industry has been in a dramatic state of turmoil, and I was a little concerned that my report would have been out of date on the date of publication–something I included in the report.

My short summary of the contents would probably be “The global market for photovoltaics will see five years of strong growth, but that growth will be profitless for almost all involved in the industry.” One thesis I advance is that it’s time for the rest of the logistical chain in PV to work as hard at lowering prices as module makers and polysilicon producers have over the past few years. There is still low-hanging fruit in shortening and lowering the cost of installation, permitting and some elements of the balance of systems.

Here’s what BCC chose to write about the report: Modern PV technology dates back to the 1950s and the advent of the space program in the 1960s, but the concerted effort to develop this technology for industry and consumer use began during the oil embargoes of the 1970s.  However, the eventual stabilization of oil prices had a dampening effect on investment, tax credits and government funding for research and development.

Companies in the PV business have focused on reaching grid parity—where electricity generated by solar power is equal to or below the cost of electricity from competing sources—as a way to broaden the scope of PV.  Nations and individual states began to offer serious incentives such as tariffs and tax credits for solar customers.  Consequently, we were interested in looking at this industry once again to chart its potential.

Since 1978, the installed cost of solar electricity has charted a downward path strongly reminiscent of declines in the cost/performance ratios found for computer memory and MIPS (million instructions per second, a common metric for performance in the computer industry).  From $5/kwh in 1978, the cost of electricity generated by solar power has dropped to $0.20/kwh in 2010.  A simple extension of this curve would bring the cost of electricity delivered by solar sources to parity with other generating sources by 2015.  Although few believe the performance of solar power improvements can match the dramatic improvements in computer technology, it has only to continue for three more years to make an impact on the marketplace. A lot is riding on the short-term performance of solar power and many are keenly interested in the results.