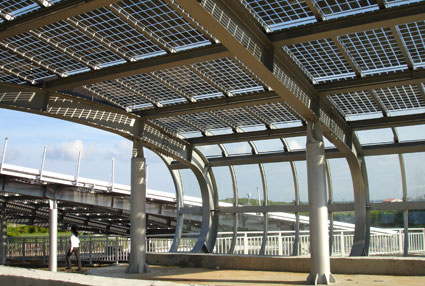 Building-integrated solar is expected to more than triple in dollar volume between now and 2015, according to a new report from NanoMarkets.

The research company, based in Virginia, released a report this week that reveals projections for BIPV to grow from a $2.1 billion industry to a $7.5 billion industry over the next two years.

“Of course it’s going to grow really fast,” said analyst Lawrence Gasman. “Anything that’s at virtually zero now and it’s new, unless it’s a total flop, is going to grow quite quickly.”

He said building-integrated photovoltaics make up about 1 or 2 percent of solar shipments right now. “We’ve forecast that to grow to 15 percent by 2019,” he said.

The trick, however, is defining building-integrated solar.

There is a move toward beautifying solar now, Gasman said. A lot of companies are taking traditional solar photovoltaic solar panels or cells and incorporating them into glass ceilings or walls. But that’s not true integration, at least not from the level a semiconductor expert would understand, Gasman said.

“You could get into a real philosophical discussion about what real integration is,” he said. To Gasman, true integration is like a combined printer fax machine, copier and scanner.

“We could sit her all day and not decide which of those things it really is,” he said. But solar probably won’t reach that level of integration on most fronts for some time to come.

In most cases, building-integrated solar is a glass wall with a solar panel in it or a window with solar cells on it or solar panels built into the side of a building.

“The closest thing to true integration right now, I think, is Dow Chemical’s solar shingle,” he said. “It’s a shingle and a solar panel.”

Gasman said he expects and the report shows that the growth in the building-integrated PV market will largely come at the expense of traditional solar installations.

There will be some adopters who wouldn’t have installed solar before who will do it now because they can do it without detracting aesthetically from their homes or buildings.

But most of the people who install building-integrated solar would have installed solar anyway, Gasman said, they’ll just be opting for the more attractive option instead of traditional solar panels.