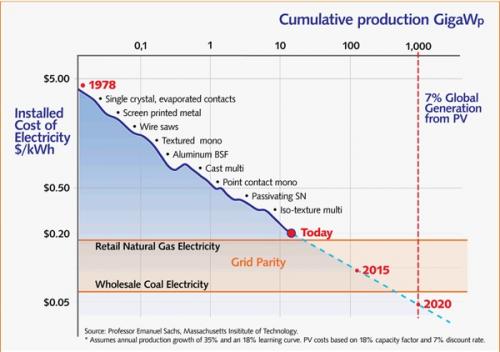 Renewable energy is surpassing fossil fuels for the first time in new power-plant investments, shaking off setbacks from the financial crisis….

Last week, Bloomberg New Energy Finance reported that renewable energy investments are projected to double over the next eight years and reach $395 billion per year.  No, that isn’t enough to stabilize emissions and control climate change, according to the International Energy Agency.  But it is still very impressive.

The renewables boom, spurred by about $66 billion of subsidies last year, intensified competition between wind- turbine and solar-panel manufacturers, gutting margins from the biggest producers led by Vestas Wind Systems A/S and First Solar Inc. The 95-member WilderHill New Energy Index of renewable- energy stocks has tumbled 40 percent this year, steeper than the 14 percent drop in the MSCI World Index….

The wind-energy industry is now more focused on the “sometimes bewildering variety of domestic and regional policies” than on the UN negotiations as a source of impetus for growth, said Steve Sawyer, secretary-general of the Brussels-based Global Wind Energy Council.

As well as renewables spending exceeding that on new fossil plants, last year also was the first time expenditure in developing countries, mainly China, exceeded that in the industrialized world, Sawyer said, predicting both trends will continue.

Wind operators are likely to install 43 gigawatts of generating capacity this year and 48 gigawatts next year, up from 36 gigawatts in 2010, GWEC estimates.

And this is all happening without a price for global warming pollution or fossil fuels  that reflect their very real harm to humans (see Economics Stunner: “Oil and Coal-Fired Power Plants Have Air Pollution Damages Larger Than Their Value Added”; Natural Gas Damage Larger Than Its Value Added For Even Low CO2 Prices).

So the tragedy is that if we were even halfway serious about averting catastrophic global warming, we could deploy carbon free technology at a much faster rate and give the next generation fighting chance