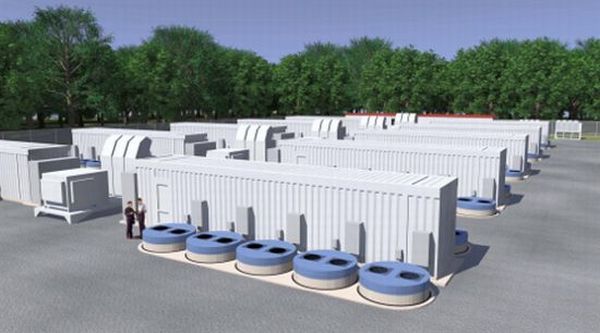 Storage of renewable energy is one of the biggest issues facing us today. Below are 5 of the most innovative technologies developed to solve this problem.

The compressed air energy storage system is one of the widely used systems to store the excess energy produced by renewable sources. This latest technology is being used on wide scale to harness energy from renewable energy sources. It brings out a situation where large amount of renewable energy can be stored into it and can be used later for efficient purposes. The drawback of this technology is that it cannot store energy in the form of electrical energy and it should be converted to some other form so that it can be stored. This brings out remarkably large efficiency losses and is claimed as a non-economically viable solution. The basic compressed air energy storage works on the principle that excess power present on the grid powers an electric motor which is used to drive the compressor.

Beacon Power has come up with a unique and awesome concept to store and harness the renewable energy at a large scale. They have constructed a few arrays of flywheels which are capable of storing energy. This kind of storing in flywheels is nothing new but the company claims that this new technology is being implemented with carbon fiber as well. These flywheels can store up to 2-3% of generated energy. The company have started building more such flywheels and aims at reaching a number of 200 for its new plant. Each flywheel used here weighs 2000 pounds and spins at 16,000 rpm.

New technologies and new ways of harnessing energy are developed every day and this is one such unique way of storing and harnessing renewable energy. This Concentrating Solar Power (CSP) plant is the world’s first power plant which makes use of molten salts. Also the plant is the first ever plant which is completely integrated with combined-cycle gas power plant. It uses molten salts for the heat transfer and storage purpose. This power plant is named ‘Archimede’ which is located in Priolo Gargallo (Sicily). These molten salts can be operated at really high temperatures in the range of 500-600°C and can be operated for long hours as they offer much higher durability. It does not require oil or any such component to harness energy. The company says that Italy can host 3-5,000 MW of CSP plants by 2020. This has inspired other nations and people across the globe have started going for this new efficient technology.

Hydrogen is considered to be a highly useful source of producing renewable energy as it offers energy at very low prices. Nowadays people have started using various techniques to store the hydrogen for fuel-cell cars. This technique was developed by the researchers at the Northwestern University in Evanston, Illinois. They have come out with ways of storing hydrogen and one of them is to freeze the gas around -250 degrees and them transform it into liquid form and then store it into molecular cages. This method has come out to be the best method until now and researches at the same university are finding more efficient ways of storing hydrogen. Moreover, the materials used to make this cage are easily available and hence are cheap. The material cage occupies space about 1300sqm.

This new and unique way of storing energy named Cryo-Energy system is developed by a Britain based company Highview Power Storage. As the non-conventional form of energy production is gaining more importance these days, the company has unveiled its latest technology to harness and store energy. The engineers of the company tried to mange liquefied air to store the energy and the results were shocking. The liquefied air worked out and stored some amount of energy on the first run. This process uses cryogenic techniques to bring down the temperature of natural air and the cool it down to use it as a power storage medium. The natural air is liquefied at temperature of 190 degrees and then is cooled down to store energy. The disadvantage here is that the electrical energy cannot be stored for a long period and hence should be used in a given period of time. The system can save up to $3000/kW of power capacity which is substantial.