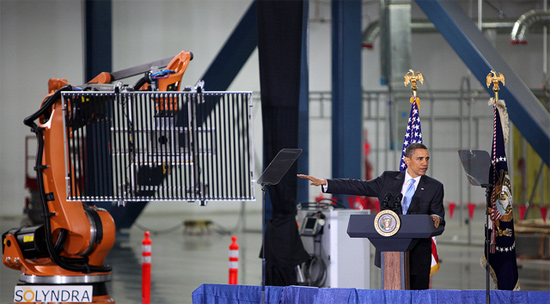 Since President Obama entered office three years ago, renewable energy production in the US has climbed 26.9%, according to the Energy Information Agency’s (EIA) latest “Monthly Energy Review.”

Last February, President Obama issued a Presidential Memorandum ordering federal agencies to develop guidelines for 100% purchasing of alternative fueled passenger vehicles and light-duty trucks by 2015. It’s part of his plan for getting a million electric cars on the road by then to wean the US off fossil fuel and address climate change.

But so far, it isn’t working. Instead of buying hybrids and electric cars, they’re buying “flex fuel” cars that can run on E85 – 85% ethanol and 15% gasoline. Flex Fuel vehicles are included in the definition of “alternative fueled” vehicles.

Automakers have used that trick for years – to meet standards that require higher fuel economy, they made more cars “flex fuel,” which costs practically nothing compared to manufacturing advanced vehicles.

Since there are only about 2500 flex fuel pumps in the US, they don’t fill up with E85, they fill up with regular old gasoline.

In 2011, the U.S. General Services Administration (GSA) bought 32,000 flex-fuel vehicles and only 2645 hybrid or electric vehicles. Although it doubled its purchases of hybrids and EVs in 2010, that declined 59% in 2011, and accounted for just 5% of vehicle purchases.

In 2010, the Recovery Act set aside $300 million for government purchase of advanced vehicles.

The GSA says hybrids and electrics aren’t widely available and are more expensive, so they’re buying fuel efficient conventional cars. They point out there are only about 6000 charging stations for electric cars.

88% of GSA’s fleet – about a third of all federal vehicles – are E85. And those vehicles tend to be SUVs and trucks that get less than 20 miles per gallon!

According to a GSA spokesperson, “Each year, we have procured thousands of fuel-efficient vehicles to replace older, less-efficient ones. Over the last three years, GSA procured vehicles that were on average 23 percent more fuel-efficient than the vehicles they replaced,” Adam Elkington told Bloomberg.