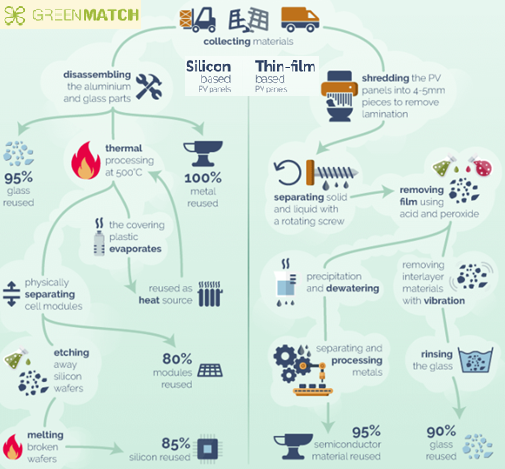 Due to the catastrophic consequences of using fossil fuels, renewable sources of energy, especially solar energy, have drawn the attention of engineers, policymakers, and governments.

The total solar energy that continuously strikes our planet is around 173,000 terawatts (trillions of watts), 10,000 times the world’s total energy use.

Unfortunately, there are many obstacles in the way of transitioning towards 100% renewable energy supply. For example, solar cells’ recycling problems can be mentioned as a serious concern.

In this article, I will deeply discuss the recycling problems with PV cells, explaining the theory and technology of manufacturing solar cells.

First, it is good to review the advantages and disadvantages of solar cells to better understand the perspective of recycling problems among all the other aspects.

Here are several advantages of using solar cells compared to other energy technologies:

This might be the most common fact about PV cells that use solar energy as a clean, green, and widely available source of energy.

Solar power can be used almost by everyone on their rooftop, as opposed to many renewable energies like hydro-power or wind energy. Your independence from the grid will increase, and you can even think about ‎converting your home into a Net-Zero energy building and avoid paying utility costs.

Not only do fossil fuels pollute the environment, but they also need a considerable amount of budget for discovery, extraction, and transportation. PV cells, on the other hand, do not require these costs.‎

While other power plants need suitable lands, PV cells can be installed everywhere to decrease the initial cost.

Now that you know the main advantages of using solar cells, let’s consider some drawbacks of this growing technology.

The initial cost of obtaining and installing a solar PV system is relatively high. When you want to use solar power, you need to buy PV panels, an inverter, batteries, wiring and think about the installation process.

Another weakness of solar energy systems is that they can’t work efficiently in every condition. For example, they can’t generate electricity at night. Moreover, their efficiency will significantly drop in cloudy and rainy conditions.

Since solar energy is not available at night, you need to use batteries to store the energy and use it when it is required. Unfortunately, these batteries are expensive, making the use of solar power even more difficult.

Although solar cells use clean energy and do not release any pollution to the atmosphere, some toxic materials are used during their manufacturing process, affecting the environment. Moreover, solar cells leave toxic remaining after their life-cycle, which need to be recycled.

As mentioned earlier, solar cells might be toxic. Unfortunately, the problem of solar cell disposal is rapidly growing. So it is expected to become an appalling environmental issue within the next two or three decades.

To understand solar cells’ performance and how they work, we need to review the manufacturing process of PV cells.

Theory and technology of solar cells

Photovoltaics (aka PV) is a process that allows us to directly convert the sun’s light into electricity using semiconductors such as Si and Ge.

A solar cell works based on the photovoltaic phenomenon. It is the most common technology among a wide range of solar energy systems such as solar collectors, thermo-photovoltaic systems, solar chimneys, solar-driven drones, molten salt power plants, and artificial photosynthesis.

PV is becoming the most cost-effective means of electricity generation in countries with high solar irradiation. Fortunately, the cost of the manufacturing process of solar cells is gradually decreasing, so its future is promising.

Here is a summary of the manufacturing process of a typical Silicon solar cell:

Why is recycling required?

As photovoltaic technology is growing, a new concern over End-of-life (EOL) solar panels is emerging. Global installed PV capacity reached around 633.7 GW at the end of 2019 and is anticipated to increase to 4500 GW by 2050.

Due to various reasons, solar cells are broken after a while, and subsequently, several toxic materials in the modules, like Cd, Pb, and Cr, will be released into the environment and cause serious problems. Here are the main reasons for solar panels failure, based on Energy Strategy Reviews 27 (2020) 100431:

If the average lifetime of solar panels is considered 25 years, the worldwide solar cell waste can be estimated to reach up to 78 billion kg by 2050.

Thin-film materials ‎have great performance and potential for further advances. With significant growth from 40 GW in 2013 to 500 in 2020, thin-film technology can be regarded as the fastest growing market among renewable systems.

Therefore, we cannot give up using this technology. We should take care of these materials and think of a systematic recycling system to avoid environmental issues in the future. But unfortunately, due to the lack of concrete regulation, only around 10% of PV modules in the world are recycled. For example, there is only one PV recycling plant in Europe, and this is even worse in other continents.

Here is a figure showing the position of the recycling process in the life cycle assessment of a typical solar cell system:

Now it’s good to look at different technologies for recycling solar cells. In fact, the recycling process, the cost of technologies, and the materials used in solar cells play a significant role in the percentage of recycled PV cells.

For example, the recycling process of silicon-based panels includes disassembling the panels to Aluminum and glass components, melting broken wafers in the Czochralski process, manufacturing new silicon cells using new wafers, and final packaging. This process results in a recycling rate of 85%.

Here is a good demonstration of different layers of used solar cells that need to be taken care of when recycling.

A more detailed recycling process of silicon cells compared to thin-film cells has been shown in the figure:

Some experts believe that the cost of the recycling process of silicon-based solar cells with the current technologies is so high that the landfill option is of more interest to many decision-makers.

Generally, three different processes are applied to solar PV panels to recycling them.

First, panels need to be dismantled part by part. You need to remove the surrounded Aluminum frame, the junction box, and also embedded cables. The panel, junction-box, and cables will then be shredded and tested to find the amount of toxicity for disposal.

An important part of the physical process of recycling solar panels is the frame of the panels. It is the last component that should be attached to the module, and plays a bonding role, and seals the module edges from the environment.

Also, the panel’s mechanical strength is mainly dependent on its frame, so the frame is of paramount importance in the duration of panels.

Here is a schematic diagram of a typical experimental set-up for thermal treatment used for separating silicon from other waste materials:

Many researchers have studied different problems of this process when separating silicon from damaged PV modules. For example, researchers at the Italian National Agency for New Technologies used thermal treatment at 600 degrees of Celicious ‎to measure the number of metals in the gas phase that was released during the process. Measuring the amount of solid metals is usually done at the end of the thermal process.

You can see a fluidized bed reactor for thermal treatment of used solar cells in the figure below:

Chemical treatment is usually perfumed after thermal treatment, just like the process shown in the diagram below:

As you can see, after the separation process of PV cells using the thermal treatment, PV materials will be entered into the chemical process.

Another important part of this procedure is hazardous gas emissions, which are common between thermal and chemical processes. This is actually one of the critical problems with recycling PV panels.

Pros and cons of recycling technologies

The first one includes:

The second technology, on the other hand, includes:

Sustainability and eco-efficiency of recycling processes

It is also good to know about the sustainability and eco-efficiency of recycling processes.

Eco-efficiency considers a product’s entire life cycle, including total energy consumption, environmental impact, and finally, the recycling process is compared with the market value of the product.

The eco-efficiency of recycling processes varies significantly. For example, when using shredders and waste incineration, the recycling rate for materials like Al, Cu, and glass is really low. Moreover, the final products will not meet quality standards.

If we want to achieve a sustainable recycling system, the eco-efficiency of the recycling process should be so high that the value of recycled products is realistic.

The rate of increasing end-of-life solar panels in the world is higher than the progress rate of building infrastructure and recycling plants. This will lead to an environmental disaster unless this trend changes. A concerted effort is needed by social and political organizations to boost the procedure of establishing an effective recycling system to decrease the danger of solar cells disposal as much as possible.

Hossein Karami Lakeh is an engineer interested in different aspects of energy, especially renewable energy technologies. He holds a master’s degree in mechanical engineering, focusing on thermo-photovoltaic systems. He has written several articles for valid ISI journals, international conferences, and high-authority websites to share his ideas on how to make the world a better place to live.