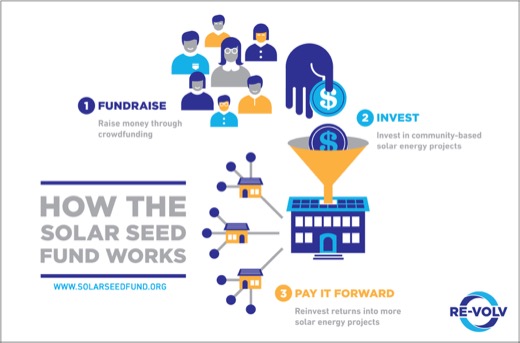 Last month, we profiled RE-volv, an innovative solar funding platform that had just launched a crowdfunding campaign to bring solar to a worker-owned cooperative grocery store in outer San Francisco.

RE-volv’s mission brings a twist on both solar financing and crowdfunding: As I wrote last month, the non-profit purpose is:

To create a self-sustaining solar investment fund that supports solar installations for nonprofits and cooperatives that otherwise have a difficult time securing solar financing. The group, which has completed two projects and has Other Avenues’ system underway as its third — offers solar leases and puts the funds generated by that lease, as well as the donations from community members, into a revolving fund that generates interest to support future solar installations.

And so the good news is that the Solar Seed Fund successfully raised $50,002 for the Other Avenues solar installation, surpassing its goal of $48,000 raised. While the installation was always going to proceeded no matter how much money the community raised, the success means that the fund can continue to grow and finance new systems.

solar seed fund“People are sick of waiting for leaders to take action on climate change. They want to lead the way in their own communities and RE-volv is giving them a tool to do that.” Andreas Karelas, Executive Director of RE-volv, said in a statement. “Having completed three successful campaigns, we see that this model is replicable and poised to grow rapidly.”

The group has also gained some impressive attention in recent days — which both helped them reach their crowdfunding goal and also bodes well for their future growth. In the run-up to Global Fossil Fuel Divestment Day last week, the climate change leader Bill McKibben gave a plug to RE-volv on Twitter, noting, “As everyone’s divesting, might be worth donating a little money to this Solar Seed Fund.”

RE-volv has also earned a place in the winner’s circle of the OpenIDEO Renewable Energy Challenge launched by innovative design firm IDEO. By being selected as one of the top ideas in that competition, RE-volv will get support in spreading its message from IDEO and the 11th Hour Project, an environmental foundation that’s funded by Google co-founder Eric Schmidt.

As I noted in the profile last month, RE-volv has big plans for the future of the Solar Seed Fund, including already-launched efforts to expand outreach (and solar panel installations) to members and chapters of the Audubon Society and to train “solar ambassadors” on college campuses. The group also hopes to create its own custom-built crowdfunding platform to help further its reach, which the additional support from IDEO and the Schmidt Family Foundation will no doubt help achieve.

In the meantime, there’s still the matter of installing those 36 kilowatts of solar panels on Other Avenues’ rooftop. RE-volv relies in part on volunteer efforts to install their systems (and to get even more people excited about going solar). If you’re in the Bay Area and want to pitch in during the installation, from 2/28 to 3/8 — or to get involved in future solar installations — check out the RE-volv website for more information, or visit the website of their installer partner, Sunwork.