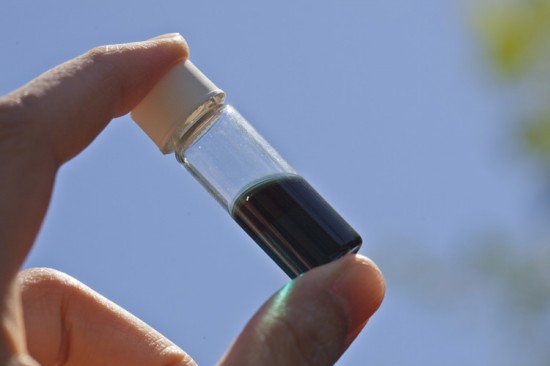 An organic or “plastic” solar cell is a type of a solar cell made with polymers that converts light to electricity using carbon-based molecules. These solar cells have not yet been to match the efficiency of their silicon-based counterparts. Now, researchers at the University of Washington have discovered a synthetic, high-performance polymer that behaves differently from other tested materials and could make inexpensive, highly efficient organic solar cells a reality.

“In most cases you are generating charge but you have to out-compete all the areas of loss that keep you from delivering the electricity from the cell to the device you are trying to power,” said Cody Schlenker, a postdoctoral researcher in the laboratory of David Ginger, a UW chemistry professor.

“These materials can be printed like newspaper and manufactured into rolls of film like plastic wrap, so they could have a significant manufacturing cost advantage over traditional materials like silicon,” Ginger said.

The lead authors are Akshay Rao and Richard Friend of Cambridge, who with Cambridge researchers Philip Chow and Simon Gelinas did sensitive measurements that confirmed the properties of the polymer. The material was created in the lab of co-author Alex Jen, a UW professor of materials science and engineering.

Organic solar cells change color briefly as they convert light to electricity, similar to how some prescription glasses darken when exposed to sunlight and become clear indoors. The researchers used a technique called photo-induced absorption spectroscopy to measure the color changes as “fingerprints” to study pathways that devices use to convert sunlight to electricity.

The same technique also pinpoints “dead-end” pathways that do not produce electricity, which are present in most organic materials used for solar cells and limit power production. UW scientists were surprised when their polymer appeared to have few dead ends, but they needed more sensitive measurements to be sure.

Cambridge researchers had seen hints of the same kind of behavior in similar materials that could be used in organic solar cells.

At a scientific meeting in Italy last year, the two groups began discussing the apparent surprising properties of the UW-created polymer, composed of carbon, hydrogen, sulfur and nitrogen atoms. The Cambridge researchers used lasers to probe the polymer and saw clear evidence of the behavior that had only been hinted at in other materials they had studied.

They found that the apparent lack of electrical dead ends in the new polymer is related to a quantum mechanical property of electrons called “spin.” Essentially, with certain spin configurations the material can “rescue” electrical charges from what otherwise would be energy-losing pathways.

Currently, organic solar cells can achieve as much as 12 percent efficiency in turning light into electricity, compared with 20 to 25 percent for silicon-based cells. Schlenker believes design concepts based on the new material will help to significantly close the gap between these two types of solar cell.

Organic materials are semi-transparent and tunable to any color, and their flexibility and ease of production mean that achieving greater efficiency in changing light to electricity could make them cheaper and easier to deploy than the silicon-based cells.

The carbon-based molecules in the organic polymers are similar to molecules already found in car paints, some clothing dye and the pigment in plant chlorophyll. Organic dyes could be incorporated into ink and printed on materials such as shingles, siding or window frames.

Current materials are relatively low cost and recyclable. Work to extend their lifespan beyond five to seven years and to find ways to replace them relatively easily could make them a feasible option for a home or business, Schlenker said.

Solar cells now provide less than 0.2 percent of power used in the United States, but improving efficiency and finding ways to incorporate them into building materials is one way to make them cost-effective.

“You have to go in the direction of adding no cost to the material you already are planning to deploy,” Schlenker said.