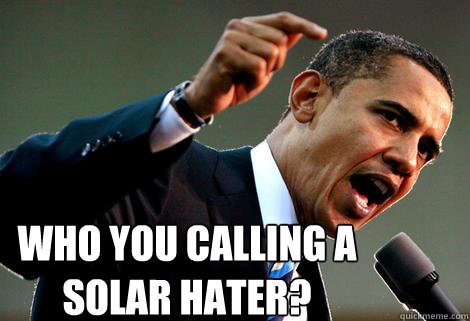 President Obama used to campaign on his theme of hope and change.  Despite numerous political hurdles and geopolitical events that have diverted his attention since his 2008 election, it can proudly be said that the president has taken another step towards bringing about positive change. In his second State of the Union address, President Obama lifted the hearts of environmentally-conscious people everywhere with his bold statement “For the sake of our children and our future, we must do more.  But if Congress won’t act soon to protect future generations, I will. I will direct my Cabinet to come up with executive actions we can take, now and in the future, to reduce pollution, prepare our communities for the consequences of climate change, and speed the transition to more sustainable sources of energy.”  Though the rhetoric was there, actual change was certainly slower in coming to fruition.

Today, President Obama issued an executive order(bypassing the inefficiency of Congress) to mandate that the federal government (including the military) triple its use of renewable energy by 2020, at which point renewable power would provide 20 percent of the government’s energy.

According to the Associated Press, “The government occupies nearly 500,000 buildings, operates 600,000 vehicles and purchases more than $500 billion per year in goods and services.”

Obama wants to set a good example for the rest of the nation as the government is the largest consumer of electricity in the country.  Critics of Obama who often level the charge that the president “leads from behind”, should be satisfied with the president’s display of leadership and decisive attitude exhibited here.  The military already had an existing plan in place to receive 25% of its energy needs from clean, renewable sources by 2025, so while this order will not necessitate that the military receive a greater share of its energy from renewables by 2025, it is likely that this action will speed up the energy transition and perhaps even raise the bar by then.

It is great that action is being taken and our nation’s leadership has made it a priority to combat climate change by utilizing more green energy, but it is important to pay attention to all of the aspects of the edict.  The executive order states that, the federal government comply “to the extent economically feasible and technically practical,” so its not hard to foresee potential complications considering the annual budget crises and differing list of priorities among decision makers in Washington.

Changing the world vs. climate change

There is no doubt that President Obama seeks to leave an indelible mark on the United States and the world.  Climate change and its requisite adaptation present one of the largest financial opportunities of all time.  But this is about more than just a financial opportunity that individuals and companies can stand to profit from through smart investing and the right foresight; it’s also about the security of our nation.  Admiral Samuel J. Locklear III, the head of the U.S. Pacific Command, cited climate change as “probably the most likely thing that is going to happen … that will cripple the security environment, probably more likely than the other scenarios we all often talk about.”  The US Department of Defense (DoD), which includes the military, is one of the largest energy consumers on the planet and thus its conversion to clean energy will have effects that cannot be overstated.  Using statistics from the 2006 edition of the CIA World Factbook, if all electricity used by the DoD were to be shut off and used elsewhere, it would be enough to power 2.6 million average American households.  For a slightly different comparison, if the DoD were a country, it would rank 58th overall in total electricity consumption, just below Denmark and above Syria.

So what’s already being done to shrink the energy bill?

The “Net Zero Energy” Initiative is the Army’s brainchild to diminish its carbon footprint.  On some bases in America, the installations “will aim to produce as much energy, water, and waste as they consume. Cost and reliability are the primary reasons, but cutting carbon pollution will be one of the outcomes” according to Emily Atkin of Think Progress.  If you are like the majority of Americans who don’t live on a military base, but would like to participate in the clean energy revolution, Mosaic presents an option to invest in solar panels and make your money work even harder.